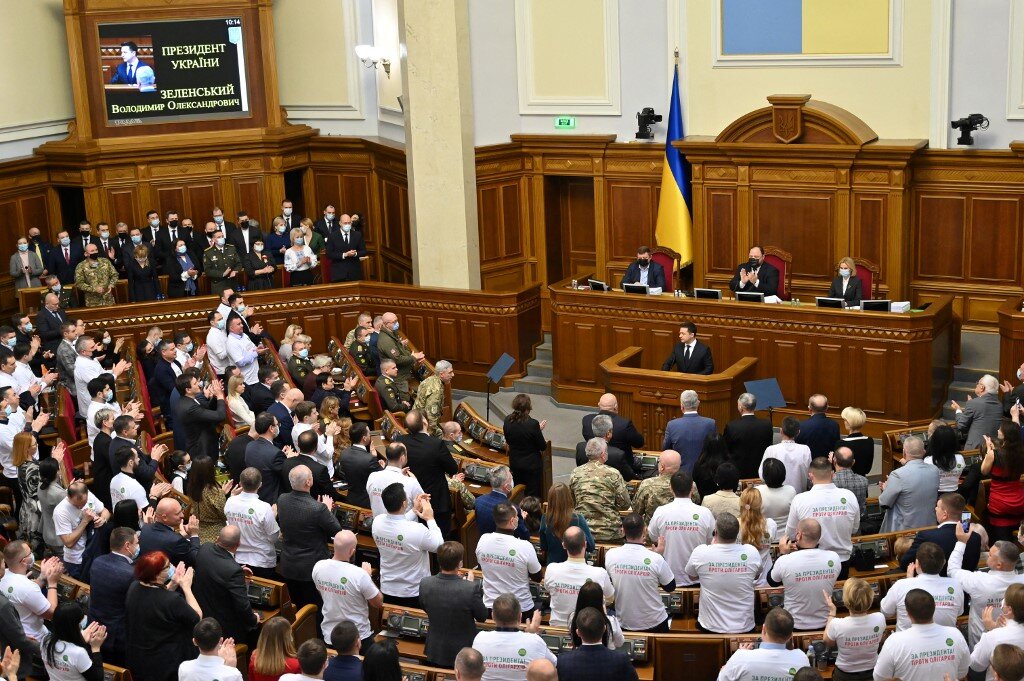 December is a very specific period in the calendar of Ukrainian politics. From time to time, specifically at the end of November and in December, we had major political crises and even revolutions.

However, usually, Ukrainian politicians, like ordinary citizens, prefer to forget about political scandals and conflicts over the Christmas and New Year holidays, and are willing to get distracted from them.

Politicians are also people and they want to get some rest as well. It’s no coincidence that there’s a Ukrainian proverb which says “Ukrainian Ramadan – from Roman to Jordan,” meaning from the saint’s day of Roman (Dec. 1) to the Feast of the Baptism of the Lord (Jan. 19). It is a long period of New Year’s holidays, and from the end of December to the first week of the New Year, there are also informal New Year and Christmas holidays, including political ones.

At this time, all the conflicts related to the politicians are on “holidays” as well. The ongoing confrontations that have defined the content of the political process in recent months have not been resolved, either. They are only postponed.

The parliament either didn’t have time or couldn’t approve a new version of the law about Kyiv – the capital of Ukraine. Therefore, the question has been left open as to whether the mayor of Kyiv Vitaliy Klitschko will be fired from the post of the Head of Kyiv City State Administration, and how the relations between the central and city authorities in Kyiv will develop.

On Dec. 17, investigators from the State Bureau of Investigation attempted to serve a summons to interrogate MP and former President of Ukraine Petro Poroshenko, but he ignored them and left the Verkhovna Rada. On the same day he left Ukraine. Some sources claim that he was afraid of being arrested. On Dec. 20, law enforcement officers sent a notice of suspicion about Poroshenko’s alleged treason and assisting in the activity of terrorist organizations regarding the case of supplying coal from the temporarily occupied territories of Donetsk and Luhansk oblasts, and with payments in cash for terrorist organizations from the “DNR” and “LNR.”

But, most likely, Poroshenko will have a long procedural epic regarding this case. And the aim is not to imprison Poroshenko but to discredit him because of the treason in which he was figured together with pro-Russian politician Viktor Medvedchuk. In this case, the process is more important than the result. From the political and technological point of view, the culmination of this process is better to plan closer to the presidential election.

In any case, the “dilemma of Poroshenko,” whether to imprison him or not, remains relevant for the current Ukrainian government.

The majority of President Volodymyr Zelensky’s supporters want the court to punish the fifth president of Ukraine. But this can provoke both domestic and foreign political risks. However, experts in the Ukrainian legal and judicial systems ironically say that according to the current legislation and the present state of courts and law enforcement agencies, it is impossible to imprison any influential person in Ukraine.

Apart from that,  Poroshenko can be valuable for Zelensky as an acceptable sparring partner for the second round of the presidential election (at least, based on the current electoral ratings). Therefore, the Office of President Zelensky does not have a definite answer to the question regarding what to do with Poroshenko. Nevertheless, political, legal and informational competition with him will continue. And it will be going on for a long period of time, at least until the presidential election in 2024.

The biggest intrigue is related to the main domestic political conflict of the recent months of 2021 – the confrontation between the richest Ukrainian oligarch, Renat Akhmetov, and President Zelensky. Multiple informed sources claim that the two sides are negotiating with each other, albeit through intermediaries. However, recent events show that the informational and political war between Akhmetov’s and Zelensky’s teams continues. Akhmetov’s TV channels have renewed attacks on Zelensky and his entourage. And the president signed bill №5600, which increases the tax burden on the metallurgical business of Akhmetov. During the New Year holidays, there will be a pause in the confrontation. But what will happen next?

There are rumors that both Akhmetov and other opponents of President Zelensky (from Medvedchuk to Poroshenko) want to provoke a sharp parliamentary crisis, destroying the majority in the Verkhovna Rada (“buying out” members of the presidential fraction) and in that way to force the president to call an early presidential election. But the dismissal of the parliament and announcement of the pre-term election of the Verkhovna Rada is the right but not the duty of the Head of State.

At the moment, it is extremely disadvantageous for Zelensky to run in an early presidential election. It is unlikely that he will do that under pressure from political opponents. And if he will see the reduction of his one-party majority by Akhmetov’s side, he will be forced to rapidly activate administrative and legal pressure on the business structures of the richest oligarch. “In war, as in war”. But this war can become a huge problem for both sides in the confrontation and can significantly weaken both the president and the main oligarch. From a rational point of view, it is better for them to agree and conclude a sort of “non-aggression pact.”  But how stable would this “pact” be and could it survive until the next elections?

The New Year’s armistice is expedient for Ukrainian politicians for another very important reason. The Kremlin is concentrating a large military contingent on the Ukrainian border and blackmailing the West with the threat of an invasion of Ukraine. It is obvious that the risks of Russian aggression could significantly increase in case of a sudden domestic political crisis (similar to 2014). Therefore, in the face of such danger, the best would be for Ukrainian politicians to postpone their conflicts for a while and address the urgent challenge of standing up properly to the aggressor.