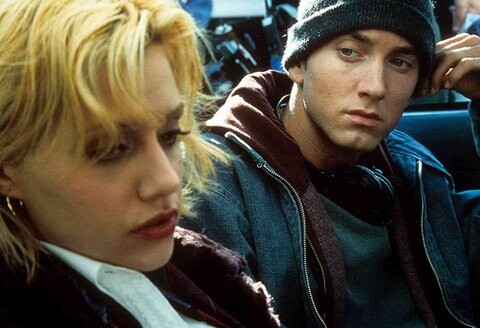 The movie left out how Aunt Honey (in real life named Hansone Washington) abused her young nephew James Brown while he was growing up inside her brothel. Apparently she was always telling him how ugly he was, and she made him hide in the closet whenever customers came over. Washington’s brother Melvin also abused Brown, and once hanged the boy from the ceiling so he could beat him with a belt.

Sure, 8 Mile isn’t billed as a biographical film … even though it contains a myriad of autobiographical facts and elements of Eminem’s life. So we’re including it, because the relationship between Jimmy (Marshall Mathers) and Alex (Brittany Murphy) is clearly based on Mathers and Kim Scott, just different in some noted ways.

In the movie, Jimmy is 23 and Alex is clearly an adult, too, but in real life Mathers was 15 and Scott only 13 when they met and hooked up. Said Mathers mom in her 2008 memoir: “He introduced her as Kim Scott and said she needed a place to stay. I was happy to help out. Kim said she was 15 and I had no reason to doubt that. In truth, she was so cute and busty that she could have passed for 17.” Mama Eminem only learned Scott’s true age when truant officers came around to investigate why Scott wasn’t attending school any more.