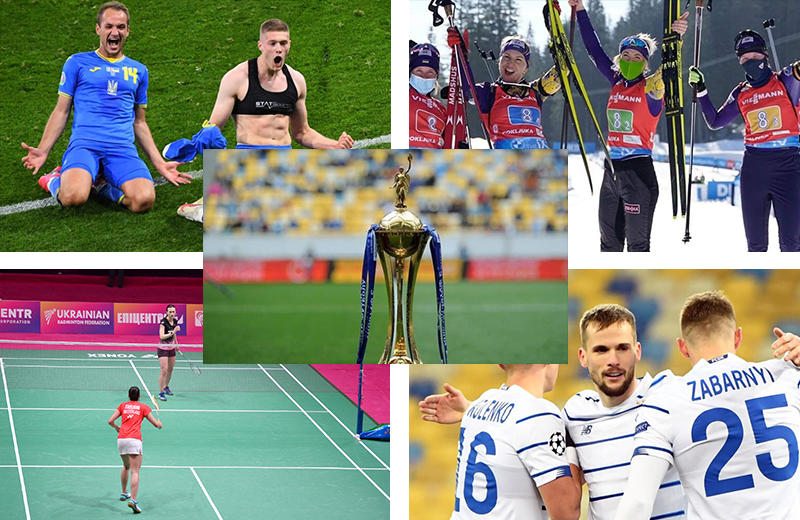 With EURO 2020, the Olympic Games, and big-time PPV boxing events, 2021 was a memorable year in Ukrainian sports. Here’s a look back at some of the biggest moments of 2021.

Ukraine’s women’s biathlon team made sure that 2021 started in style by putting in their best performance of the season at the Biathlon World Championships in Pokljuka, Slovenia. Rising to the occasion, the team of Anastasiya Merkushyna, Yuliia Dzhima, Darya Blashko, and Olena Pidhrushna fought off teams from Belarus, Poland, and France to finish bronze – less than 10 seconds behind gold medal-winning Norway. Biathlon is the most popular winter sport in Ukraine, and the women’s biathlon team is one of the country’s most beloved – especially after Dzhima and Pidhrushna helped the team win gold at the 2014 Olympic Games in Sochi, Russia. The men’s team nearly replicated the feat later in the day, but missed shots at the final target dropped the team from the podium to fifth place.

Move over A’ja Wilson and Breanna Stewart – because the best women’s basketball player on the planet is Ukrainian – and her name is Alina Yagupova. Averaging over 20 points per game, the 29-year-old superstar was named EuroLeague MVP for the second straight season after leading her Fenerbahce team to a third-place finish in the most prestigious tournament on the continent. The national team captain later lifted Ukraine to big wins in EuroBasket qualification over Finland and favoured France, where she leads the tournament points. Talented enough to dominate the WNBA, Yagupova chose the EuroLeague for its more lucrative contracts.

213 athletes from 36 European nations flocked to the Ukrainian capital for the rescheduled European Badminton Championships in late April. The original event was set for a year earlier before the COVID outbreak forced its postponement. While Ukraine didn’t manage to win a medal at home, badminton fans were still able to see some of the world’s finest players, including Denmark’s Viktor Axelson and Anders Antonsen, who met in the final. Unfortunately, the highly anticipated match didn’t happen, as Axelson handed the title to his teammate by walkover. Later in the season, Axelson became the only European to win gold at Tokyo 2020. Denmark topped the table in Kyiv with seven medals, highlighted by Antonsen’s gold in the men’s singles tournament.

Dynamo Kyiv capped a largely successful 2020-21 season by capturing its 13th Ukrainian Cup in dramatic fashion after midfielder Viktor Tsyhankov scored the decider against Zorya Luhansk in the 98th minute at Ternopil’s City Stadium. It was the first time the title game was played in the Western Ukrainian city after it was forced to relinquish its hosting rights in 2020 due to the COVID pandemic. Dynamo’s victory means the team matched Shakhtar Donetsk’s record-setting 13 titles – and it nearly never happened. Dynamo almost unceremoniously crashed out of the all-Ukraine tournament in the quarterfinals, needing penalties to get past city rival Kolos Kovalivka. Zorya also needed penalties to reach its second Ukrainian Cup final, edging Oleksandrya in a tense semi-final.

In one of the year’s most enduring moments in sports, the Ukrainian national football team provided a run to remember at Europe’s biggest sporting event by reaching the quarterfinal, harkening back memories of the team’s unforgettable run to the 2006 World Cup quarterfinal. Expectations were running high heading into the tournament as the team went undefeated in qualifying, winning six of eight games, and had beaten powerhouse Spain just six months earlier.

The tournament got off to a wild start as Ukraine battled back from 2-nil down to a strong Dutch team – in Amsterdam – before pulling even with second half markers by Andriy Yarmolenko and Roman Yaremchuk. The team threw away the inspired comeback by conceding a deflating 85th minute goal in the wildly entertaining game. A lackluster 2-1 win over North Macedonia and a poor 0-1 loss to Austria meant Ukraine had to rely on a Denmark win over Russia to make the playoffs. The Danes came through and thrashed the Russians 4-1 to send Ukraine to the playoffs.

The Ukrainians made use of the help by getting past group-winning Sweden in a nervy Round of 32 encounter. Ukrainians across the country gathered at outdoor watch parties and had something to celebrate early when Ukraine went up 1-0 on a goal by Oleksandr Zinchenko. Sweden tied the game before half and the teams played scoreless through 90 minutes to set-up the tense overtime. Just when it looked like the teams were headed to penalties, Artem Dovbyk sent the country into a tizzy with a 120+1 minute marker that will go down as one of the most memorable in Ukrainian history.

The unforgettable run to the quarterfinal ended in forgettable fashion when the team fell to EURO 2020 runner-up England 4-1, but the incredible images of Dobyk’s late winner against Sweden will be remembered for generations.