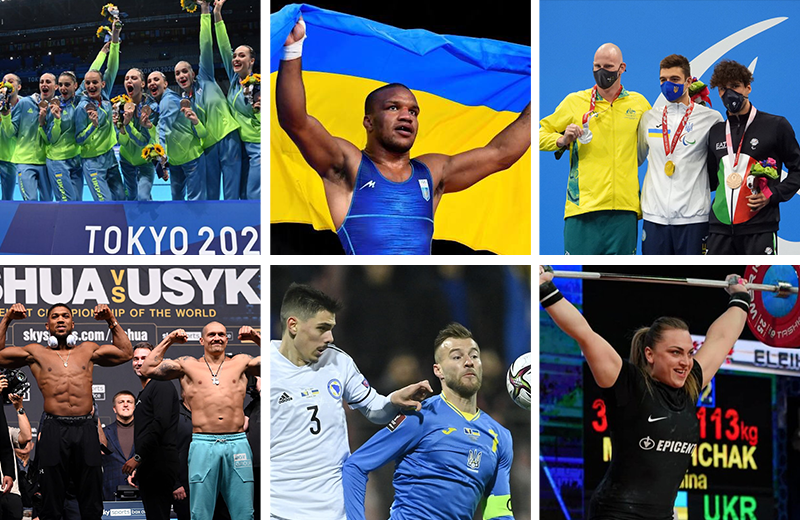 The first six months of 2021 were dominated by football and biathlon. Ukraine’s Olympians, Paralympians, and world-class boxers took center stage during the second half of the year.

You can’t talk about the year in sport in 2021 without talking about the 2020 Olympic Games – file that under “things you only hear during a pandemic”. In the busy year in sports that the postponement of so many sporting events from 2020 necessitated, none was bigger than Tokyo 2020 – and our Ukrainian athletes showed up to play. From Daria Bilodid’s emotional bronze medal on July 24 to Olena Starikova’s stunning silver hours before the Closing Ceremonies, Ukrainian athletes did the nation proud and provided unforgettable memories for the fans back home.

Ivano-Frankivsk’s Lyudmila Luzan proved to be a revelation in Tokyo, winning a silver and bronze in women’s canoe. Rivne’s Mykhailo Romanchuk set a world record on his way to a silver and bronze in 1500m and 800m swimming. Just days after getting married to French tennis star Gael Monfils, Odesa’s Elina Svitolina provided a comeback for the ages to claim bronze in women’s tennis, while teenager Yaroslava Mahuchikh bested teammates Iryna Herashchenko and Yuliya Levchenko for bronze in the women’s high jump. 37-year-old Ihor Reizlin’s bronze in his first Olympic Games proved a testament to perseverance.

But the defining moment for Ukraine came in greco-roman wrestling on Aug. 4 when Zhan Beleniuk added Olympic champion to his impressive resume by dominating Hungary’s Viktor Lorincz 5-1 to better the silver medal he won at Rio 2016. Beleniuk’s impressive win was the only time the Ukrainian national anthem was played in Tokyo after boxer Oleksandr Khyzhniak got caught by a punch late in the final round of a fight he had dominated to let gold turn into silver.

Still, Ukraine’s 19 medals nearly doubled its performance from 2016’s 11, with none more impressive than Beleniuk’s authoritative gold in wrestling.

Is there an event that Ukraine dominates as much as the Paralympic Games? Ukraine’s Paralympic team has finished in the Top 5 at every Paralympic Games – Summer or Winter – since 2002. Every day in Tokyo Ukrainian Para athletes shone on the world’s biggest stage, showing their talent, athleticism, and perseverance on the way to an incredible 98 medals!

No athlete shone brighter than Kharkiv’s Maksym Krypak – not just in Ukraine, but throughout the world. The speedster swimmer won an incredible seven medals, including five gold, to become Tokyo 2020’s most successful athlete. Along with the eight medals (five gold) he won at Rio 2016, Krypak became one of the most successful Para athletes of all-time.

There were plenty of feel-good stories to go around. Straight from the red carpet in Kyiv, where a feature film (‘Pulse’) about her life story was playing in cinemas, Dnipro’s 2008 Paralympic champion Oksana Boturchuk added three more silver medals in athletics to her incredible trophy case. 2016 Olympic champion Roman Polianskyi – an IDP from Donbas – added a second straight Paralympic gold in rowing, while Ukraine’s swimming team – powered by Krypak’s seven medals – won an incredible 43 medals!

On his return to Ukraine, President Volodomyr Zelenskyy awarded Krypak the title Hero of Ukraine.

In one of boxing’s most highly anticipated and lucrative matches of 2021, Ukraine’s former undisputed cruiserweight champion of the world Oleksandr Usyk finally got his crack at the heavyweight title when he faced Great Britain’s Anthony Joshua for the IBF, WBO, and WBA titles on Sept. 25 – and he made it count. Usyk became only the third undisputed cruiserweight champion to become heavyweight champion, joining legends Evander Holyfield and David Haye. He also became Ukraine’s first heavyweight champion since Tyson Fury took Volodomyr Klitshko’s titles in 2015. It was a masterclass performance by the 2012 Olympic champion, who delighted Ukrainian fans with a convincing win over the former champ – and by dancing his trademark Hopak in the ring afterwards. Usyk will likely have to beat Joshua again before getting the chance to end Fury’s reign as WBC and The Ring heavyweight champion later in 2022.

It’s not often a boxer in Ukraine can say they’ve done something that the great Vasily Lomachenko never could, so chalk one up for Odesa’s Yuriy Zakhareyev. The 19-year-old won his first world championship to become Ukraine’s youngest-ever world champion, besting 19-year-old Loma’s silver at the same age. Zakhareyev burst into boxing’s consciousness in April when he beat Russia’s Cherav Ashalayev to become the World junior champion. He looked even sharper at the world championships, where he beat six fighters in 12 days to become the light middleweight world champion. Zakhareyev made it look easy, winning five of the fights 5-0, including the crushing final win against 28-year-old Russian champion Vadim Musaev. Zakhareyev now joins 2017 world champion Oleksandr Khyzhnyak as gold medal favourites for Ukraine at the 2024 Olympic Games in Paris.

It was a World Cup qualification campaign to forget for Ukraine as the team continually squandered points against inferior competition. In fact, it was something of a revelation that the team was still in contention on the final day of the Group Stage. Needing a win on the final day against Bosnia-Herzegovina, combined with a Finland loss to France – plus some help in the goals difference department, for once – all the cards fell kindly for the yellow-and-blues. After scoreless first halves in both games, Ukrainian fans were on edge until Oleksandr Zinchenko broke through to give Ukraine a 1-0 lead. By the time EURO 2020 hero Artem Dovbyk put the side ahead 2-0 in the 79th minute, France had already scored twice to see Ukraine through to the playoff round.

Ukraine still needs to win two games to qualify for the 2022 World Cup in Qatar – against Scotland on March 24 and the winner of Wales / Austria on March 29, but the fact they even made it this far is something to celebrate.

December 12 – Lomachenko shines in bid to win back belts

It was a big 2021 for Ukraine’s two-time Olympic champion Vasiliy Lomachenko as he put together two important wins after losing all his lightweight belts to American Teofimo Lopez in late 2020. He first got by Japanese challenger Masayoshi Nakatani with a ninth round TKO in June to set up an all-important fight against Ghana’s Richard Commey for the vacant WBO Inter-Continental lightweight title. The bout came just days after Lopez was stunned by Australian George Kambosos Jr., meaning the winner of Loma-Commey would likely be in line for an undisputed title shot in 2022. Loma shone in the primetime event at New York City’s iconic Madison Square Garden, pummeling Commey and dropping him in the seventh round. While Commey withstood the barrage to make it to the end, Loma’s convincing win should see the former undisputed champ get his shot to win his titles back in 2022.

In late 2021, 24-year-old sensation Alina Marushchak gave Ukrainians something to cheer about by becoming the country’s first woman to win a world championship in weightlifting at the World Weightlifting Championships in Uzbekistan. Hopes were high after the 2019 European junior champion claimed her first European championship in April. In a dominant display, she lifted 5 kg more than her European championship-winning weight on her very first lift in Tashkent to show she meant business. Marushchak went on to win gold in the Snatch, Clean & Jerk, and Overall events to become Ukraine’s first all-around weightlifting champion since Timur Taimazov in 1994.