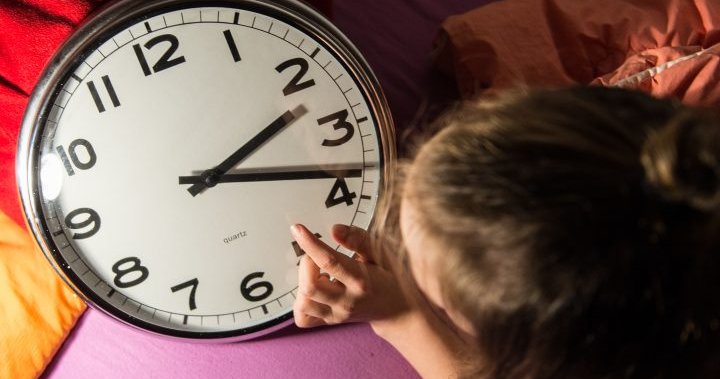 Did you wake up this morning feeling a bit confused or disoriented about what time it was? You’re not alone.

Clocks were set an hour back at 2 a.m. in most time zones across Canada as the switch from daylight saving time (DST) — also known as summer time or daylight time — to standard time kicked in on Sunday.

Read more:
Daylight saving time 2021: Here’s when to turn your clocks back and how it started

The bi-annual flip — clocks are set an hour forward in March — has become a controversial topic, with several provinces wanting to do away with the century-old practice.

The idea behind DST is to conserve energy and make better use of daylight during spring and summer when the days are longer.

Because the change leads to a mismatch between the local clock and our body’s internal clock, it can have measurable impacts on health, including sleep loss and heart problems, experts say.

“We shouldn’t be putting ourselves through this twice a year,” said Colleen Carney, a Ryerson University professor and sleep specialist.

“When there’s a change in either direction, it does show you how the body struggles with irregularity.”

From a health perspective, there is growing consensus that staying on permanent standard time year-round is the best option as this allows our natural body clock to be closer to the social clock.

Wendy Hall, a registered nurse and professor emeritus at the University of British Columbia, said the switch is “very hard on people’s biological rhythms.”

“We should be on one system for the whole year and not switching back and forth,” she said.

What DST does to the human body

Carney described daylight time as a “real-world experiment to simulate jetlag.” It’s the same feeling we get after a long flight that results in a change in time zone.

“Your body is actually expecting one time and it gets a different time,” said Carney.

While the body adjusts to the new time, we end up feeling symptoms of jetlag, which may include mental and physical fatigue, she explained.

People might have difficulty sleeping or waking up. And if you aren’t sleeping well, your metabolism takes a hit, along with your eating routine.

Hall called it “social jetlag” and it is also associated with increased risk of obesity, problems with diabetes, cardiovascular disease and depression, she said.

4:35
Daylight Saving Time and your health

Daylight Saving Time and your health

Then there is the issue of light exposure.

The shift in spring, when we move our clocks ahead by an hour, means less exposure to light in the morning and greater exposure to evening light, said Hall.

This can cause people to go to bed later, and in the presence of continuing social or occupational demands, result in sleep loss and some sleep debt, she added.

Patricia Lakin-Thomas, an expert on chronobiology and York University professor, said we ideally want to have the sunrise close to the time when we normally get up so that we can get considerable light to reset our body clocks.

Because our internal clock runs a bit slow, we need the dawn light as a warning signal to reset our clock every day so that we can be in step with the day and night cycle, she explained.

What does the research show?

There is a growing body of research that points to the negative impact daylight time can potentially have on our health.

A 2019 report published in the Journal of Clinical analyzed seven studies that included more than 100,000 participants. It found that there was an increased risk of heart attack in the weeks following the spring and fall DST transitions.

A 2016 nationwide study in Finland — published in the Sleep Medicine journal — showed that stroke-related hospitalizations increased during the first two days after the switch.

Meanwhile, another 2020 analysis of U.S. and Swedish data published in the PLOS Computational Biology journal suggested there was a greater risk of immune-related diseases, digestive system disorders, infections and injuries associated with the spring shift.

A number of studies point to a rise in car accidents on the first workday after daylight time.

A 2011 analysis of police statistics by Global News showed that on average, nine more pedestrians were hurt or killed in Toronto in the week after the fall time change than in the weeks before or following.

In the United States, the spring transition to DST increased the risk of fatal traffic accidents by six per cent, according to a 2020 study published in the journal Current Biology.

“One hour switch in the spring can lead to a lot of short-term health effects … things like increases in car accidents and workplace injuries,” said Lakin-Thomas.

“We even have some evidence that judges give out harsher sentences in the spring for a few days right after the time change probably because they’re a bit sleep deprived and a bit cranky because of the jetlag,” she said.

While the short-term acute effects may only last a few days after the switch, the change can significantly throw off people who already have underlying health problems.

“If you have something like insomnia, for example, the further disruption that you experienced two times a year can take on a life of its own and then cause other problems as well,” said Carney.

There are also concerns about long-term implications of DST, experts say, but more research is needed.

Hall said staying out of sync with our biological clock can end up causing chronic effects that “last much longer than for the first few weeks” after the switch.

1:27
Police and ICBC worry about pedestrian safety as daylight saving kicks in Saturday

With less evening light and shortened days, Hall said there is a tendency to be less active in the evening.

The return to standard time in the fall has also been linked to depression because of sad seasonal affective disorder, where people get depressed because of shorter exposure to daylight, Hall said.

Yukon, most of Saskatchewan and some parts of British Columbia and Quebec stay on standard time in Canada.

In recent years, there has been a push to abolish daylight time in other jurisdictions.

Ontario tabled and unanimously passed a private members bill called the “The Time Amendment Act,” in 2020.

Ontario MPP Jeremy Roberts, who proposed the daylight saving bill, says he feels “optimistic” the end of daylight saving time for 2021 on Sunday could be one of the last the province experiences.

In an interview with Global News, Roberts said he’s made some good headway in speaking to Quebec and New York to move ahead with removing daylight time.

The B.C. legislature passed similar legislation in 2019, but the process has been delayed due to American states in the same time zone not having yet followed suit.

3:15
Results of Alberta referendums ​on equalization and Daylight Saving Time.

The issue of time change was also on the ballot during Alberta’s municipal elections last month.

Albertans were asked: “Do you want Alberta to adopt year-round Daylight Saving Time?” — eliminating the need to change our clocks twice a year.

More than 50 per cent said no, voting in favour of keeping with the status quo of daylight time.

Lakin-Thomas said the worst choice would be to go to daylight time year-round because that means we will be “jetlagged permanently.”

How to adjust and prepare

While it may take a few days for people to get used to the new time, the switch is harder for the children to adapt.

“Children don’t really understand this, and so what often happens in the fall is that they end up waking up at 4 a.m. instead of 5 a.m., which is pretty tough on parents when that happens,” said Hall.

In order to better prepare for the change, Hall and Carney said adjusting our clocks by 10-15 minutes over four or five days before the switch can be helpful.

7:10
How to best prepare for daylight savings and the darker days

How to best prepare for daylight savings and the darker days

In the fall, that would mean going to bed a little later than usual each night by about 10 to 15 minutes and sleeping in a little bit longer in the morning, said Hall.

In addition, it is also important to be mindful of other healthy behaviors in the day or two after the change, said Carney.

Some good alertness strategies include watching what you eat, staying hydrated and not being over-caffeinated, as well as getting natural light during the day and exercising.