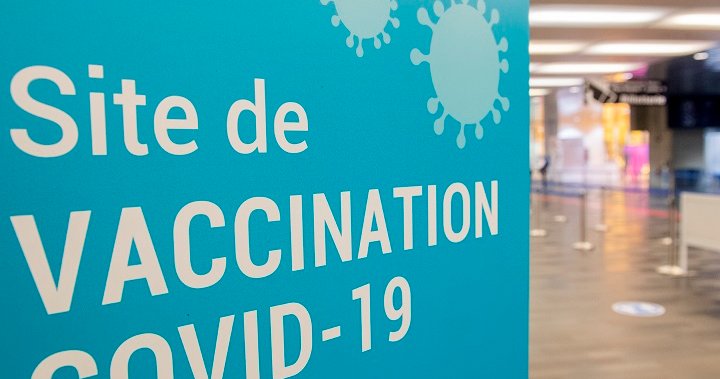 Quebec Health Minister Christian Dubé announced Tuesday the province is opening up appointments for those aged 70 and over who want a third dose of a COVID-19 vaccine.

While Health Canada approved the Pfizer COVID-19 booster shot for all adults aged 18 and over, Dubé said the province’s immunization committee is recommending its use only for those aged 70 and over.

“This recommendation is based on the fact that the vaccine protection tends to decrease slightly in people aged 80 and over,” Dubé said.

He indicated that the booster shot wasn’t mandatory, but rather for those who wish it.

Dubé said that for the time being, the province doesn’t plan on extending its offer of a booster shot to younger age groups because it’s not necessary.

“We have no evidence of diminished immunity in this large group,” he said.

The only exception will be for people who received two doses of the AstraZeneca vaccine.

“Experts are recommending a booster with an mRNA vaccine, so Pfizer or Moderna, for maximum protection,” Dubé said, stressing the safety and efficacy of all vaccines.

“I want to reassure the population, it’s not because there is worry regarding the Astra Zeneca, it’s really just to ensure longer protection.”

People having received two doses of AstraZeneca can start booking their mRNA booster shots as of Nov. 25.

Dubé warned, however, that a six-month interval is required between the last dose and the booster shot and that people should observe the proper delay before trying to reserve an appointment.

Booster shots were already being offered in the province’s long-term care homes and seniors residences and Dubé said the campaign should be over mid-November.

As for vaccinating children between the ages of five and 11, Quebec is still awaiting Health Canada approval of the Pfizer-BioNtech vaccine.

Dubé, however, reiterated that Quebec will be ready to go as soon as it gets the green light.

So far, 79.5 per cent of the total population of Quebec has received at least one dose of vaccine. That number climbs to 90.8 per cent for those aged 12 and over who are eligible to be vaccinated, while 88.2 per cent are considered adequately vaccinated.