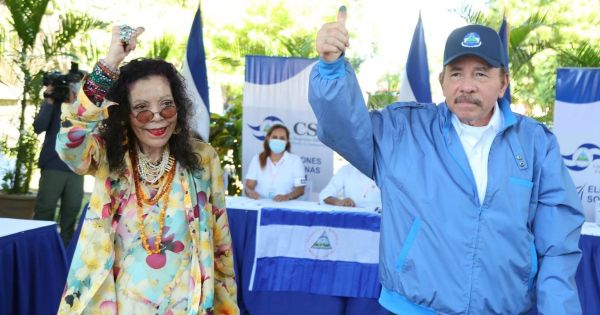 The Organization of American States (OAS) Friday received a formal request from some 40 former Latin American foreign ministers, who were against recognizing the results of last Sunday’s elections in Nicaragua in which incumbent President Daniel Ortega was re-elected.

The signatories also asked for Nicaragua’s suspension from the international body if it does not hold new, free elections with no political prisoners and candidates gone into exile to avoid incarceration.

The letter, promoted by the IDEA group, called for actions to be taken as per the OAS’ Democratic Charter. The document also expressed the former ministers’ deep concern about the illegitimate electoral process in Nicaragua.

We ask the foreign ministers of the OAS members to take measures so as not to know the election or the results, and ask for the immediate release of all political prisoners, the regional director for Latin America and the Caribbean of IDEA International, Daniel Zovatto said.

The former foreign ministers asked the OAS to ignore and condemn the elections in Nicaragua, to press for the immediate release of the 150 political prisoners and to stand up for human rights in the country.

The signatories also requested the Inter-American Commission on Human Rights (IACHR) to continue monitoring the situation and the international financial organizations to adjust their policies to Nicaragua’s attitude regarding “fundamental international obligations.

If Ortega refuses” to comply “ after a short period of two or three weeks,” the former ministers believed the OAS should “call an Extraordinary Assembly to apply Article 21 of the Democratic Charter, which establishes the possible suspension of a member state if there has been a breach to the democratic order, Zovatto explained.

Article 21 of the Democratic Charter must be applied with great urgency to suspend the authoritarian government from the OAS. This measure should have been done long ago, we are arriving late, he added as he asked that Ortega does not use political prisoners as hostages or a bargaining chip in this negotiation.

He also warned that much is at stake in Nicaragua and Latin America, because Nicaragua’s case might become a negative mirror” that ends up encouraging other countries to take the same path.

The OAS has started its 51st General Assembly Wednesday with Nicaragua as a top priority. Another key issues were COVID-19 vaccination in economic recovery in a post-pandemic scenario.

Ortega was re-elected with over 75% of the votes for a fifth consecutive term in office.