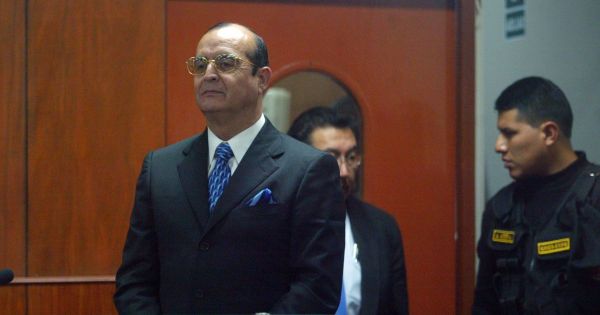 Former Peruvian Intelligence Chief Vladimiro Montesinos under President Alberto Fujimori has been sentenced to 17 years in jail for the kidnapping of journalist Gustavo Gorriti in April 1992, a Lima Court ruled Thursday.

However, Montesinos’ sentence was considered to have been served concurrently with a higher one for which he continues to be under incarceration at a penitentiary in the district of Ancón, in Lima, where he is housed since June 2001, after being convicted of embezzlement, abuse of power, bribery, or influence peddling, among other crimes.

Alongside Montesinos, José Rolando Valdivia Dueñas has been sentenced to twelve years in prison, and Luis Ángel Salazar Monroe and Alfredo Arnais Ambrosiani to ten years for complicity in the kidnapping of Gorriti.

The journalist spent two days under illegal arrest in the basements of the Peruvian Army headquarters on April 5-6, 1992, during the self-coup orchestrated by Fujimori, who with the support of the Armed Forces, dissolved Congress and seized the Judiciary after failing to obtain sufficient parliamentary support to carry out a series of economic reforms.

Thursday’s sentence was handed down by the Fourth Superior National Criminal Court for Transitory Liquidation, which also convicted 12 other former commanders of the Armed Forces for having coordinated the kidnapping of journalists and politicians during the coup.

Among those convicted are former generals José Valdivia, Julio Salazar Monroe and Alfredo Arnáiz, who were considered primary accomplices and received jail sentenced between 10 and 12 years.

Prosecutor Gino Quiroz had sought penalties of up to 20 years for some of the defendants.

The kidnapping of Gorriti, as well as of businessman Samuel Dyer, was one of the cases for which former President Fujimori was tried and sentenced to 25 years in prison in 2009, who was also considered the mediate author of the Barrios Altos massacres and La Cantuta, committed by the covert military group Colina in 1991 and 1992, respectively.

Montesinos has been in prison since 2001 for various crimes, including corruption of officials, conspiracy, forced disappearance, qualified homicide, money laundering, and particularly arms trafficking for the illegal sale, in 1999, of rifles purchased in Jordan from the Revolutionary Armed Forces of Colombia (FARC).