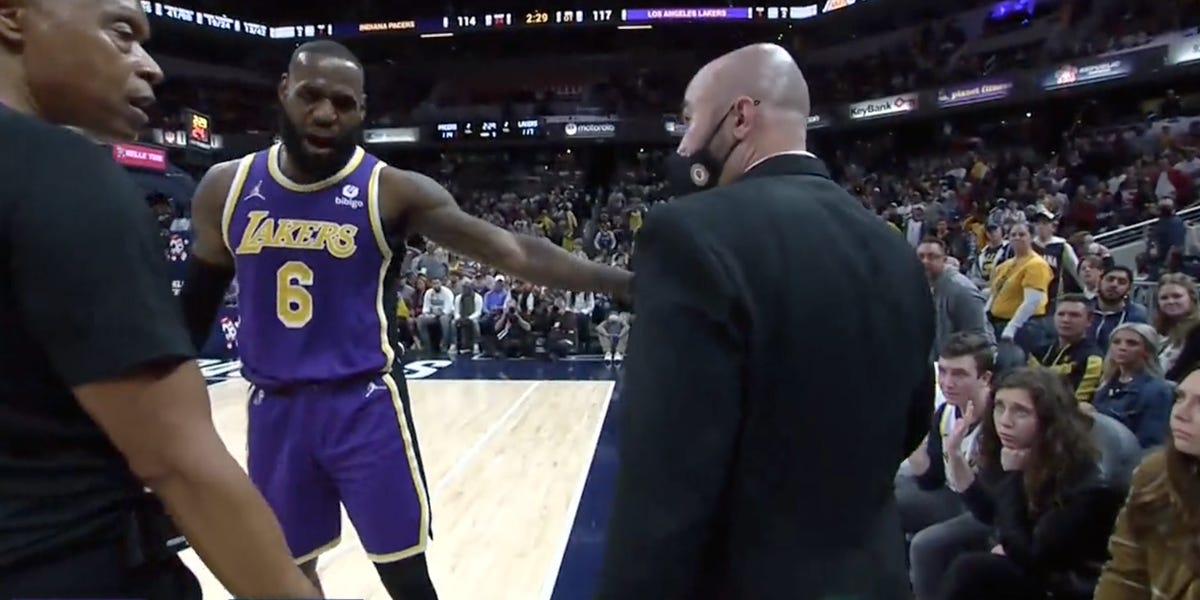 LeBron James returned from his first ever NBA suspension with a bang, getting two fans kicked out of the arena and leading the Los Angeles Lakers to an overtime win over the Indiana Pacers.

James had missed the Lakers defeat to the New York Knicks on Tuesday after being slapped with a one game ban for elbowing Isaiah Stewart in the face during a match against the Detroit Pistons over the weekend.

Against the Pacers on Wednesday, he returned to score 39 points, including eight in overtime, as the Lakers emerged 124-116 victors in Indianapolis.

Though James was involved in any on-court scuffles this time, he still wasn’t far from drama.

With just over two minutes left on the clock in overtime, the 36-year-old caught the attention of the referee and brought him to two fans sitting courtside at Gainbridge Fieldhouse.

“This one right fucking here!” James could be heard yelling as he pointed at a young man and woman, who were quickly ejected from the arena.

As the fans were escorted away, boos rang out around the arena, and the woman who was ejected made a mocking gesture pretending to cry.

Addressing the situation after the game, James said, according to USA Today: “When obscene gestures and language come into it, can’t be tolerated.

“There’s a difference from cheering for your team and not wanting the other team to win and things I would never say to a fan and they shouldn’t say to me.”

The fan ejection was the second high profile incident of James clashing with opposition fans in 2021. In February, James was involved in a heated exchange with a female Houston Rockets fan who called him a “bitch” and a “fucking pussy,” among other insults. She was ejected. James responded after the game by calling the woman a “courtside Karen.”

Speaking after the Pacers game Wednesday, James also addressed the bloody incident with Stewart that landed him a suspension.

“I mean, it’s some bullshit. But whatever,” he told reporters.