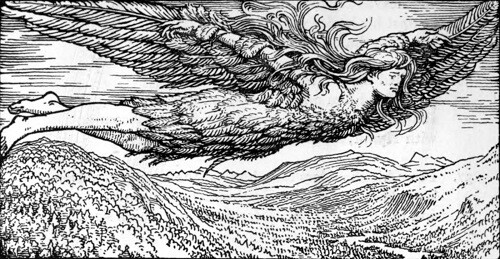 Thor Almost Drowns In A River Of Pee

Like a good percentage of Norse mythology tales, this one begins with Loki being a dick to someone who never did anything to him, just for the heck of it. The story opens with Loki, disguised as a falcon, flying into a giant’s private property and perching himself up on a wall. When the giant, named Geirrod, orders a servant to catch the “bird” loitering on his precious wall, Loki decides to stay there until the last possible second just to make the servant climb all the way up for nothing, probably planning to drop a turd on him too while he flies away.

But, as the Loki-bird flies away, the servant manages to grab him by the legs, and the price for Loki’s pointless dickery is being thrown into a chest without any food for three months. Eventually, Loki convinces Geirrod to let him go by promising to lure Thor into this place without his hammer or the “power belt” that gives him super-strength (which sounds like something made up by a ’90s action figure designer, but no, it’s real). Of course, convincing Thor to do that wouldn’t be as easy as just going up to him and saying, “Hey, let’s go on a trip into dangerous giant territory without any weapons, for no particular reason!” Instead, Loki has to … wait, no, that’s exactly what he does. Another running theme in these stories: Thor is kind of a dumbass (and he doesn’t even have Chris Hemsworth’s looks to justify it).