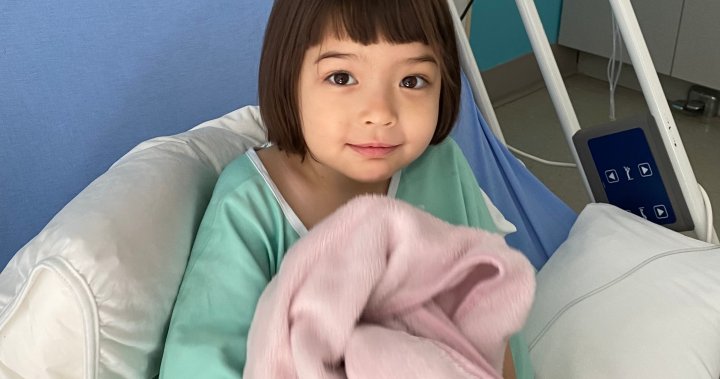 Four-year-old Minh Nguyen is just like any other young child.

She loves gymnastics, animals and playing with her friends.

But a few weeks ago, after some tests at Montreal’s Sainte-Justine hospital, she and her mother got news that she has a rare blood disease, turning their lives upside down.

“With time, she’s getting more tired,” said her mother Diem Nguyen. “She’s bleeding, she has three transfusions every week. This is the third time she’s hospitalized.”

Minh has medullary aplasia, a disease that stops the production of red blood cells, white blood cells and platelets.

Doctors say the best cure for her is a stem cell transplant from a compatible donor.

But finding a match has been difficult, because Minh is half Caucasian, half Vietnamese, and any donors need to be the same ethnic background.

Nguyen started posting about her daughter’s story to social media, and when the news reached Mai Duong, she knew she wanted to help.

She experienced a similar challenge back in 2014, when she had a relapse of leukemia.

“It’s such a terrible story and it’s not something you ever want to hear — that you don’t have a match because the stem cell registry is not represented enough,” said Duong.

Duong is now a co-founder of Swab the World, an organization committed to boosting ethnic diversity in the worldwide stem cell donor base..

They’ve created a video to raise awareness for Minh and are planning a big billboard campaign in Montreal, Toronto and Vancouver.

“We hope that people will see Minh in the metro, see that video, maybe call a friend and say hey, did you know about this story,” said Duong.

“It can happen to you, your mom — let’s help each other out and help our own community.”

Every day that Minh waits for a donor, her mom says she’s at greater risk of infection.

She can no longer live a normal life. Daycare and playing at the park with others is out of the question.

But her mom says she’s learning to adjust, and is staying strong for the both of them.

“When she sees mom crying, because mom is not strong all the time, she’s holding me and she says, ‘I’m here for you, mom,’” said Nguyen tearfully.

If you would like to find out more about becoming a donor, you can visit Swab The World website, and they will redirect you to the proper site, depending on where you live.

In Quebec, you have to be between the ages of 18-35. Elsewhere in Canada, you can become a donor at the age of 17.

Duong says women in Quebec and the rest of the country can also donate their umbilical cord to the public bank, and that can also save Minh or another life.

“It saved my life,” she said. “My cord blood was from a woman in the States. She gave birth to her baby and she saved me.

“It’s amazing what women, mothers, can do. You’re not only giving life, you’re giving life twice.”