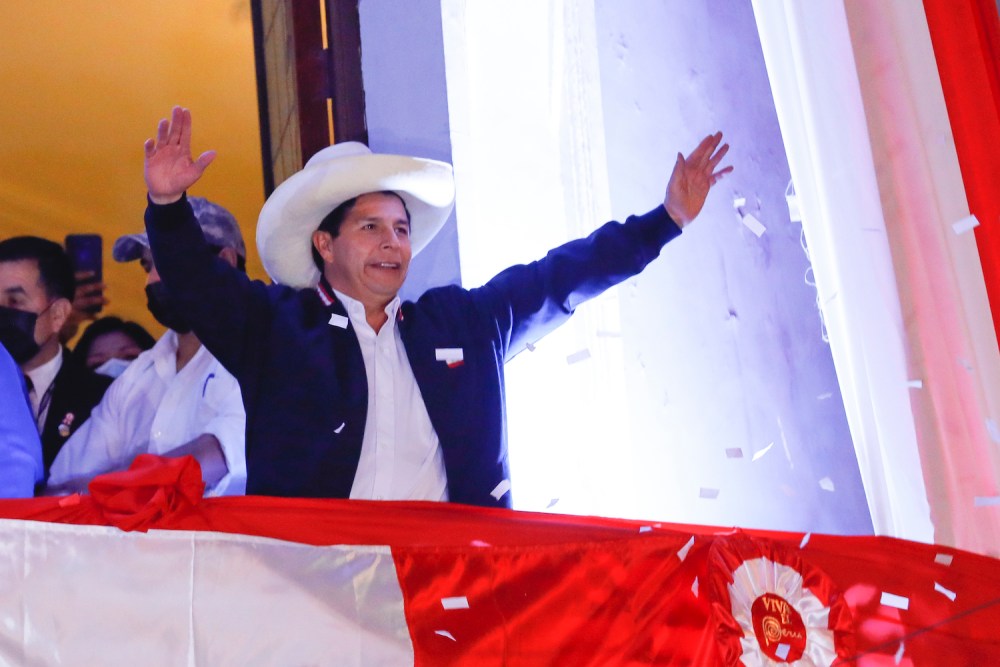 If you would like to receive Morning Brief in your inbox every weekday, please sign up here.

Peru Swears In a New President

If you would like to receive Morning Brief in your inbox every weekday, please sign up here.

Peru Swears In a New President

Peru prepares to inaugurate a new president today—its fourth in less than a year—as it draws a line under a lengthy and acrimonious vote count and elevates Pedro Castillo, a socialist schoolteacher and union organizer, from relative obscurity to its highest office.

It’s fair to say no one saw this coming. Castillo, a member of the Marxist Free Peru party, polled in the single digits heading into April’s first-round elections but emerged the surprising winner with roughly 19 percent of the vote, setting up a runoff with Keiko Fujimori, the daughter of the jailed former dictator Alberto Fujimori.

Driven by a surge of support from the rural poor, Castillo scraped by with a 44,263-vote margin of victory. Castillo’s win was immediately challenged by Fujimori, employing the now familiar—but baseless—accusation of ballot fraud, setting up weeks of legal challenges. Fujimori finally accepted the ruling of Peru’s electoral authorities after exhausting her options, although in the same breath she cast Castillo’s inauguration as “illegitimate,” urging her supporters to “defend the constitution and not let communism destroy it to take power definitively.”

Despite Fujimori’s rhetoric, the constraints on the presidency prevent anything like the Havana regime emerging in Lima. On Monday, a powerful check on Castillo’s power arose, as an opposition alliance won control of Peru’s Congress. María del Carmen Alva, a centrist, was elected president of the body with the backing of Fujimori’s Popular Force party.

Left out. Castillo, perhaps mindful of his lack of institutional support, has sought to reassure his opponents of his ambitions. His eye-catching electoral pledges—summed up in his slogan “No more poor people in a rich country”—have been watered down since the April vote. Where once he had proposed nationalizing prosperous mining and natural gas companies, he now calls for higher taxes on their profits.

As he takes office Wednesday, Castillo will attempt to break the cycle that brought down his predecessors and head off accusations that he is a Peruvian version of the region’s other leftist governments. “I categorically reject the notion that we’re going to bring in models from other countries. We are not chavistas. We are not communists or extremists, much less terrorists,” he told a crowd of supporters last Friday.

COVID-19 problems. His most urgent task lies in addressing Peru’s COVID-19 epidemic, which has led to the highest death rate per capita of any country in the world. Just 13.8 percent of the country has been vaccinated, and the lambda variant, first discovered in Peru, now accounts for 80 percent of cases.

Blinken meets Modi. U.S. Secretary of State Antony Blinken meets with Indian Prime Minister Narendra Modi in New Delhi Wednesday, making him the third major U.S. official to visit the country this year after Defense Secretary Lloyd Austin and climate envoy John Kerry. According to a State Department statement, the visit will focus on a range of issues including “COVID-19 response efforts, Indo-Pacific engagement, shared regional security interests, shared democratic values, and addressing the climate crisis.” Blinken is also scheduled to meet with Indian National Security Advisor Ajit Doval as well as Foreign Minister Subrahmanyam Jaishankar. He will finish his day in Kuwait, where he will meet with senior government officials.

Mexico’s Cuba aid. A shipment of food, oxygen, and medical supplies bound for Cuba is expected to set sail from the Mexican port of Veracruz Wednesday, as President Andrés Manuel López Obrador makes good on his promise to provide humanitarian assistance to the island following protests there this month. The vessel follows in the wake of another ship carrying aid, which left Mexico on Tuesday, and the delivery of 126,000 barrels of diesel fuel from Mexico’s state-run Pemex this week. On Monday, López Obrador called on U.S. President Joe Biden to “make a decision” about the U.S. embargo given that “almost all countries of the world” are against it.

U.S.-Russia talks. U.S. Deputy Secretary of State Wendy Sherman, fresh from trips to China and Oman, leads the U.S. delegation in Geneva at Wednesday’s U.S.-Russia Strategic Stability Dialogue. The resumption of the nuclear arms control talks was one of the concrete outcomes of a June summit between Biden and Russian President Vladimir Putin. Bonnie Jenkins, the undersecretary of state for arms control and international security, joins Sherman following her Senate confirmation last week.

Global growth. The International Monetary Fund cited access to COVID-19 vaccines as the main driver dividing the global economic recovery into “two blocs,” as it launched its World Economic Outlook on Tuesday. The lender kept to its April forecast for global growth of 6 percent but warned such an expansion would be uneven, as developed countries largely outpaced their developing counterparts. IMF Chief Economist Gita Gopinath urged multilateral action “to ensure rapid, worldwide access to vaccines, diagnostics and therapeutics” in order to avoid the mutation and spread of more contagious COVID-19 variants.

Inter-Korean relations. North Korea reopened a cross-border phone line with South Korea on Tuesday, in a sign of a thaw between the two countries. The communications line was deactivated by North Korea last June in retaliation for the dropping of anti-regime leaflets over its border by South Korean activists. North Korean state media called the move a “big stride” for the two countries, while South Korea’s presidency said it would “revive trust.”

The U.S. arts and crafts retail chain Hobby Lobby has once again fallen afoul of U.S. authorities after a federal court ordered it to forfeit a 3,500-year-old tablet featuring text from the Epic of Gilgamesh. The tablet was purchased by Hobby Lobby for $1.67 million from an auction house and was intended as an exhibit at the Museum of the Bible, a venture funded by Hobby Lobby President Steve Green. The court found the artifact had initially been imported illegally, and Hobby Lobby consented to its forfeiture. The Sumerian tablet will eventually be returned to Iraq, its country of origin.