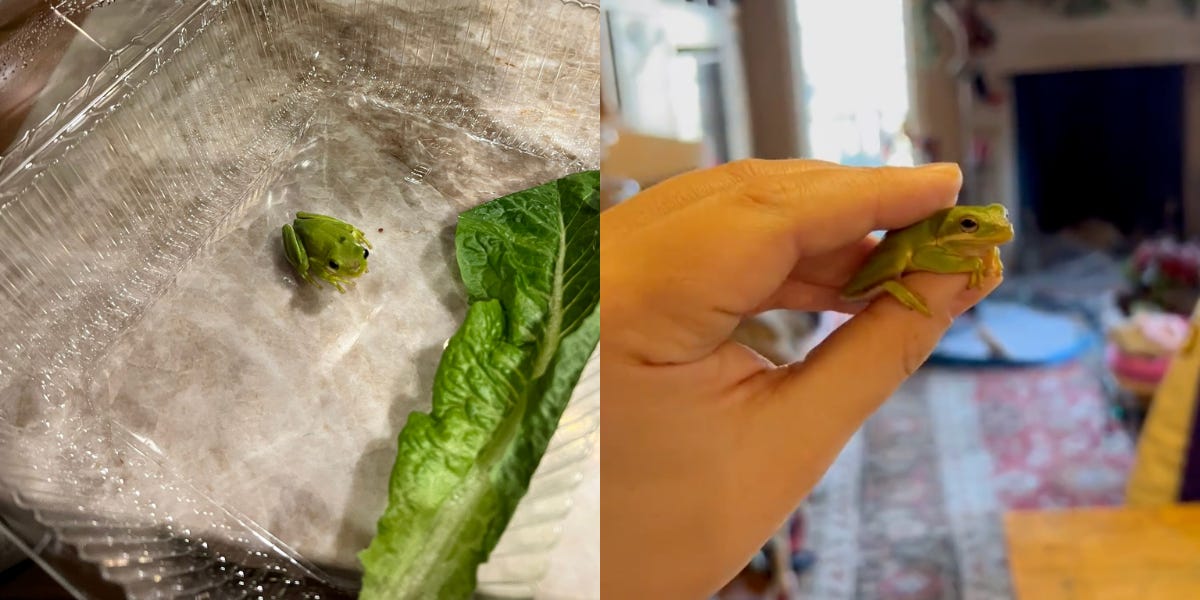 Simon Curtis, a singer, actor, and author, went viral after he tweeted about finding a live frog in a box of lettuce he’d recently purchased.

The 35-year-old Tulsa, Oklahoma, native considered releasing the frog into nature when he first found the creature, but decided it was too cold and the frog likely wouldn’t survive. Instead, Curtis named the frog Tony and asked followers on Twitter for advice on how to take care of his newly adopted pet.

Curtis has chronicled his time with Tony thus far — which began on December 20 when he first opened the box – on Twitter. He told Insider that he purchased the package of romaine lettuce on either December 16 or 17.

In the four days since discovering Tony, Curtis has set the frog up with a habitable living space, fed Tony wax worms, and spoken with several experts about the best course of action to take.

“I’ve consulted with several biologists, and just ten minutes ago, with a frog specialist at National Geographic, who is encouraging me to keep him as not to potentially bring diseases or new genetic discrepancies to the ecosystem here,” he told Insider.

He said that Petco has contacted him “wanting to purchase [Tony] a terrarium if I keep him, but I’d prefer the money go to a conservation group.” For now, Tony is living in this “temporary house,” but Curtis said that he’d upgrade it if he ultimately decides to keep the frog.

“Oh yes,” he told Insider, “if I keep him he will be getting a proper terrarium, tall enough for a tree frog, with humidity and temperature control, plenty of climbing and hiding space, and everything he needs for long term health and happiness!

“To be perfectly honest, I’m actually glad to find something living in the produce I eat,” Curtis said. “I take it as a sign that the brand is being honest about not using toxic pesticides and is actually selling real vegetables.”

For now, Curtis says he is leaning toward keeping Tony as a house pet, though he hasn’t made a final decision yet.

“I just found photos of my time as a child with leukemia and realized my favorite stuffed animal/hospital buddy at the time was a tree frog,” he told Insider.