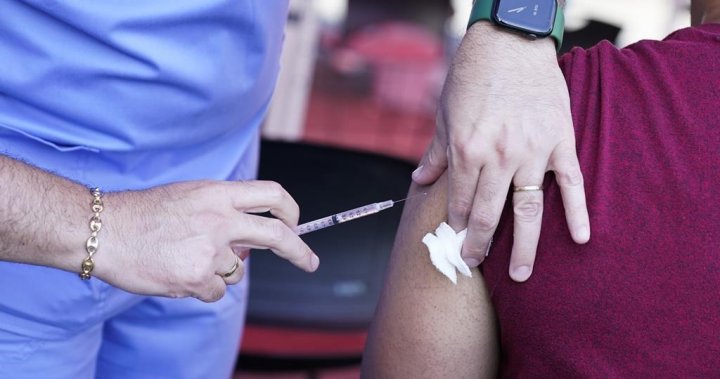 The recent inaccessibility to the monkeypox vaccine has those in the LGBTQ2+ community, and those who advocate for equitable access to health care, worried.

Monkeypox is a viral infectious disease related to smallpox, from which most people recover on their own after a few weeks, but people can become very sick and could die in some circumstances, according to Public Health.

In many provinces, vaccines are only being provided to close contacts of confirmed cases. Monkeypox, so far, has disproportionately impacted men who have sex with men, but Public Health clearly states that anyone can contract the virus.

For Shane Pope, it shines a greater light on the continued inaccessibility to health-care for the LGBTQ2+ community.

He was shocked to discover the limited quantity of vaccines supplied to Nova Scotia and New Brunswick – roughly 340 in total.

“This further increases those inequalities in access to health care,” Pope said. “We know this kind of thing is eerily similar to the early days of the HIV/AIDS epidemic and you know we ignored concerns, we ignored issues and we didn’t address them head-on as a public health issue. I think that’s what we’re failing at currently.”

Pope said this is just another barrier that those who seek health-care as a member of the LGBTQ2+ community face on a regular basis.

He said prEP is a good example of those barriers.

The drug is a proactive prophylactic that prevents contracting HIV. According to Pope, it isn’t covered by all insurance companies, is prohibitively expensive and many physicians are unwilling to prescribe it.

“It’s not as easy as we would hope. prEP has been around for a decade and it is effective at preventing HIV. We promote it, and we encourage folks to get on prEP, but it is not easy to access.”

He said the government and health-care systems haven’t quite caught up to the benefits of preventative measures like prEP.

“We know prevention works,” he said. “It’s unfortunate that this is a barrier to access adequate health care.”

For Pope, the same logic about prevention and proactiveness applies to the monkeypox vaccine.

“People want the vaccine. They’re aware that it is their best chance of not getting monkeypox.”

“So, people want it and there is a need for it. I think we should be designing and developing plans, equity-based plans, across the board that including our marginalized and vulnerable populations.”

Monkeypox cases in Canada surpass 1K, with most in Ontario

Mike Minard, who has been unable to access a monkeypox vaccine in New Brunswick but falls in the category most at risk, said it is frustrating to see the barriers continue.

“You can contract this virus in multiple different ways,” he said. “It doesn’t necessarily mean you’re being promiscuous and out with a lot of partners. You can contract from regular close physical contact.”

He and his partner are considering travelling to Montreal to get the vaccine, where it is widely available, something Pope confirmed was happening in Nova Scotia as well.

2:01
Montreal Public Health is calling on at-risk groups to get vaccinated against Monkeypox in advance of the return of Pride festivities

Montreal Public Health is calling on at-risk groups to get vaccinated against Monkeypox in advance of the return of Pride festivities – Jul 28, 2022

“There is a significant barrier to entry for people in the province,” he said. “Whether that’s because they’re at a higher risk for one reason or another – it can be anything from unprotected sex to drug use, to any number of other things. Regardless of the reason, people need to have access to that type of health care.”

In New Brunswick, one of the primary clinics that provides health-care to the LGBTQ2+ community was forced to close due to the fact the provincial government has refused to fund out-of-hospital abortions.

However, the government started a 25-month program called Building Capacity for Sustainable Trans Health Care in N.B. back in March. It is funded through the Women and Gender Equality Canada and through Fredericton-based LGBTQ+ advocacy group Imprint Youth Association.

As for the monkeypox vaccine, Newfoundland and Labrador has expanded eligibility for the vaccine to two-spirit, transgender and non-transgender males who identify as LGBT.

No such change has been made to the eligibility of the monkeypox vaccine in New Brunswick or Nova Scotia yet.

Dr. Theresa Tam, Canada’s top doctor, said she thinks the knowledge about the monkeypox is getting out, but “we can always do more,” she said, of the rollout of the vaccine in the provinces.

“That’s why the federal government is supporting the community groups,” she said. “We can always improve. I do think there is fair enthusiasm to get the vaccine, so that’s good. So the key question is whether we would have enough pre-exposure prophylaxis for this high risk and we do have the supplies but we need to be good stewards of that supply.”

She said there are many factors in being “good stewards of the supply” including the fact people will need two doses, and experimental things like in the U.S. where fractal doses are being provided.

There have been no updates on the first confirmed case of monkeypox in New Brunswick, which was reported on Aug. 12, and no subsequent cases have been announced.

As of Friday, there were at least 1,168 cases of monkeypox in Canada.

Stigma over monkeypox poses challenges in tracking Canadian cases – May 26, 2022