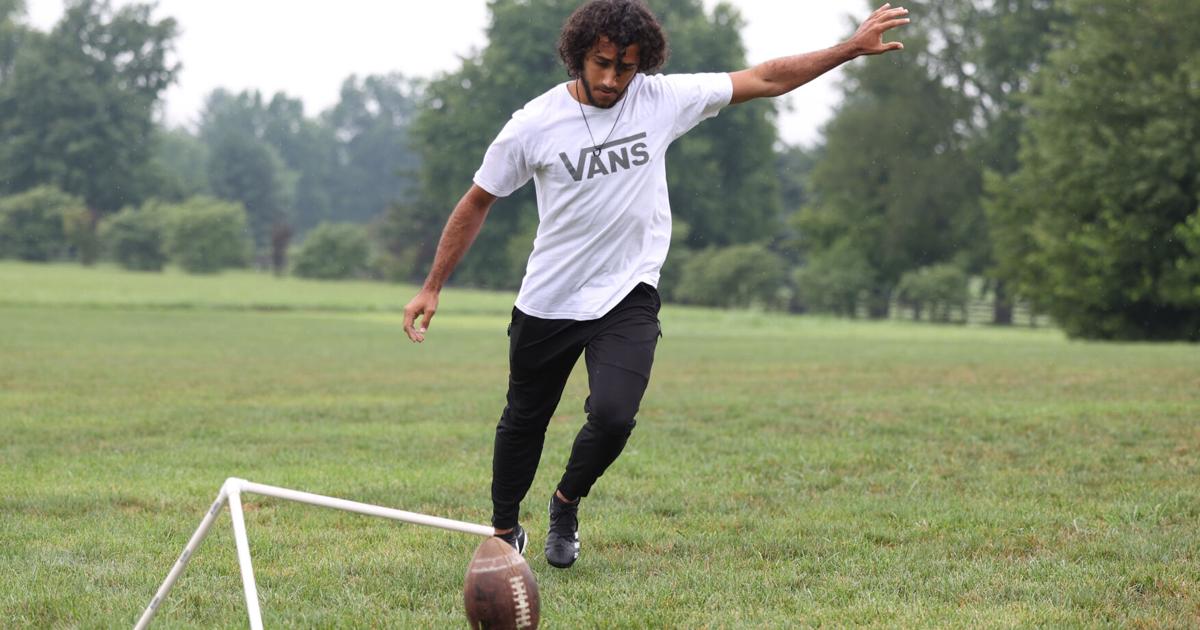 LOUISVILLE, Ky. (WDRB) — For two years, Khaled Al Asad practiced kicking to become a college football player. The 19-year-old was a student at the University of Louisville trying to find his way on a Division I roster despite just a season of high school football experience under his belt.

Committing to a dream with no guarantees, Al Asad worked tirelessly on his own to become a college-level kicker. That dream finally came true when Missouri State University offered him a roster spot in mid-July.

“It’s an individual position. It’s such a lonely thing to do,” he said. “Sometimes, you almost lose your mind because you do the exact same thing every single day with the same result, and not the same result kicking-wise but the same result of where you’re at the next day. It’s just one of those things where you have to trust, one day, something will change. That finally happened for me.”

At the age of 11, Al Asad moved more than 6,000 miles from Jordan in the Middle East to the United States. He had to learn a new language and adjust to a new culture.

While he had grown up playing soccer, a new sport piqued his interest in high school. Al Asad started kicking footballs for fun to see how it compared to soccer.

When Al Asad was a junior being honored as a member of Oldham County High School’s fall homecoming court, he introduced himself to football head coach Michael Fox and said, “don’t worry Coach, I’m going to be your kicker next year.”

Al Asad joined the football team for his senior year. He made 38 of 43 extra-point attempts during the season and also hit a 33-yard game-winning field goal against Shelby County.

After graduating from Oldham County in 2020, Al Asad wanted to continue his career.

“One of my biggest fears was to never play football again, just because of how obsessed I got with the game, how much I started loving the game,” Al Asad said. “All the hours I spent on the field, every single day.”

With a full-ride academic scholarship to U of L, Al Asad opted to stay local and pursue a walk-on spot with the Cardinals. Due to the COVID-19 pandemic, Louisville didn’t have open tryouts where Al Asad could show off his kicking skills, but he continued to work.

In hopes of gaining the attention of Louisville football coaches and sharpening his abilities, Al Asad worked on kicking daily. But without a team, Al Asad didn’t have a field he could call home.

“The first year was just a straight grind just going to school, trying to find a field to kick at because I didn’t want to get in the way of practices,” Al Asad said.

He kicked wherever he could find a goal post, at Oldham County and South Oldham high schools, practice fields and parks. Al Asad stayed around the game, serving as an assistant coach at Oldham County for two seasons.

Al Asad credits Sean Ralls, who punted at Eastern Kentucky University and the University at Albany, as a teacher in his development.

Like Al Asad, Ralls was a former soccer player. The 2019 Oldham County High School graduate worked with Al Asad to break some of the bad habits developed from playing soccer that doesn’t translate to place kicking.

Ralls said Al Asad was determined to be a kicker collegiately from the day he started. Although the improvement was gradual, Al Asad’s skills continued to rise.

“I’ve trained with a lot of kids. I’ve worked at different national showcases, trained high school kids that have gone on to play Power Five, but I don’t know if I’ve ever met somebody with the work ethic of his,” Ralls said. “If you would have seen him now compared to where we were when I first met him, it’s like night and day, it’s crazy.”

With college schoolwork and other responsibilities, Al Asad’s commitment to his dream persisted, despite the chance it might never come to fruition. In the past two years, the longest break he’s afforded himself has just been a few days at a time.

Fox, now the defensive coordinator at Trinity High School, introduced Al Asad to a former NFL kicker with a local connection. Jon Hilbert, who played at U of L, kicked for several NFL teams including the Dallas Cowboys and Carolina Panthers.

“I said, ‘Just work with him. He’s never been coached as a kicker,'” Fox said. “Everything is self-taught.”

Just a few weeks later, Hilbert returned to Fox saying Al Asad could kick at the Division I level.

“That work ethic is going to be what sets him apart,” Fox said. “That tenaciousness is what’s going to continue to elevate him. That’s a testament to his character.”

Awaiting an opportunity to kick for a college team, Al Asad decided to begin the transfer process from U of L in early July. Al Asad posted videos of himself kicking on social media, and Hilbert spoke on behalf of Al Asad to college coaches.

While Al Asad admitted there were times he felt like playing college football wouldn’t ever happen, he never stopped believing.

“I just put the work in and time does its own thing,” Al Asad said. “At that time, I thought that’s as good as it could get. And then two or three weeks later, I would do something even better, I get more accurate or have a bigger leg.”