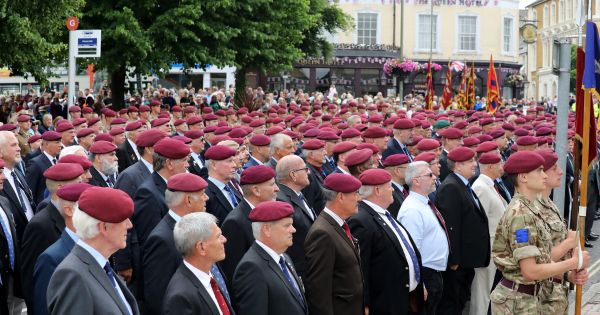 The sacrifices and successes of those who took part in Operation Corporate, the Liberation of the Falkland Islands from the Argentine military forty years ago, were both commemorated and celebrated in the ‘Home of the British Army’, Aldershot.

Forty years since General Mario Menendez surrendered command of the Falkland Islands to Major General Jeremy Moore, the 42 members of the Parachute Regiment and attached personnel who gave their lives were commemorated in a service of remembrance held at the Falkland Islands plot in the Aldershot Military Cemetery.

Eighteen Airborne soldiers are laid to rest there, among them Private Jason Burt killed at the age of seventeen on Mount Longdon and Sergeant Ian McKay killed whilst storming enemy positions for which he received a posthumous Victoria Cross.

The service was conducted by Rev. David Cooper who served as the Padre with 2nd Battalion The Parachute Regiment throughout the conflict, later he would become the first military padre to conduct a field burial since the Second World War.

Reflecting on those tumultuous 74 days all those years ago David said, “I was part of their team and we supported each other throughout the campaign, but in different ways obviously. Nonetheless, it was strong mutual support that, in truth, made us a very good team.” Speaking of the 40th anniversary he added, “Reunions like this do mean that I meet up, in some cases, with individuals I haven’t seen for forty years so it has that aspect of meeting old colleagues who have now become old friends.”

The regimental colors of both the 2nd and 3rd Battalions of the Parachute Regiment were draped across the drums to form an altar for the service and the numerous Airborne Association Standards marched on behind the eighteen headstones to provide a colorful backdrop.

A congregation of more than five hundred packed the cemetery all there to pay their respects. During the service the last post was played and a piped lament rang out across the cemetery played from the top of the hill by former Aldershot Garrison Sergeant Major, J J Ferry. In a moving tribute, members of the local Military Preparation College (youngsters who are priming themselves to join the military) stepped forward to place a rose on each of the eighteen graves.

The afternoon reflected a change in tone as the day turned to celebration of the hard fought victory and the Liberation of the Falkland Islanders from the Argentine Junta’s invasion and occupation.

The public turned out in their thousands to join the families and friends of the veterans in cheering on the grand parade through the ‘Home of the British Army’.

Led by ‘Pegasus’, the Regimental Shetland pony mascot and the British Army Band Colchester, the parade of some 250 plus veterans stepped off to march a circuit around the centre of Aldershot passing the Princes Hall saluting dais. There to take the salute was, Major General (Retired) Julian Thompson, who as a Brigadier in 1982 commanded 3 Commando Brigade and tasked with the retaking of the islands.

Both 2nd & 3rd Parachute Battalions along, with their Airborne support arms, were assigned to 3 Commando Brigade; the result was a fearsome combination of the famous green berets of the Royal Marines and the maroon of the Paras. At a distance of 8000 miles this was to be the longest ever amphibious operation in history.

A fiercely proud Maj Gen (Retd.) Julian Thompson said, “I felt totally confident in my green and red bereted marines and soldiers I knew we’d beat them. Once we were ashore I knew we would win and I told them so – all of them. I said to them this will not be a picnic, but with your expertise and courage we will win.”

On completing the march through the garrison town, the parade came to halt in front of the saluting dais, a sea of maroon berets stretching out before the thousands of spectators. Maj Gen (Retired) Julian Thompson praised them all for the magnificent turn out and admired their ‘tab’ around town before giving permission for the parade to be dismissed. The veterans retired to the ‘Airborne Village’ that had been set up for them in the Princes Gardens, no doubt to reflect and reminisce on what went on 40 years ago at Mount Longdon, Goose Green and Wireless Ridge. (British Army)