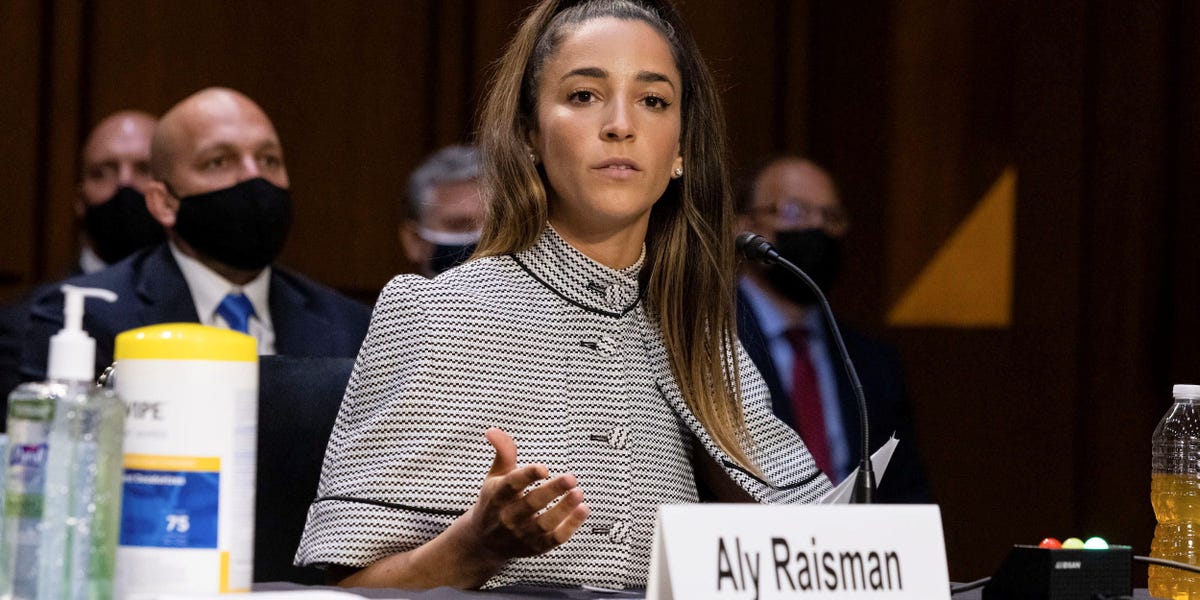 Aly Raisman has become a voice for the voiceless now that her illustrious gymnastics career has come to an end.

The six-time Olympic medalist and two-time captain of the United States women’s gymnastics team has spent much of the past several years speaking up for others and speaking truth to power. And though she does so with a grace and self-assuredness that belies her age, the 27-year-old is still growing into her role as an advocate.

She’s starting by learning to speak for herself.

“I have a puppy, Milo, and if there’s anything even slightly off with him, I want to take him to the vet and make sure that I am caring for him and taking care of him,” Raisman told Insider. “And I realized, why am I not doing the same thing for myself? We often will go out of our way to help other people. And we advocate for other people to go to the doctor, but we don’t always do the same thing for ourselves.”

“So I’ve just learned the importance of really validating how we feel and being there for ourselves the way that we would care for someone else,” she added.

Raisman has famously led the charge in speaking out against USA Gymnastics and the USOC for their failures in handling sexual abuse allegations against former team doctor Larry Nassar. More recently, she and fellow gymnasts Simone Biles, McKayla Maroney, and Maggie Nichols — all of whom were among the hundreds of young athletes who survived Nassar’s molestation — testified at a Senate Judiciary hearing on the FBI’s “dereliction of duty” in the case.

But sexual abuse isn’t the only area where Raisman finds herself speaking out. She’s vocal about plenty of causes — mental health care, pet adoption, and body positivity, to name a few. And as someone who has suffered from migraines “for a very, very long time,” Raisman has begun publicly discussing her long journey to receiving a diagnosis and treatment to empower others to seek medical care, too.

“A lot of people that have migraines are actually untreated,” Raisman said while discussing her partnership with UBRELVY, a medication used to treat migraine attacks. “I think it’s because there’s not a lot of understanding or conversation around what migraine symptoms are.”

“What I’ve learned over the last few years is that, really, knowledge is power, and having the tools to be able to understand what I’m feeling has been really helpful in helping me actually express what I’m feeling to a doctor,” she added. “… I honestly wish that I had these answers a long time ago.”

Though migraine trouble runs in her family — her mom, Lynn Faber, struggled with the debilitating condition for as long as the retired gymnast can remember — Raisman spent much of her young life attempting to power through the pain and nausea that migraines bring.

Despite experiencing headaches that were so severe that she “couldn’t even touch” the back of her scalp and dry heaving during training sessions, Raisman would assume that it was just a standard, run-of-the-mill tension headache and convince herself to suck it up.

“As an athlete, I was kind of taught just to push through and not really reflect on how I was feeling,” Raisman said. “And it wasn’t really taught in gymnastics world to advocate for yourself and go to a doctor, ask questions, and get answers.”

It wasn’t until recently that she “learned the importance of just trusting my own gut and being okay with speaking up.” At a recent speaking engagement on a college campus, Raisman found herself addressing a crowd with blinding lights beaming down at her on stage.

The brightness, she’s learned, was sure to trigger a migraine. And while even just a year ago Raisman may have felt too “self-conscious to speak up and interrupt while I was speaking,” this time “within a minute, I interrupted my own speaking and asked them to dim the lights and explained that I was gonna get a migraine if I kept speaking through this.”

“I’ve certainly been in situations where I’ve been around other people where I do have a really bad migraine attack, and not only am I feeling really sick and really bad for the migraine, but then I also feel very self-conscious and almost worry that people going to understand, because you can’t see a migraine,” Raisman said. “I’ve worried ‘Are people going to think I’m being difficult? Are they going to think I’m being dramatic that I don’t want the bright lights?'”

“I worry a lot about that,” she added. “But I’ve just learned it’s so important to be our own advocates, and we have to treat ourselves the way we would treat a loved one or a friend.”

But Raisman doesn’t just do it for her own benefit. She hopes that leading by example will inspire others to prioritize self-care and treat themselves with kindness, too.

“When people are sharing what they’re experiencing and going through, even if it helps one person out there, I think it’s so powerful and so important,” Raisman said. “So I would say to give yourself the same care and compassion that you would give to somebody else.”

“It can be really easy to not take time for ourselves, but it’s really important to give ourselves the attention that we need.”