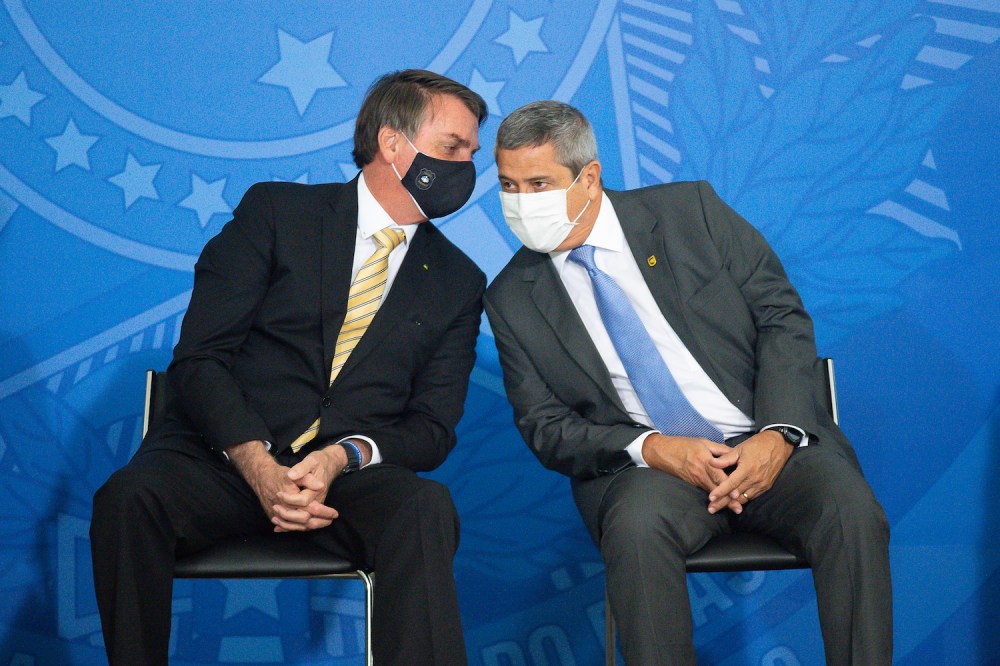 The highlights this week: Bolsonaro and his military ministers size up their options for holding on to power, what we know about Pedro Castillo’s finally official presidency, and the reach of NSO’s Pegasus software in Latin America.

If you would like to receive Latin America Brief in your inbox every Friday, please sign up here.

The Odds of a Coup in Brazil

For the vast majority of Brazilian President Jair Bolsonaro’s time in office, his approval rating—the number of Brazilians who rank his government as “good or great”—has wavered between 30 and 37 percent, according to pollster Datafolha. That was the case even as recently as March, when a brutal second wave of the coronavirus hit Brazil amid a slow vaccine rollout. Bolsonaro’s support appears to have been buoyed by significant financial aid payments to poor Brazilians and his insistence that spurning physical distancing is good for the economy.

But that support fell to 24 percent in May, and this month, a record 51 percent of Brazilians ranked Bolsonaro’s government “bad or terrible.” Pandemic aid was reduced as unemployment rose to a record 14.7 percent, and a televised Senate probe into pandemic mismanagement has implicated several senior officials. Bolsonaro’s main opponent, former President Luiz Inácio Lula da Silva, would easily win a presidential election if it were held today.

As his popularity plummeted, Bolsonaro repeatedly questioned the reliability of Brazil’s electronic voting machines and threatened to cancel next year’s presidential election entirely. An enthusiast of former U.S. President Donald Trump’s playbook, Bolsonaro appears to be laying the groundwork to challenge the election results should he dislike them. Peru’s Keiko Fujimori did the same between the country’s June 6 presidential runoff and her concession on July 19.

When push came to shove in Peru’s and the United States’ recent election impasses, military commanders did not support losing candidates’ baseless claims of fraud. But that is less of a guarantee in Brazil, where under Bolsonaro the country’s armed forces are enjoying a level of political power unprecedented since the country’s 1964-1985 dictatorship.

The “military party.” At least 6,157 people with military backgrounds hold civilian positions in Bolsonaro’s administration, more than double the number under his predecessor Michel Temer, according to data from government records compiled by the political scientist William Nozaki.

In addition, 14 generals who served together in the army’s top command in 2016—and who trained together at the same military academy in the 1970s, during the dictatorship’s most repressive period—have served or are serving among the government’s most senior ranks. Army Reserve Col. Marcelo Pimentel Jorge de Souza writes in Folha de São Paulo that the group forms an “informal, cohesive” nucleus that “advises and manages the government, the president, and the narratives about their political roles.”

Under the Bolsonaro administration, military wages were the only government salaries to rise in the 2021 budget, and military members’ pensions remained largely untouched by a broad pension reform in 2019. The armed forces have also been handed control of massive projects such as policing deforestation in the Amazon. This power dynamic has led several analysts—and even Brazil’s former speaker of the house—to refer to Bolsonaro’s government style as “right-wing Chavism,” in a reference to the late Venezuelan ruler Hugo Chávez.

While many viewed the Brazilian military as incorruptible when Bolsonaro was elected, that image has faded as military figures inside the government became entangled in bribery accusations involving COVID-19 vaccine contracts in the ongoing Senate probe.

In recent days, the defense minister reportedly echoed Bolsonaro’s warning against honoring the results of electronic voting machines in the 2022 elections and, together with the joint command of the armed forces, issued an official statement threatening those who criticize the military. They are the latest signals that at least some within the military’s ranks could support Bolsonaro in an effort to block a transfer of power next year.

The odds of a coup. While Bolsonaro has alluded to his desire to carry out a self-coup throughout his presidency (such as by closing the Supreme Court, blocking an election, or refusing to accept its results), several factors would work against him.

In the lead-up to Brazil’s 1964 coup, many in Brazil’s Congress, state governments, business community, and Catholic Church supported the president’s ouster, which also had the blessing of the United States. But now, a significant number of congresspeople and state governors would likely be opposed to a coup, as would the United States and other members of the international community.

To succeed today, a coup would likely need to be more violent, the sociologist Celso Rocha de Barros told the journalist Renata Lo Prete. Bolsonaro could enlist supporters in the country’s police forces and lower military ranks, as well as followers who have procured weapons under his relaxed gun control laws. (The number of guns held by Brazilian civilians has doubled since 2017.)

The fact that Brazilians are even discussing these scenarios shows how fragile the country’s democracy is—and that, even if Bolsonaro leaves office without a fuss, the effects of his presidency will linger afterward. Top military figures may be able to make their influence in government outlast Bolsonaro.

Pimentel writes that, just as Brazil’s military has become more politicized, its society and politics have become more militarized—a process that takes time to walk back.

Across the region. Militaries in many other Latin American countries have also taken on new spheres of responsibility during the pandemic, including by carrying out medical missions in Argentina, detaining people for breaking quarantines in El Salvador, and taking control over ports and highways in Mexico. The budget for Mexico’s National Guard, which the president has pledged to put under military control, more than doubled from 2019 to 2020.

These shifts have concerned scholars and human rights activists, who note that soldiers are often not trained to serve in such diverse roles and are quick to use force. They are also more difficult to hold responsible for wrongdoing.

Pegasus in Latin America. In this week’s media investigations into the reach of Pegasus spyware, Mexico was the country with the most phone numbers of purported targets listed. The Guardian reports that Mexico was the first country to buy the software from the Israeli manufacturer NSO in 2011 and “became something of a laboratory for the spy technology.” The use of Pegasus against several Mexican journalists and human rights defenders had been previously reported in 2017 and led to a government probe that has since stalled.

The new findings say at least 50 people linked to current Mexican President Andrés Manuel López Obrador, who was a leading figure in the opposition to 2012-2018 President Enrique Peña Nieto, appeared on the list of those allegedly surveilled. They joined politicians from every one of Mexico’s political parties, as well as lawyers, activists, diplomats, and journalists—including Cecilio Pineda Birto, who was assassinated shortly after his number appeared on an NSO list in 2017.

The Guardian’s Nina Lakhani notes that the Mexican government’s war on drugs has coincided with a major surveillance boom in the country, but despite those capabilities, homicide numbers have remained extremely high.

In Brazil, the news site UOL reported in May that Rio de Janeiro City Councilman Carlos Bolsonaro, the president’s son, tried to negotiate the purchase of NSO spyware for the Brazilian government but met pushback from the top command over concerns about where the program’s data would be stored.

Other candidates still may enter the race ahead of the November elections, but historically high primary vote counts for both Boric (1 million) and Sichel (659,000) bode well for their chances. 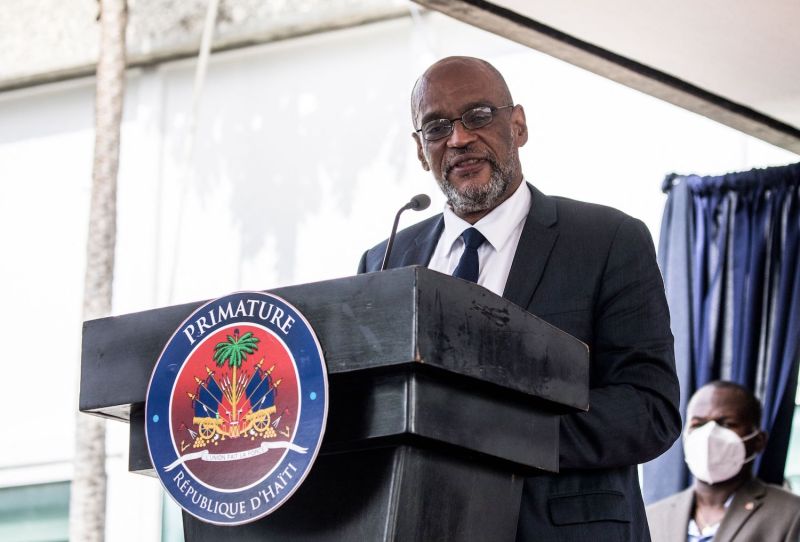 Power transition in Haiti. Acting Haitian leader Claude Joseph handed power to former interior Ariel Henry on Tuesday, with the blessing of a group of international diplomats known as the Core Group. Former President Jovenel Moïse had announced Henry’s appointment shortly before he was assassinated on July 7, but Henry had not yet taken office at the time of the killing.

Though the transition resolved one impasse, some in Haitian civil society criticized Henry’s installation—saying he represents the continuation of foreign support for Moïse’s party, which had been ruling by decree. Henry said he would work toward the realization of elections.

Landfall, filmed after Hurricane Maria amid Puerto Rico’s 2019 political uprising, and Stateless, about the aftermath of a 2013 Dominican court ruling that stripped citizenship of Dominicans of Haitian descent, “exist in a documentary landscape that tends to default toward hope” but disrupt its formula, portraying the contradictions and pain of local political movements.

In Tokyo on Wednesday, a Brazilian woman became the first soccer player—of any gender—to score a goal in five consecutive Olympic Games. What is her name?

In Focus: Peru’s Castillo Is Official

Peruvian President-elect Pedro Castillo waves at supporters after being confirmed as the winner of Peru’s June 6 presidential runoff election at his campaign headquarters in Lima on July 19.Ricardo Moreira/Getty Images

Just in time for next week’s presidential inauguration in Peru, election authorities declared they were finished investigating Keiko Fujimori’s claims of fraud, and they named leftist former union leader Pedro Castillo as the rightful victor of the country’s June 6 runoff election.

While many questions remain about Castillo’s policy plans—he avoided press during the weekslong election standoff—it is uncertain how successful he might be at implementing his agenda.

The governability question. Castillo’s first objective is not to get impeached, the political scientist Martín Tanaka writes for El Comércio. His party, Free Peru, holds 37 of the 130 seats in Peru’s unicameral legislature, and it takes 87 votes to impeach a president for “moral incapacity,” which has happened three times in the past 21 years.

Fujimori has vowed to battle Castillo’s agenda, and her campaigning was an important factor in successful efforts to bring down presidents such as Pedro Pablo Kuczynski and Martín Vizcarra in recent years.

While, as of Thursday afternoon, Castillo had not announced a position for Francke in his government, Francke has represented Castillo in press interviews. He told the BBC that a Castillo administration would accept the free functioning of enterprise but aim for more wealth distribution, especially through greater taxes on mining corporations and tax evaders.

Castillo’s close political ally Verónika Mendoza, whose support for him was decisive in the election, tweeted this week calling for a new constitution to be written for Peru. Castillo supported the proposal during the campaign, and it is sure to be contentious as he takes office.

And the answer is…

Marta Vieira da Silva, 35, hails from the northeastern Brazilian state of Alagoas and plays for Orlando Pride as well as the Brazilian national team. Commonly referred to simply as Marta, she is widely considered the best female soccer player of all time. She has been named FIFA’s best player in the world six times—a record only matched by Argentina’s Lionel Messi. Her goal Wednesday was against China, and earned kudos from Pelé, who wrote that she “symbolizes the hope of a better world, in which women conquer much more space.”