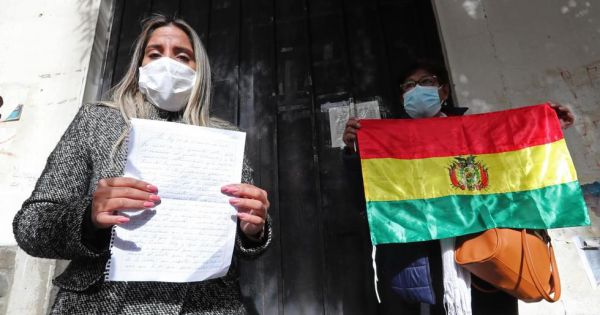 I beg you to intercede before the Bolivian Government to guarantee a healthy life for Áñez, free of physical and psychological torture, Ribera wrote in a letter to the former two-time President of Chile.

Ribera also said her mother was isolated from all necessary care for her delicate health, considering that her underlying illness is compounded by the unjust 282-day confinement, the constant psychological aggression to demolish her emotionally.

Áñez, who has spent over 9 months in preventive detention, has suffered from various health problems such as a hypertension and an apparent suicide attempt. Her daughter even spoke of in her letter of State terrorism … typical of totalitarianism, coming from the Ministry of Government, the Prosecutor’s Office, the Ministry of Justice, the Attorney General’s Office and other

departments, that find an echo in judges who respond to political pressure rather than to the application of Justice. Last week Áñez claimed she was a victim of psychological torture after

an incident with the director of the prison where she is being held.

Ribera also pointed out that her mother no longer wanted to defend herlsef at a hearing last Monday, during which her legal team filed for the cessation of preventive detention, because she feels her physical strength is lacking and that she would rather die. Áñez’s request for freedom was turned down due to flight risk and probable obstruction of justice.

Ribera also invited Bachelet to see for herself the conditions under which Áñez is being held. Bachelet is currently in Chile, where she voted last Sunday for the presidential winning candidate Gabriel Boric, as per her own admission.

Ribera also warned that Jeanine Áñez has been confined for a month with the excuse of COVID. The Miraflores prison is the only one in the country that maintains this measure.

They hold an innocent and lonely woman as a political prisoner, she went on.