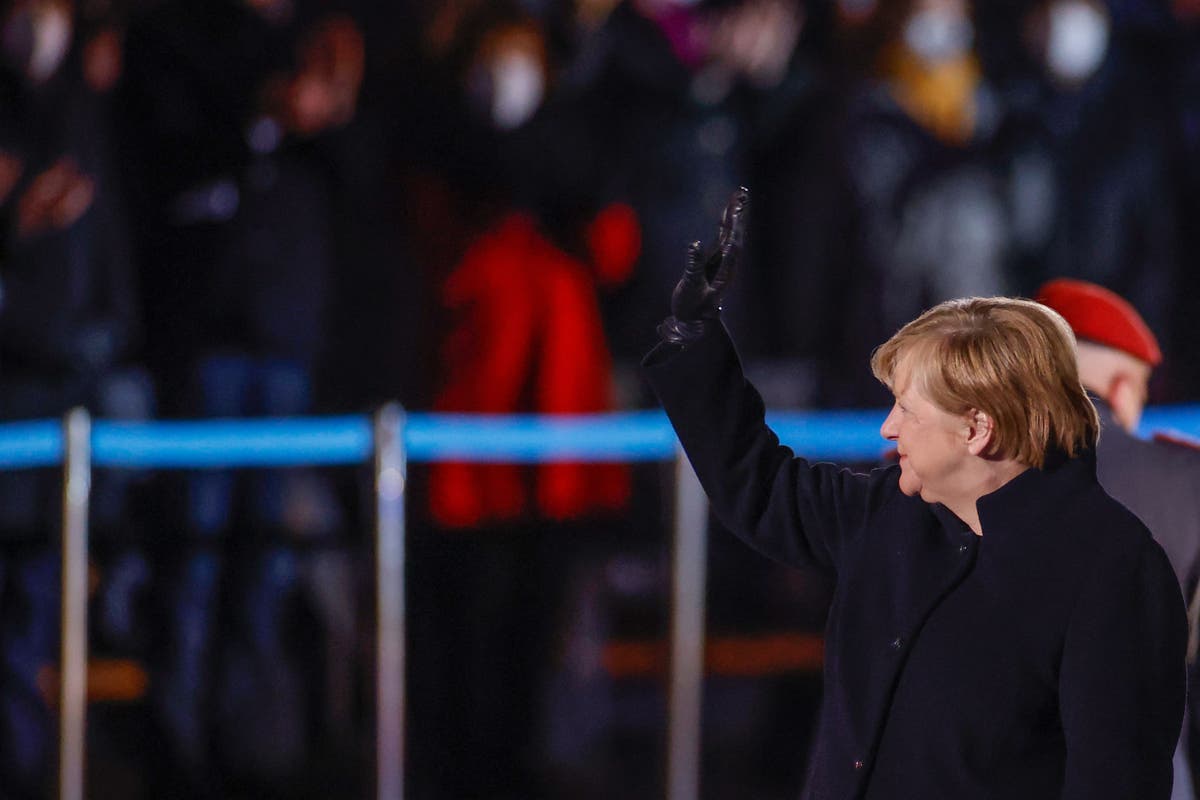 Angela Merkel has urged Germans to shun hatred ahead of her farewell speech at the Grand Tattoo marking an end to her 16-years in office.

The ceremonial send-off for her in Berlin on Thursday was populated by Germany’s political elite, except for the far-right Alternative for Germany, who were not included on the guest list.

Mrs Merkel remains caretaker chancellor until her successor, the Social Democrat Olaf Scholz, is sworn in next week.

She said in a speech in advance of the ceremony: “Our democracy also lives from the fact that wherever hatred and violence are seen as a legitimate means of pursuing one’s interests, our tolerance as democrats has to find its limit.”

The outgoing chancellor was celebrated with a traditional military musical performance and parade held at the defence ministry.

Such an event would normally be held in a more public setting, but Covid restrictions meant celebrations were kept to a more suitable setting.

A brass band honoured Mrs Merkel in playing three songs of her choice.

The first, a piece called ‘You Forgot the Colour Film’, is by east Germany-born punk singer Nina Hagen.

The lyrics lament a young woman’s boyfriend’s failure to take colour pictures of their beach holiday.

Similar to Angel Merkel, Nina Hagen grew up in East Germany, but emigrated to the West in 1976 after clashing with the communist country’s authorities.

Mrs Merkel explained that the song was “a highlight of my youth, which is known to have taken place in the GDR (the German Democratic Republic).”

“By chance, (the song) is also set in a region that was in my former constituency” on the Baltic Sea, she added.

“As such, it all fits together.”

A popular tune by German singer Hildegard Knef, called ‘It Shall Rain Red Roses’ For Me was her second choice, followed by the Christian hymn ‘Holy God, We Praise Thy Name’

The final piece chosen by the daughter of a Protestant pastor was an 18th century Christian hymn Holy God, We Praise Thy Name.

Mrs Merkel then went on to wish Mr Scholz and his government “all the best, good luck and much success.”

She continued by urging her audience to “always see the world through the eyes of others too” and to work “with joy in your hearts”.

Before Thursday evening’s ceremony, she met other federal and state leaders to agree on new measures to curb coronavirus infections in Germany.