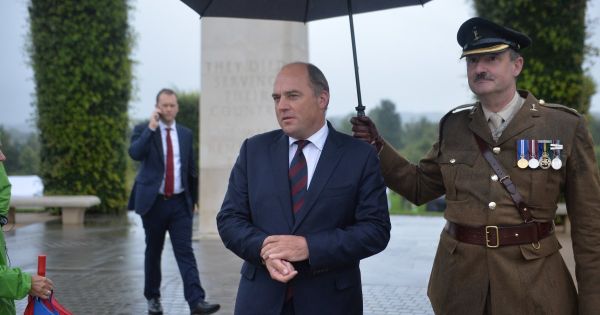 The Argentine foreign ministry reacted strongly to Defense Secretary Ben Wallace’s statements published on Monday in the Daily Telegraph arguing that his belligerent threats and denigratory remarks towards Argentina are not compatible with the current level of diplomatic relations.

Argentine democratic governments have consolidated their sovereignty claim on the Malvinas question in the framework of international law, and through pacific and diplomatic means, and thus Secretary Wallace’s references are absolutely inappropriate and unacceptable

Argentina reiterates the UK must comply with the multiple UN resolutions calling for a negotiated solution of the sovereignty dispute over the Malvinas, South Georgia, South Sandwich Islands and their corresponding maritime spaces.

Argentina also again calls on the UK to respect international law which have declared the South Atlantic as a zone of peace and free of nuclear arms, and the demilitarization of the Malvinas.

This year is the fortieth anniversary of UN General Assembly Resolution 37/9, from 4 November 1982, months after the ending of the South Atlantic conflict , which did not modify the nature of the sovereignty dispute as established in the resolution.

Malvinas Islands question, and request UN Secretary General to undertake a renewed good offices so as to attend the parties involved.