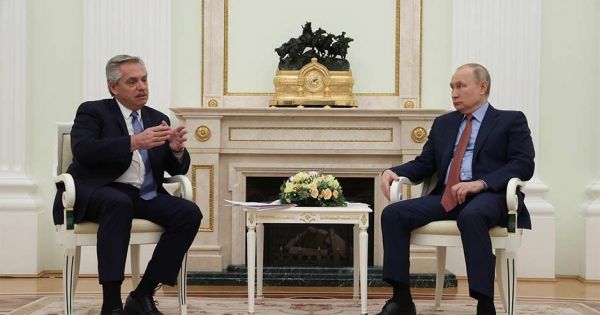 President Alberto Fernández Thursday told his Russian counterpart Vladimir Putin in Moscow that Argentina has to stop having such a great dependency on the IMF and the United States.

Fernández made those remarks as rivalry between Putin and US President Joseph Biden is on the rise over the Ukraine crisis and also after the Democratic leader put in a word so that an understanding could be reached between the South American country and the International Monetary Fund (IMF).

President Fernández’s words were also construed as a hint to Putin that Argentina would gladly help Russia expand its businesses more decisively into other nations in the region from a Buenos Aires beachhead.

Thursday’s meeting between the two leaders took place at the Kremlin. Fernández arrived Wednesday in Moscow and is now on his way to Beijing to deepen bilateral ties with China. The presidential tour also includes Barbados.

Fernández and Putin first met privately, after which the Argentine delegation had lunch with a team of Russian officials.

I would like to congratulate you with such a large-scale of vaccination performed; you have almost 78% of the population vaccinated. This is a very good result, Putin said. The Russian leader also highlighted the pace at which bilateral ties were growing.

After meeting with Putin, Fernández is due in Beijing at the invitation of Chinese President Xi Jinping to attend the opening ceremony of the Winter Olympic Games, as well as take part in other activities in Chinese territory, which will also span through Saturday, including a visit to Argentine athletes participating in the international event.

Fernández and Xi Jinping will meet privately Sunday. After that, the Argentine head of state will fly to Bridgetown, the capital of Barbados.