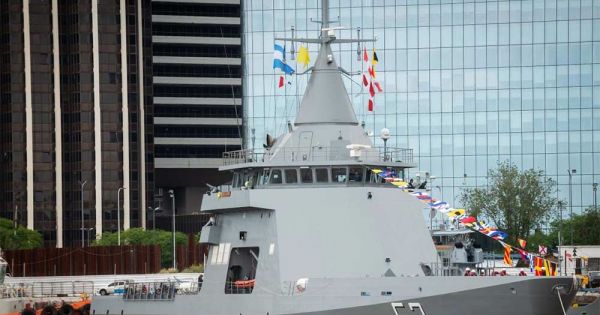 We are very happy to receive today the third OPV which aims to continue providing our country, through these naval means, with the capacity to carry out adequate patrolling of the Exclusive Economic Zone and maritime zones for the fulfillment of different missions imposed by current regulations, said Taiana at the ceremony.

The minister added that the OPVs that have already been delivered are in operation and allow the Argentine Navy to carry out essential operations for the defense of the sovereign interests of Argentina at sea.

Taiana also pointed out that the ARA Bouchard, was located at the eastern mouth of the Strait of Magellan to monitor the passage through the Argentine Sea of an international fishing fleet.

The incorporation of this new OPV reinforces the operational capabilities of the Argentine Navy for greater maritime patrolling of the EEZ and the area of maritime interests; care of the renewable and non-renewable resources of the sea and the fulfillment of international commitments regarding the capacity to provide support to safeguard human life at sea and improve support for the Antarctic Bases, the minister explained.

The ARA Storni is the third OPV purchased from France, after the ARA Bouchard and the ARA Piedrabuena earlier this year. A fourth OPV to be named ARA Rear Admiral Cordero is scheduled for 2022 and it will reportedly feature some improvements compared to the other three.

The ARA Storni was built by the Naval Group firm at the Piriou Shipyard. It was launched on May 10, 2020. On October 13 of this year, it was handed over to the Argentine Navy.

These acquisitions are a part of the Naval Maritime Patrol Capacity Recovery Project undertaken by the Argentine Navy.

The vessel features ice proven characteristics, which means it can sail in the cold waters of Antarctica, according to Defense sources.