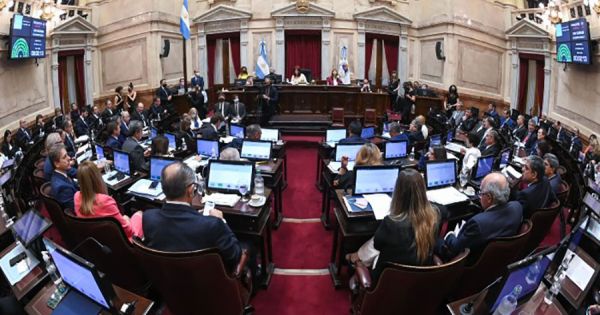 Argentina’s Senate Thursday approved the agreement with the International Monetary Fund (IMF) to repay the US$ 45 billion borrowed under the administration of former President Mauricio Macri in 2018.

The ruling Frente de Todos (FdT) of current President Alberto Fernández voted as per each Senator’s opinion, while almost the entire opposition bloc of the Macrist Juntos por el Cambio (JxC) supported the initiative, which had been okayed last week by the Lower House.

Shortly after 11 pm, the Upper House decided by 56 votes in favor, 13 against, and 3 abstentions, to accept the Extended Facilities program brokered by Economy Minister Martín Guzmán with the IMF.

During the 9-hour debate, the ruling party stressed there was nothing to celebrate, but it was only the best possible agreement to avoid default, despite harsh opposition from within the FdT.

Meanwhile, JxC sought to decouple their administration from the country’s current indebtedness and capitalized on the disagreements among FdT lawmakers for their own political gain.

We are facing a difficult decision, FdT rapporteur Ricardo Guerra said after 2.15 pm. By that time, the ayes knew they would reach two-thirds of the votes, as required for the bill to pass.

The bill we are dealing with would make it possible to reach an agreement that would allow, in the most immediate, to focus management efforts on the growth of the economy and a reduction of inflation that will result in the welfare of the population, Guerra explained.

The La Rioja senator highlighted the new deal did not represent a significant reduction in the debt that the previous administration had incurred.

Most of the 56 total votes in favor came from JxC (32), which voted with a near unanimity only marred by the abstention of Lucia Crexell from Neuquén, while the FdT cast 20 votes in favor and 13 against, including Oscar Parrilli, Juliana Di Tullio, Mariano Recalde, all of them belonging to Vice President Cristina Fernández de Kirchner’s (CFK) innermost circle.

You are going to say that we are responsible. But all debts are daughters of the deficit accumulated over time, so debts are the responsibility of all the governments that generated deficits, said Senator Martín Lousteau, now aligned with JxC but once the economy minister who put then-President CFK on the brink of impeachment with the so-called Resolution 125 case.

They left the economy broke, and they went to the Monetary Fund. Who made this credit? The IMF or the President of the United States? The skill that Macri had is that all the time he was badmouthing Venezuela. This was a political credit, first they gave him 50 thousand palos verdes [million dollars], then they added 7 thousand more, FdT Senator José Mayans, said before casting a positive vote.

Peronism has always been fraternal, and having divergences with respect to certain aspects does not mean collapse or any exposed rupture. Loyalty should not be confused with obsession. I wish some of you had put those sticks in the wheel that you now impute to us. But don’t worry about the FdT. Nobody but us, the Peronists, suffer the consequences of our mistakes and momentary disunions. After four years of Macri’s government, we are not going to get confused again, warned Senator María Inés Pilatti Vergara, also a member of CFK’s group, who ended up voting against the bill.

Contrary to speculations, CFK did preside over the session, although she went to her office time and again, during which time she was replaced alternatively by Senators Claudia Ledesma Abdala and Carolina Losada.