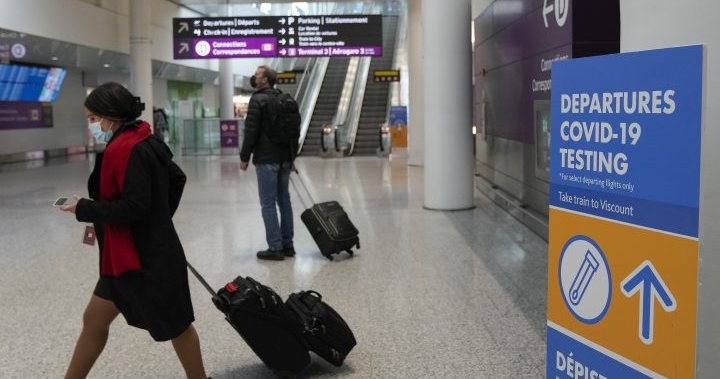 A majority of Canadians will not be travelling over the holiday period, according to a new poll, as the highly-transmissible Omicron variant continues to drive a rapid rise in COVID-19 cases at home and abroad.

The online survey included 1,157 participants and was conducted from Dec 15-20. The survey questions focused on air travel, which is considered relatively safer than cruise travel, in the context of COVID-19, though riskier than travelling by car.

Heeding the federal government’s travel advisory to avoid non-essential travel, 31 per cent of respondents said they have cancelled their flights due to the Omicron threat. Some 63 per cent said they were hesitant to book new flights because of it.

However, 70 per cent stated the Omicron variant, which is threatening to replace the Delta variant as the dominant strain in several countries, had not affected their travel plans.

The Omicron variant has already led to hundreds of flight cancellations due to staff shortages tied to COVID-19, disrupting holiday celebrations during one of the busiest travel times of the year.

Shifting regulation in response to Omicron and discomfort among Canadians is forcing many to reconsider their travel plans, said Kate Musgrove, director of RedFlagDeals.com.

Omicron and the holidays: How to celebrate safely

Early research shows the Omicron variant is more transmissible than Delta, even though it carries less risk of hospitalization and severe illness.

“The new variant being much more contagious is a big concern for people,” Musgrove told Global News.

Despite the worry, 76 per cent feel that airlines have instituted reasonable COVID-19 safety measures.

“So it’s not that they feel like the airlines aren’t doing a good job of keeping people safe. They just feel like, inherently, there is too much risk or too many unknowns,” said Musgrove.

In an effort to blunt the impact of Omicron, Canada has tightened its travel restrictions.

Starting this week, Canadians returning home from trips abroad, regardless of length, are required to show proof of a negative PCR COVID-19 test to re-enter the country.

On Dec. 15, the federal government issued a new travel advisory urging Canadians, regardless of their vaccination status, to avoid non-essential trips outside the country.

There was an “onslaught of cancellations” once the Level 3 advisory was reinstated by the government, said Richard Vanderlubbe, president of Tripcentral.ca.

With many schedule changes, new bookings, and people sitting on the fence, it’s been very “chaotic”, he said.

In November, over nine times as many Canadian residents travelling abroad returned via Canadian airports, compared with that number the same time last year, according to Statistics Canada.

Martin Firestone, a travel insurance broker in Toronto, said the latest variant and travel advisory has put the brakes back on travel — just when demand was picking up again.

“In general, in November, prior to Omicron, there was just full-tilt ahead, pent up demand [to travel],” he told Global News.

“We were finally starting to feel good again about travel — with two vaccinations, booster shots — so this has been a setback,” said Firestone, who is the president of Travel Secure.

5:46
Travel pivot: Advice from expert on adapting your travel plans

Travel pivot: Advice from expert on adapting your travel plans

While there is demand and desire to travel, the constantly changing COVID-19 restrictions are discouraging Canadians from packing their bags and getting on a plane.

“The downer is the concern raised by the government that you might end up having difficulty getting home, or border conditions could change, or anything else,” said Vanderlubbe.

Still, for those looking to book a flight, an overwhelming 71 per cent say it will be for pleasure. Only four per cent said they would travel for work purposes.

Nearly half the respondents said they will travel within Canada. Asia and Europe were the top international travel destinations, the poll results show.

“There is a pretty steep drop-off for travel outside of North America,” said Musgrove.

“A lot of that has to do with their own comfort with the risk level and maybe the idea that they may travel, get sick and then have to quarantine there, [which] obviously becomes much more complicated the further you are from home.”

—With files from the Associated Press