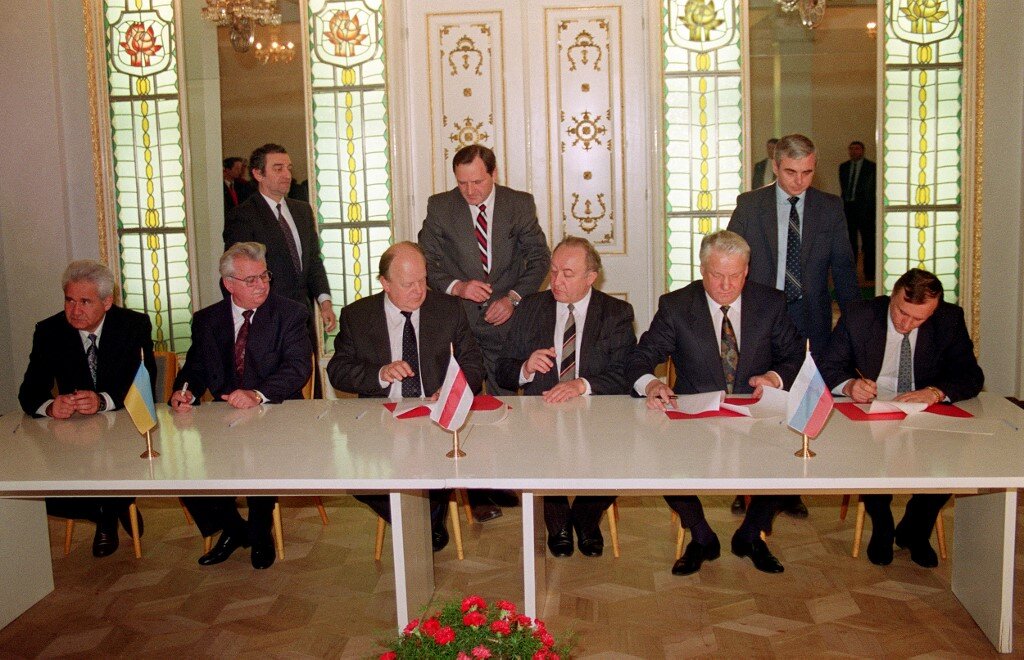 “It was a lovely winter evening. Light frost and quiet snow. A real crisp and clear December. There were three of us at the residence of the Chairman of the Supreme Council of the Republic of Belarus: Shushkevich, Kravchuk, and me. We have gathered there to decide on the fate of the Union.”

These are the words from the memoir of Russian President Boris Yeltsin. They are referring to an event that happened 30 years ago: on December 8, 1991, Belarus, Russia, and Ukraine signed the Belovezh Accords, establishing the Commonwealth of Independent States (CIS).

The Union of Soviet Socialist Republics (USSR), which incidentally came to life (also in December) in 1922, was over for good. Its laws ceased to apply on the territory of the member states of the Belovezh Accords.

In accordance with the European principle of inviolability of existing borders, the parties agreed not to change the borders existing between them. The CIS coordinating bodies were to be located in Minsk, the capital of Belarus. All former Soviet republics were invited to sign the agreement.

In the aforementioned memoir, President Boris Yeltsin – unlike his successor Vladimir Putin – does not claim that the collapse of the USSR was “the greatest geopolitical catastrophe of the 20th century”. Rather, he seeks to understand the systemic preconditions for what happened in Białowieża.

Naturally, he starts with the August 1991 coup, with the formation of the State Committee on the State of Emergency, when neo-Stalinists tried to save the “red empire” from disintegration.

Yeltsin recalls that almost all the “union republics” of the time reacted to these attempts by declaring their independence.

It was the moment of the duality of power, and it seemed like all the administrative bodies grew numb. The republics were the ones who had the real power because the center had compromised itself, was demoralized, and had lost its credibility.

And although the first and the only President of the USSR Mikhail Gorbachev back in November 1991 assured that a new union treaty would be signed on December 29, it was clear that these plans were utopian. Nobody was going to sign anything. At that time, Gorbachev seemed a lot like Shakespeare’s King Lear, giving his property away to his daughters.

In fact, in Russia, which declared its state sovereignty on June 12, 1990, the situation was even more complicated. There were de facto two presidents –Gorbachev Boris Yeltsin, although the first one was formally considered the President of the USSR. This diarchy could not have lasted long.

But, let’s get back to the text by Yeltsin. He writes: “The idea of a new statehood was not born today, not in my head or in the head of Shushkevich, or Kravchuk.” He then recalls the events of 1917-1918. Likewise, he points to the independence movements processes of different nations at that time, which began but were interrupted by the centralizing actions of the Bolsheviks. However, there was a powerful urge for freedom. “And Ukraine,” says Yeltsin, “was at the forefront of this process.”

Thus, on Dec. 8, 1991, the three politicians in Bialowieza did not “dismantle” the red superpower, a once-powerful Soviet Union, but continued the interrupted process, creating the CIS and seeking to keep it civil during this “divorce process” with the Russian Empire.

And so the time to sign the document,  the legal “divorce papers”, came. Kravchuk told me once about this moment, pointing out some details. Yeltsin began to hesitate, he started having some doubts. And then Kravchuk said: “Fine, say you are not signing. So what exactly will be your status upon return to Russia? For example, I am going back to Ukraine as the President-elect. And what will be your role? A subordinate of Gorbachev, just like it was before?”

Then Yeltsin, according to Kravchuk, resolutely took the pen and signed the agreement, saying: “Yes, we should see the last of Gorby.” Yeltsin said this and did not back down from that position.

Stanislav Shushkevich, the first Chairman of the Supreme Council of independent Belarus, also did not change his stand. However, he made history not only with this but also with the fact that his pension in Lukashenko’s era Belarus was a little more than one dollar. It is true what they say: the retirement package is a swan song of a salary. Especially for someone in the opposition.

Well, and what about Kravchuk? Throughout the years that have passed since the time of Bialowieza, he has taken different stands. Once he even mentioned that he regretted signing that agreement. Although, in my opinion, that statement had more politics than sincerity in it…

I prefer his other words, which he uttered shortly after the meeting of the three “Bialowieza bisons”. Here they are: “I did not destroy the Soviet Union, I am just one of those who did enough to collapse the empire. I am convinced that any empire brings misery to people.”