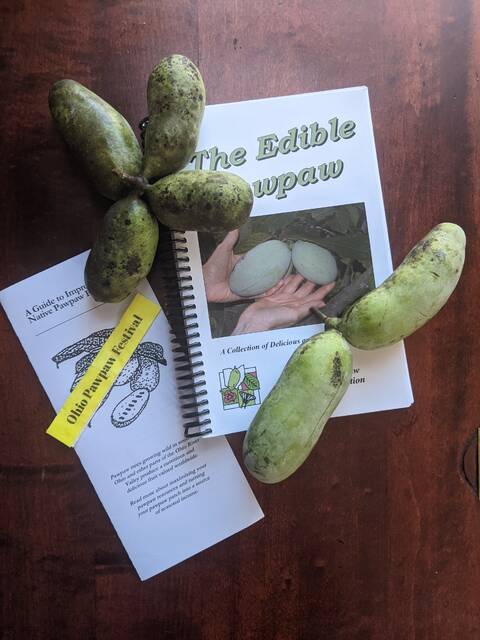 A culinary adventure road-trip took my husband, Alex, and myself across creeks, rivers, hills, hollars and railroad tracks of the Ohio River Valley. I had my heart set on going to the Ohio Pawpaw Festival for several years now and nothing was going to postpone it another year.

Held in Lake Snowden, Ohio around Albany, in Athens County, this unique festival celebrates one of America’s largest fruit trees, the pawpaw.

In its 24th year, the all-weekend event highlighted the rich history and future possibilities of the pawpaw through delectable food and beverages, in addition to a full line-up of presentations and activities covering pawpaw growing, cooking, genetics, medical use and other topics related to sustainability.

The festival even had a contest for the best and biggest pawpaw, a pawpaw cook-off, best pawpaw-related work of art, and my personal favorite, the pawpaw eating contest.

Any expectations I had of the event were exceeded above and beyond. If you have any interest in North America’s largest edible native tree fruit or if you just enjoy learning more about the native habitat around us, I encourage this autumn calendar staple.

The best part of the festival, learning and tasting new ways to cook with the pawpaw. So many incredible recipes are derived from the same base ingredient, pawpaw pulp.

It is no secret that I have been obsessed with this fruit for almost a decade now. The first time I discovered it I was excited yet so frustrated that it took this long for my taste buds to discover something I felt like I should have known about. Indigenous to our region, the pawpaw can be found in 26 states in 27 varieties ranging from Florida, Southern Ontario, and eastern Nebraska. Records of European explorers, settlers, Native Americans, and wild animals have provided evidence that this yummy and nutritious fruit sustained folks for hundreds of years on over.

You are probably wondering, if they are so abundant why don’t I see them in the grocery store? They don’t last long enough to make it there. Between the plants and the humans, plus an incredibly short shelf life, they just aren’t a grocery store item. I like to think this makes them even more special.

Still hungry to try a pawpaw? Well look no further than you or your neighbors backyard, or even your local nature preserve. It’s pawpaw season and the time is ripe. Still don’t believe me? You will be surprised if you reach out to a few friends in southern Ohio how popular this state fruit really is. One of my favorite parts of the pawpaw is how much people want to share it.

Since publicly began declaring my love of the magical fruit I have had more farmers or just folks who live in a pawpaw area share different varieties with me. It really is a special fruit. After you taste it you will want others to indulge in this native delight too.

The maroon colored flowers of the pawpaw tree appear in the spring but the clusters of fruit ripen in the fall. Harvest season in our valley is late August through mid-October. September is the month to start harvesting the fruit. Sample fruit from specific trees and get some sample weights of the fruit.

The ripe fruit are easily picked with a gentle tug or shake of the tree. Just watch out for falling pawpaws. Remember, they are a large fruit and will fall hard. If the deer hasn’t beaten you to them, you can gather them from the foot of the trees. Sometimes the best fruit has already fallen and may be beginning to darken. These are especially great for frozen delights.

After I get pawpaws, unless I’m removing the pulp immediately, I always refrigerate them. It vastly increases their shelf life.

Similar to a peach in flesh, the pawpaw is soft with a strong fruity aroma. A really ripe pawpaw can be eaten right then and there. The color ranges in green, yellow, and even dark flecks. Think banana colors when picking.

When a pawpaw is ready, it’s more than ready. A fully ripe fruit will only last a few days at room temperature. If you aren’t using it immediately, refrigerate it, this will help it last about a week. If you pick it before it’s ripe, it may keep for about three weeks. And similar to a banana, finish ripening at room temperature.

These ripening techniques are what keep the pawpaw out of most grocery stores and commercialized foods. Still enjoyed in modern America, but primarily in rural areas.

Most pawpaw enthusiasts can agree, the best way to enjoy pawpaws is to eat them raw, outdoors, picked from the tree when they are perfectly ripe. They are delicious just the way they are. Exotic, flavorful, and yes, native to our region. If you haven’t had one, start seeking them out. You will be amazed what you can get your paws on.

If you’re looking for inspiration and a full belly, look no farther than the beautiful region we are lucky enough to call home. I’ve included a few of my favorite new pawpaw recipes from the festival last weekend.

Tips for removing the pawpaw goodness from the flesh:

Looking at each pawpaw, when ripe you will find a dark line tracing from one end to the other.

Using a paring knife, cut along the line and twist pawpaw open in a way similar to how you would cut an avocado.

Once in two pieces, using a small spoon, remove the pits and scoop out the flesh. Remember, the flesh quickly oxidizes and changes color, also similar to an avocado, when exposed to air. Use immediately or add lemon juice to prevent this process from happening so quickly.

Wash and peel the pawpaw and mash into a bowl with lime peel.

Gradually stir in one pint of water.

Strain again. Be sure all the flavor is extracted. Add salt and sugar.

Created by the chefs at Casa Nueva Restaurant in Athens, Ohio. Winner of “Best Drink” at the 1999 Ohio Pawpaw Festival.

Blend together all ingredients until smooth. Serve cold.

Place all ingredients in a saucepan.

Simmer for one hour. May be used immediately or refrigerated after cooling.

Preheat the oven to 350 degrees and prep the loaf pan.

Sift dry ingredients together. Add to the butter mixture.

Fold in the pawpaw pulp, nuts and chocolate chips.

Pour into a loaf pan. Bake for 45 minutes or until a toothpick inserted into the loaf comes out clean.

The recipes and photos used in today’s article are from the kitchen of Chef Babz ([email protected]) with a little help from the Ohio Pawpaw festival and The Edible Pawpaw, a Collection of Delicious and Nutritious Recipes. By the Ohio Pawpaw Growers Association, 2008.