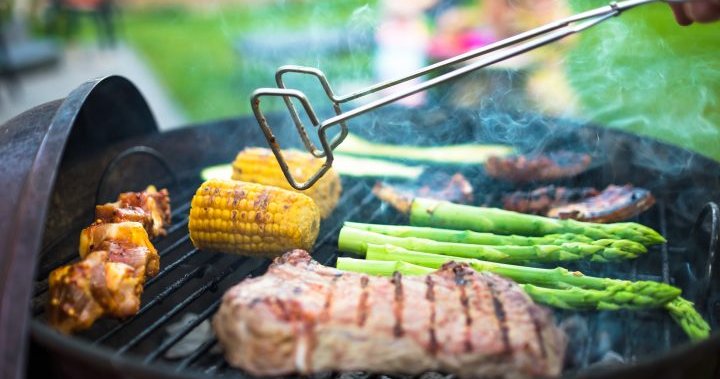 A popular summer past time, barbeques are in full swing in Canada – but is your grill putting you and others at risk?

With more people gathering in backyards and parks this year after two seasons of COVID-19 restrictions, experts say Canadians should not take the impact on their health and environment lightly.

“It represents a great danger and risk to our health because there are certain rules that people don’t follow when barbecuing,” said Dr. Marc Jeschke, director of the burn program at Hamilton Health Sciences.

Burns, smoke inhalation and other barbecue-related injuries typically increase over the summer starting in May, doctors tell Global News.

“There’s a seasonality to a lot of fire injuries and specifically related to barbecues that tend to happen as the weather starts to improve in Canada,” said Dr. Shahriar Sharokhi, a surgeon at the Ross Tilley Burn Centre (RTBC) at Sunnybrook Hospital in Toronto.

Jeschke said there is a “clear peak” in the summer, with patients coming in with significant facial and upper body burns.

Between 2005 and 2014, cooking equipment, including but not limited to barbecues, grills and portable warming appliances, were the leading source of ignition in residential fires, contributing to one-third of all incidents, according to the latest Statistics Canada.

In the United States, grills, hibachis and barbecues were involved in 10,600 home fires per year on average between 2014 and 2018, according to 2020 report by the National Fire Protection Association.

In Toronto, BBQ fire incidents increased last year and so far in 2022, 12 have been reported according to the latest city figures shared with Global News.

Jeschke said the danger is that burns and inhalation can happen “very, very fast,” so there is less time to react.

“Unfortunately, there’s a complete underestimation of barbecuing and the condition of the fire and how to treat barbecues … so we see a lot a lot of patients that come with significant injuries,” he said.

Across Canada, there are certain restrictions on where people can have barbecues.

In Vancouver for instance, no barbecues are allowed on sandy beach areas.

When used where they are allowed, a barbecue must be 75 cm from the ground and if there is an extreme fire warning, charcoal cannot be used – only propane is permitted, according the Vancouver Fire Rescue Services.

BBQ safety: How to know your meat is cooked & other tips

In Edmonton, solid fuel barbecues are prohibited for apartment use.

Meanwhile, in Toronto’s parks, a permit is required for portable barbecues. Only charcoal or briquettes are allowed in permanently fixed barbecues, according to the city code.

Besides personal risks, there are impacts to the environment – and the type of grill you use can make a difference.

Grills powered by natural gas or wood pellets release considerable amount of carbon dioxide which contributes to climate change, said Rebecca Saari, an assistant professor in the Department of Civil and Environmental Engineering at the University of Waterloo.

A wood pelletizer has less impact on the global carbon cycle and warming since it’s a renewable fuel but it will still release fine particulate matter, smoke, soot and other gases that are harmful for the environment, she said.

“We are releasing usually non-renewable, extra carbon into our atmosphere, which is going to heat up our earth system.”

Keeping cool: The need to adapt to a new climate reality on Canada’s West Coast

Barbecues may also produce odourless and tasteless carbon monoxide that can cause serious health problems or death if inhaled, according to Health Canada.

Barbecue smoke is a direct emission of fine particulate matter in the air, which leads to “more deaths worldwide than any other environmental exposure,” Saari told Global News.

A 2021 study published in Science Direct estimated a global total of 10.2 million premature deaths are annually attributable to the fossil-fuel component of fine particulate matter (PM2.5).

“Burning wood releases volatile organic compounds (VOCs) that can lead to formation of ozone as well, which is the second most harmful outdoor pollutant,” after particulate matter, she said.

“It might not seem like much using our barbecue (at) our houses, but they can add up.”

While barbecue fires can affect anyone, some people are at an increased risk of emissions exposure, said Saari. Those include children, the elderly and people with underlying conditions like heart disease or respiratory illness.

BBQs should only be done outdoors in a well-ventilated area and not in enclosed, indoor spaces, such as garages and sheds, experts say.

The general rule is to place the BBQ at a least three metres from your home or other structures and out from under eaves and overhanging branches.

“Typically you do not want to have barbecues in proximity to things that are flammable,” such as trees, brush or bushes, said Shahrokhi.

“A lot of us tend to like prop up our barbecues close to our fences. That’s a huge hazard,” he added.

Frequent cleaning is also important, Shahroki said, because material that builds up in the barbecue can catch fire.

He also advised checking for any gas leaks prior to setting up the grill.

Accelerants to speed up the grilling time can create a massive ball of flame which is why their use is discouraged.

“You just have to be vigilant, you have to be patient with the fires and you need to take the usual common sense,” said Shahrokhi.

Here are some other tips from the Canadian government keep yourself safe this BBQ season:

6:05
Fire safety tips to help you enjoy the cottage safely this summer

Fire safety tips to help you enjoy the cottage safely this summer – Jun 7, 2021