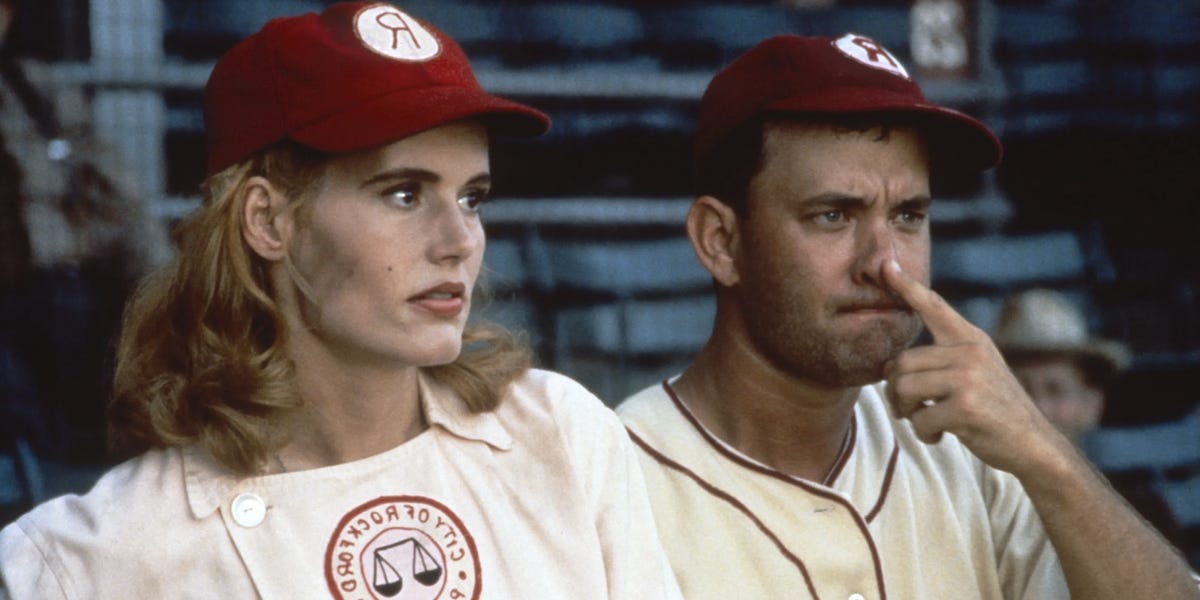 Of course, the best movie to watch before the new series is the 1992 original “A League of Their Own” starring Geena Davis and Tom Hanks.

“A League of Their Own,” released in 1992 and directed by Penny Marshall, is based on the real-life World War II-era women’s professional league, the All-American Girls Professional Baseball League (AAGPBL).

The film focuses on the Rockford Peaches, a women’s baseball team that was created after the MLB was put on hold after most men were drafted into World War II, and the various members of the team along with their alcoholic coach (and former Cubs player) Jimmy Dugan, played by Hanks.

“There’s no crying in baseball,” as screamed by Dugan, is one of the most iconic quotes in movie history.

Stream the movie on Prime Video.

Robert Redford’s starring role in “The Natural,” released in 1984, is one of his most beloved.

“The Natural,” based on the 1952 novel of the same name, starred Redford as Roy Hobbs, a former baseball prodigy whose career was derailed after he was shot by mysterious young woman.

Years later, he returns to the game with his trusty bat Wonderboy to prove once and for all that he’s one of the greatest ball players ever. Hobbs overcomes slumps, offers to throw games, and problems with his old gunshot wound in pursuit of his dream.

Of course, you can’t talk about “The Natural” without mentioning the movie’s theme, composed by Randy Newman, which has lived on in pop culture to this day.

See where you can stream “The Natural” here.

“Bull Durham” stars Costner as Lawrence “Crash” Davis, a veteran catcher in the minor leagues who is sent to the Durham Bulls to help coach the team’s new pitcher, Ebby Calvin LaLoosh (Tim Robbins), who has the potential to make it to the majors.

Simultaneously, baseball groupie Annie Savoy (Susan Sarandon) has chosen LaLoosh to be her student/lover for the season, while also flirting with Crash.

Many baseball fans cite “Bull Durham” as the most accurate baseball movie made. As MLB writer Ryan Wagner said, “‘Bull Durham’ is probably the most accurate depiction of baseball ever seen on film. And the reason it works so well is because it shows Minor League Baseball as it is: a ragtag bunch of guys, all desperate to make The Show, playing because they love the game.”

The original “Angels in the Outfield,” released in 1951, is a sweet story about a baseball coach learning to be more wholesome.

“Angels in the Outfield” stars Paul Douglas as Pittsburgh Pirates coach Guffy McGovern, who deals with the stress of being in last place by verbally abusing his team. After journalist Jennifer Paige (Janet Leigh) reports on his behavior, he wanders around Forbes Field until the voice of angel promises to grant him miracles if he cleans up his act.

Only eight-year-old Pirates fan and orphan Bridget (Donna Corcoran) can see the “angels in the outfield” helping out the down-on-their-luck Pirates, since it was her prayers that connected Guffy with the angel.

If you love this movie, you can also check out the 1994 remake starring Joseph Gordon-Levitt.

Stream the original “Angels in the Outfield” on HBO Max.

“Major League” (1989) is potentially the funniest movie on this list.

“Major League” begins with the death of the Cleveland Indians (now Guardians) owner. He’s left the team to his widow, Rachel Phelps (Margaret Whitton), who hates Cleveland and concocts a scheme to ruin the team in order to move it to Miami.

As part of her scheme, she hires a minor league manager to manage the team and devises a plot to create the worst team in major league baseball. Her roster includes Willie Mays Hayes (Wesley Snipes) who shows up to spring training uninvited, ex-con Ricky “Wild Thing” Vaughn (Charlie Sheen), aging catcher Jake Taylor (Tom Berenger) who can’t even throw to second base, and prima donna Roger Dorn (Corbin Bernsen), who only cares about retiring uninjured.

Against all odds, hijinks ensue, the team begins winning, and a baseball classic was born.

Stream “Major League” on Paramount Plus.

“42” is a heartfelt biopic about Jackie Robinson, the first Black player in Major League Baseball. It was released in 2013.

The late Chadwick Boseman had his breakout role with “42,” playing the iconic Brooklyn Dodgers second baseman. Robinson became the first Black player in the MLB when he was called up from the Kansas City Monarchs in 1947 by Dodgers owner Branch Rickey (Harrison Ford).

The film follows Robinson as he deals with racism from his teammates, the opposing teams, and in crowds across the nation, all while contending with the immense amount of pressure put upon him.

“Field of Dreams” (1989) focuses less on professional baseball and more on loving the game itself.

“Field of Dreams,” loosely based on the 1982 novel “Shoeless Joe,” is Kevin Costner’s second appearance on this list. In this film, he plays Iowa farmer Ray Kinsella, whose failure to bond with his late baseball-fanatic father John (Dwier Brown) still haunts him.

After he hears a disembodied voice tell him the (now-iconic) statement, “If you build it, he will come,” Ray decides to plow part of his cornfield in order to construct a baseball diamond on his farm. Over time, iconic baseball players from the past come to play a game, including the disgraced Chicago White Sox player Shoeless Joe Jackson (Ray Liotta).

Ray also connects with a former writer Terence Mann (James Earl Jones), who had a childhood dream of playing for the Brooklyn Dodgers, but has since distanced himself from the world.

This film is about more than baseball — it’s about fathers and sons, faith, regrets, family, childhood joy, and … well … baseball.

Stream “Field of Dreams” on Peacock.

Speaking of joy, no baseball movie list would be incomplete without 1993’s “The Sandlot.”

“The Sandlot” takes place in the summer of 1962, when shy fifth grader Scott Smalls (Tom Guiry) moves to a new town and becomes determined to join a group of kids playing pick-up baseball in their town’s sandlot, including Benny “the Jet” Rodriguez (Mike Vitar).

Besides baseball, “The Sandlot” also follows the kids overcoming the town’s “beast” (a dog), trying to snag a kiss from the local lifeguard, and just plain-old growing up.

Stream “The Sandlot” on Disney+.

“Fear Strikes Out,” based on Piersall’s 1955 memoir of the same name, follows Piersall from his time in Connecticut playing in sandlots as a kid all the way to the major leagues playing for the Boston Red Sox, all while being coached by his semi-abusive father John (Karl Malden).

During his time on the Sox, Piersall begins having extreme mental distress and is eventually admitted into a mental institution, is diagnosed as bipolar, and begins taking lithium. After his stay, he went on to play 17 seasons of professional baseball.

Notably, this film portrays therapy, electro-convulsive therapy, and generally getting help for mental distress in a positive light, a relatively radical stance for a ’50s movie to take.

“Moneyball” (2011) is the perfect movie for any statistics-head.

Brad Pitt and Jonah Hill co-star in “Moneyball” as Billy Beane, the general manager of the Oakland Athletics, and Peter Brand, an economics expert whose math-based way of looking at baseball totally changes the game.

Come for Pitt’s career-resurging performance as the superstitious (yet determined) Beane, stay for his unexpectedly great chemistry with Hill’s Brand.

The third Kevin Costner-led baseball film, 1999’s “For Love of the Game,” might be the worst of the three, but still deserves a spot.

“For Love of the Game,” which was inexplicably directed by Sam Raimi, is both a baseball story and a romance, as Costner’s aging pitcher Billy Chapel tries to balance his relationship with Jane Aubrey (Kelly Preston) with his responsibilities to the Detroit Tigers.

The film follows a flashback structure. As Billy pitches a potentially perfect game against the New York Yankees, he reminisces on his relationship with Jane, and also tries to distract himself from the pain of a hand injury he’s recovering from.

As it’s the last baseball movie (so far) that Costner starred in, we have to include this movie ont the list. Plus, shout out to John C. Reilly for his perfect performance as catcher Gus Sinski.

Stream “For Love of the Game” on Peacock.

“The Bad News Bears” stars Walter Matthau as Morris Buttermaker, an alcoholic ex-professional baseball player who is recruited to coach a youth baseball team, the Bears, which was formed after a group of parents sued the youth league for excluding the less-talented kids.

Buttermaker is able to whip the kids into shape, and even recruits a girl Amanda (Tatum O’Neal), the daughter of one of his ex-girlfriends, to be the team’s star pitcher.

The less we say about the 2005 remake, the better.

Stream “The Bad News Bears” on Hulu or Prime Video.

“The Pride of the Yankees” stars Gary Cooper as Lou Gehrig, the famed Yankee who died at the age of 37 due to ALS, which has been informally known as Lou Gehrig’s disease ever since.

The movie follows his relationship with his parents, his wife Eleanor (Teresa Wright), and his pure love for baseball and his teammates.

Try to watch Cooper’s performance of Gehrig’s final speech at Yankee Stadium, which famously concludes with “Today, I consider myself the luckiest man on the face of the Earth,” without crying. It’s impossible.

Stream “The Pride of the Yankees” on Prime Video.

“Eight Men Out” tells the story of the infamous Chicago Black Sox cheating scandal. It was released in 1988.

“Eight Men Out” is a dramatization of the 1919 Chicago “Black Sox” cheating scandal, in which eight White Sox players allegedly conspired to throw the 1919 World Series after the team’s owner Charles Comiskey (Clifton James) refused to to properly compensate star players.

Although they were all involved to varying degrees, all were punished the same way, a permanent ban from professional baseball. As such, the movie goes down as something of a tragedy, especially as a double feature with “Field of Dreams.”

Stream “Eight Men Out” on Hulu or Prime Video.

“Everybody Wants Some!!” is a more recent addition to this list, as it was released in 2016.

“Everybody Wants Some!!” follows a college baseball team in 1980 during pre-season as they bond, chase girls, do a (little) bit of growing up, fall in love, and more.

From the director of classics like “Before Sunrise” and “Dazed and Confused,” Richard Linklater, “Everybody Wants Some!!” is the perfect end-of-summer movie to get you hyped for the playoffs.

Rent “Everybody Wants Some!!” on Prime Video.

“Take Me Out to the Ball Game” (1949) stars Frank Sinatra and Gene Kelly as musical baseball players. Need we say more?

Yes, we all know the song. But did you know there’s a musical named after the song that follows the fictional Chicago Wolves as they travel across the country, and stars Sinatra and Kelly as two part-time players, part-time vaudevillian performers?

Rent “Take Me Out to the Ball Game” on YouTube.