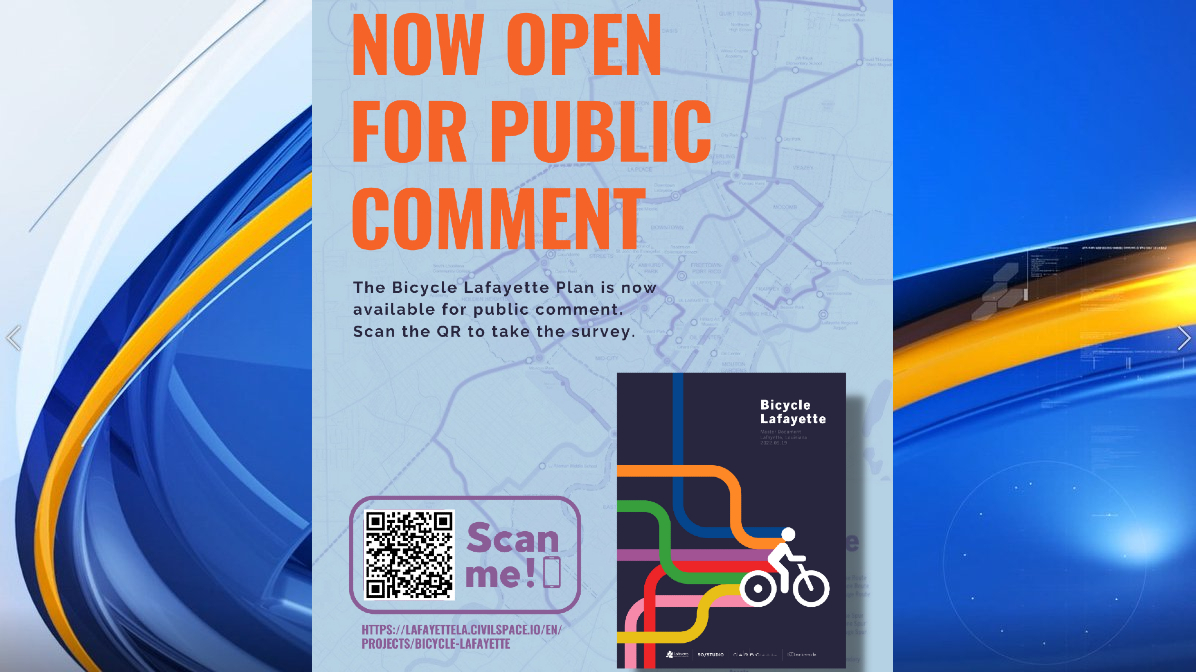 LAFAYETTE, La. (KLFY) — After years of calls for safer bicycling options from citizens in Lafayette, the Lafayette Consolidated Government (LCG) is getting closer to solidifying a master plan to make the city bike-friendly.

LCG is now seeking public input on the Bicycle Lafayette Plan, which includes about 40 miles of proposed bikeways and trails and an almost nine-mile “Véloop” route, which would connect 17 neighborhoods from Rotary Point to Pontiac Point, and 11 city assets, including downtown, the Oil Center, UL-Lafayette, South Louisiana Community College and points in between.


New plan for bike lanes and trails unveiled by LCG

Mayor-President Josh Guillory said bicycle infrastructure is a valuable asset to the community. “Not only does it encourage a healthier lifestyle but also attracts residents, improves property values of homes near bicycle paths, and increases tourism, in turn, boosting the economy.”

The SO Studio developed and designed the plan through community input with four main goals in mind: safety, connectivity, comfort, and equity.

Equity considerations are key components of the plan. SO Studio discovered disparities and incorporated these factors when designing bicycle routes:

Nick Hernandez, the Pedestrian and Bicycle Coordinator for LCG said, “I strongly encourage the public to participate in this survey. The more input we receive on this plan the more it is legitimized. The survey we did back in March had more than 200 participants. We hope to break that record with the survey we are releasing with the first draft of the plan today.”

Visit https://lafayettela.civilspace.io/en/projects/bicycle-lafayette to review the plan, designs, and to take the short survey.