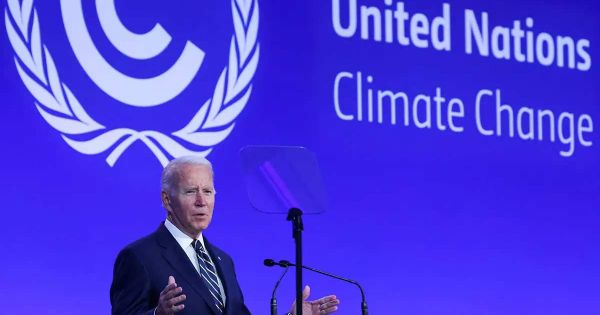 US President Joseph Biden Monday said the COP26 climate summit in Glasgow should mark the starting point of a decade of ambition and innovation to fight climate change, which he believed is an existential threat. The summit is often billed as essential to putting the landmark 2015 Paris climate accord into action.

This is the decade that will determine the next generations. It is the decisive decade in which we have the opportunity to show ourselves that we can maintain the goal of limiting warming to 1.5 degrees, Biden warned. He also insisted climate change was not something hypothetical, but rather something which already affects people in the form of uncontrolled fires, floods or droughts.

Biden also lauded a separate US-European Union steel agreement announced Sunday as a chance to curb imports of “dirty” Chinese steel forged by coal power. It’s another step toward potentially using Western markets as leverage to persuade China, the world’s top climate polluter, to ease up in its enthusiasm for coal power.

Rather than a quick fix, “Glasgow is the beginning of this decade race, if you will,” Biden’s climate envoy, John Kerry, had told reporters Sunday. Kerry also defended the outcome of the G20 meeting in Rome, where leaders agreed on a series of measures, including formalizing a pledge to cut off international subsidies for dirty-burning, coal-fired power plants. But G-20 leaders offered more vague pledges than commitments of firm action, saying they would seek carbon neutrality “by or around mid-century.”

Since the signing of the Paris Agreement in 2015 with the goal of reducing its carbon footprint, the US has actually increased carbon emissions, but steps have been taken in thye opposite direction, while major polluters like China, Russia and Saudi Arabia have no immediate intention of following suit.

Biden told reporters Sunday night he personally found the outcome of the Rome summit “disappointing,” because “not only Russia but China basically didn’t show up in terms of any commitments to deal with climate changes.”

The Biden administration Monday released its strategy for turning talk into reality in transforming the country into an entirely clean energy nation by 2050. The long-term plan, filed in compliance with the Paris agreement, lays out a United States increasingly running on wind, solar and other clean energy, Americans zipping around in electric vehicles and on mass transit, state-of-the-art technology and wide open spaces carefully preserved to soak up carbon dioxide from the air.

The Biden administration has succeeded, over 10 months of diplomacy leading up to the Glasgow summit, in helping win significant new climate pledges from allies. That includes persuading many foreign governments to set more ambitious targets for emissions cuts, promoting a global pledge to cut emissions of a potent climate harm, methane, and the promise from leading economies to end funding for coal energy abroad.

European leaders make clear they are happy to see Biden and the U.S. back in the climate effort after his predecessor, Donald Trump, turned his back on the Paris accord and on allies in general. European Commission President Ursula von der Leyen smiled at Biden throughout the announcement on Sunday’s steel deal, calling him “dear Joe.”