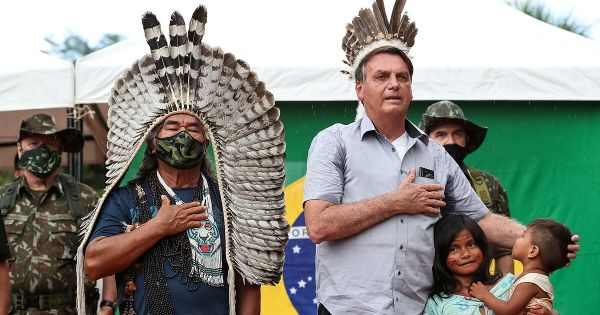 Brazil’s Justice Ministry Wednesday awarded President Jair Bolsonaro the medal for indigenist merit, a distinction which is granted to outstanding personalities who stand for the good of the native communities. The head of state was deemed worthy of such an accolade in recognition of the relevant services of altruistic character, related to the welfare, protection, and defense of the indigenous communities despite his notorious actions regarding the economic exploitation of the native ancestral lands.

The measure was highly criticized by indigenous and environmentalist groups.

Sonia Guajajara, coordinator of the Articulation of Indigenous Peoples of Brazil (APIB), considered the award absurd and assured that the association will try to have it annulled in court.

Joenia Wapichana, Brazil’s first indigenous lawmaker, also disagreed with the measure in favor of someone who has been in office for three years of many setbacks and attacks on the rights of the indigenous peoples.

Bolsonaro has promised since his inauguration in 2019 not to demarcate one more centimeter of land for indigenous peoples, who account for 0.5% country’s population of 213 million, and whose reserves represent 13% of the country’s territory. The President also promised to open existing reserves, already hit by deforestation, illegal mining, and illegal timber trade, to additional extractive activities.

Supported by its agribusiness allies in Congress, Bolsonaro advanced several projects considered harmful to indigenous people and the environment, including one that seeks to legalize mining exploitation in the reserves.

It is a mockery that the same government that is trying to free mining in indigenous lands, putting at risk the existence of those peoples so persecuted and mistreated, has the gall to award itself medals of ‘merit’ for all these evils done in the last three years, Congressman Alessandro Molón, coordinator of the Environmentalist Parliamentary Front said. Molón filed a motion to annul the measure.

Meanwhile, Bolsonaro has reportedly asked Russian President Vladimir Putin to help Brazil develop a nuclear submarine, a project which has been stalled due to lack of cooperation from the United States.

According to Folha de São Paulo, talks with the Russian state-owned atomic energy company Rosatom about participation in the Brazilian Angra 3 nuclear power plant would be the civilian side of the agreement on the submarine, of which there is no record in the official documents released after Bolsonaro’s talks with Putin last Month in Moscow before the military operation in Ukraine was launched.

After his encounter with Putin, Bolsonaro allegedly met with Brazilian businessmen and said that there was interest in the nuclear area due to the propulsion of his submarine, hinting that the nuclear project was discussed. Folha also said the issue of the submarine dated back to 2018, when Brazilian authorities were clear that the US was not willing to help with the certification of the fuel that had to be used in the ship’s reactor.

Brazilian Navy teams reportedly went to Washington time and again to discuss the terms of cooperation, but with no specific results, after which the Brazilian Foreign Ministry began to look for alternatives.

When Bolsonaro took office in 2019, talks were paralyzed. Bolsonaro’s foreign minister at the time, Ernesto Araújo, was an advocate of total alignment with the US and vetoed any partnership with Moscow, but after his departure from office, in March 2021, talks with Russia were resumed.

The key man behind this rapprochement is Secretary of Strategic Affairs Flávio Rocha, who already went to Moscow at the end of 2021.

The Brazilian Navy has had a nuclear program since 1979, and although it masters the complete fuel cycle used in the reactors and since 2009 has had a program for the construction of a nuclear submarine, it has technical difficulties, especially fuel certification, Russia’s state-owned Sputnik newswire service reported.

Now, according to Folha, the agreement with Russia could be in danger due to the consequences of the economic sanctions, in addition to the resistance of the US and the International Atomic Energy Agency.