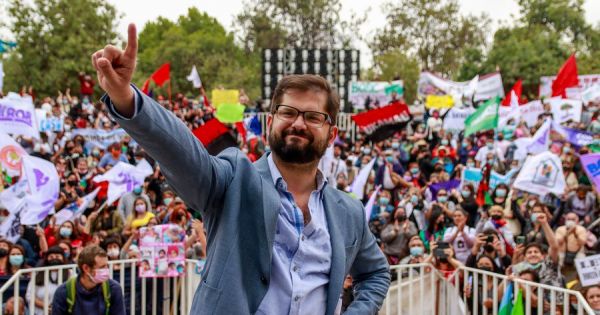 Boric thus reversed the Nov. 21 results with the support of young people and women from popular sectors, in addition to many supporters of economist Franco Parisi, who had called to vote for Kast but was not followed.

Kast was strong in southern regions such as La Araucanía (where the Mapuche indigenous conflict is going on), Maule, Ñuble, Biobío, Los Ríos, and in Tarapacá, in the north, where irregular migration is focused.

But Boric expanded his advantage in the regions he had won, after receiving support from center-left first-round contenders such as Yasna Provoste and Marco Enríquez Ominami.

Incumbent President Sebastián Piñera congratulated Boric on his victory and invited him over to their first work meeting at La Moneda.

Boric followers took to the streets to celebrate, while Kast told a group of his followers that we are all little servants of a greater cause, which is Chile. Kast tweeted a photo of himself on the phone congratulating Boric on his grand triumph.

I am going to be the president of all Chileans, Boric said. At age 35, he will become Chile’s youngest modern president when he takes office in March. He was among several activists elected to Congress in 2014 after leading protests for higher quality education. On the stump, he vowed to bury the neoliberal economic model left by Gen. Augusto Pinochet’s 1973-1990 dictatorship and raise taxes on the super-rich to expand social services, fight inequality and boost protection of the environment.

On the other hand, Kast had never hidden his liking of Pinochet’s policies, which ended up setting a limit to the number of votes he could hope for. Boric was able to reverse the difference by a larger margin than even pre-election opinion polls forecast by expanding beyond his base in Santiago and attracting voters in rural areas. In Antofagasta, where he finished third in the first round, he trounced Kast by almost 20 points.

Kast, 55, a devout Roman Catholic and father of nine, emerged from the far-right fringe after having won less than 8% of the vote in 2017. He rose steadily in the polls this time with a divisive discourse emphasizing conservative family values and playing on Chileans’ fears that a surge in migration — from Haiti and Venezuela — is driving crime. Kast’s brother, Miguel, was one of Pinochet’s top advisers. And his German-born father had been a member of Adolf Hitler’s Nazi party.

Boric, who is backed by a coalition of leftist parties that includes Chile’s Communist Party, brought more centrist advisers onto his team and promised that any changes would be gradual and fiscally responsible.

In the meantime, a newly elected convention is rewriting the country’s Pinochet-era constitution. The convention could in theory call for new presidential elections when next year and if the new charter is ratified in a plebiscite.