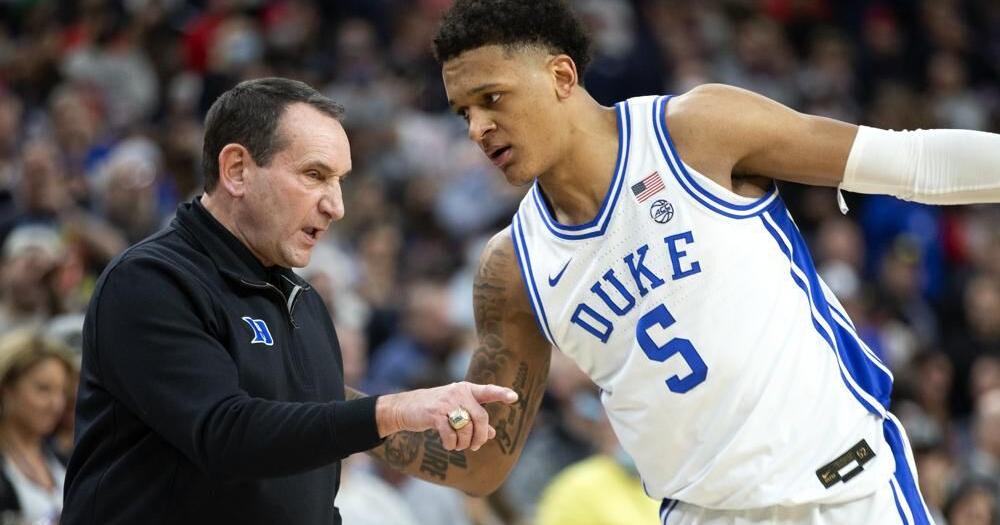 The 2022 NBA Draft will unfold Thursday at 8 p.m. from the Barclays Center in Brooklyn N.Y., televised on ABC (first round only) and ESPN.

John Calipari has two likely first-rounders — Shaedon Sharpe and TyTy Washington — from Kentucky. No players will be called from Louisville, Indiana or Western Kentucky.

But there’s plenty to discuss before commissioner Adam Silver begins the show. Let’s get started.

1. Did Duke coach Mike Krzyzewski deserve more heat for not finishing his retirement tour his arms wrapped around the NCAA championship trophy?

Can you imagine what the loudest voices in the college basketball media world would have said if Calipari, Chris Mack, Archie Miller, Rick Stansbury, Tom Crean, Tubby Smith or Fred Flinstone would have exited short of a national title with a team that featured four likely first-round picks?

Would they have said Coach K just rolls out the balls?

That he forgot how to defend the three-pointer? That he didn’t know how to attack a zone?

I don’t expect a discouraging word to be uttered about Coach K during the ESPN telecast Thursday but understand this:

Duke had more NBA talent than any team in America last season — and it wasn’t close.

John Hollinger of The Athletic is my Go-To guy for NBA Draft and college player evaluation. Hollinger projects three Duke players will be selected in the lottery and four will go in the first 22 picks.

That list starts with Paolo Banchero, a forward that Hollinger has as the No. 3 selection to Houston.

Hollinger likes guard A.J. Griffin at No. 12 to the Thunder, center Mark Williams No. 13 to the Hornets and guard Wendell Moore at 22 to the Grizzlies.

Talent was not the reason this Duke team lost seven games, including Coach K’s Cameron Indoor Stadium farewell to North Carolina, the Atlantic Coast Conference Tournament final to Virginia Tech and a national semifinal to the Tar Heels.

2. Will coaches recognize what the Final Four said about the path to success in college basketball?

The Green Room at the Barclays Center will not look like the coaches’ corner from the Final Four. Other than Coach K (or perhaps his successor Jon Scheyer), the only Final Four coach with reason to attend the draft is Bill Self of Kansas because he’s the only other 2022 Final Four with a first-round pick.

That would be Ochai Agbaji, a shooting guard that Hollinger slots at 15, the first pick outside the lottery.

North Carolina has nothing, with Armando Bacot, R.J. Davis and Caleb Love all returning to Chapel Hall. There’s also nothing to see from Villanova.

Ohio State, Kentucky, Baylor and Arizona are projected to have two players taken in the first round.

Their combined 2022 NCAA Tournament record was 4-4.

3. Has the Big Ten cleared the runway for Indiana to lift off next season?

If you trust Hollinger as much as I do, you’ll argue that a lack of NBA talent was not the reason for the Big Ten’s massive NCAA Tournament flop.

In Hollinger’s mock draft, the Big Ten tied the ACC with six first-round selections — and the strength of the ACC was concentrated in four Duke players. Five Southeastern Conference players are projected for round one and the Big East has one.

When you look at the Big Ten talent drain — Jaden Ivey, Purdue; Keegan Murray, Iowa; Johnny Davis, Iowa; E.J. Liddell and Malaki Branham of Ohio State and Bryce McGowens of Nebraska are all in Hollinger’s first 26 selections — you understand why college basketball insiders like Andy Katz tout the Hoosiers as a possible Top 10 team next season.

For the record, Kentucky, Murray State and Purdue, the three teams that Holloway and Saint Peter’s eliminated on the Peacocks’ march to the Elite Eight, all have players ranked on The Athletic’s list of Top 100 draft prospects.

The Peacocks do not.

Of course, Holloway used his NCAA run to upgrade to the head coaching position at Seton Hall, where he will be expected to win tournament games and recruit NBA-level talent.

That’s the way it works, right?

5. Is there a more intriguing prospect than Jake LaRavia?

As I mentioned earlier, six ACC players are forecast to be taken in round one — the four Duke guys; freshman Blake Wesley of Notre Dame and LaRavia of Wake Forest.

Wake had the ACC player of the year last winter. But it was guard Alondes Williams, not LaRavia.

In the Associated Press voting, LaRavia did not earn first- or second-team all-ACC recognition.

That is not surprising. In Class of 2019 high school rankings at 247 Sports, LaRavia was listed as a 0-star recruit.

LaRavia played two seasons at Indiana State before transferring to Wake Forest. He excelled as a 6 foot, 8 inch forward who made better than 38 percent of his shots from distance.

LaRavia is projected to be selected in the final 10 picks of the first round. Take a bow, young man.