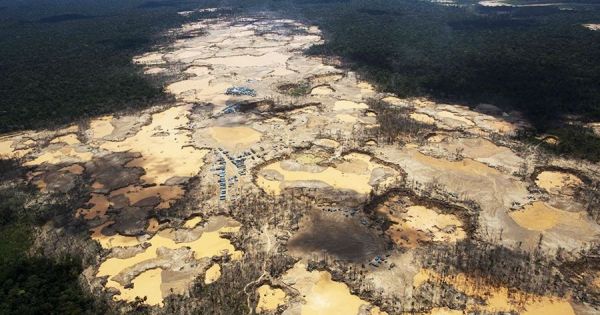 Brazil’s Ministry of Agriculture estimated this week 1 million hectares per year will suffer deforestation until the year 2030, despite Vice President Hamilton Mourão’s announcement Monday that plans to avoid it would be announced at the upcoming 26th United Nations Conference on Climate Change (COP-26) in Glasgow.

Mourão said Brazil will commit to reducing greenhouse gas emissions by 37% until 2025 and 43 % until 2030. Nevertheless, the increase in meat production devised by the Agriculture Ministry would entail the deforestation of 1 million hectares per year until 2030 in Brazil, according to environmental analysts.

On September 30, 2021, a study published by Map Biomas Amazonia showed that the region lost 52% of its glaciers in its Andean region, and 74.6 million hectares of its vegetation cover in the period 1985-2020. The surface is tantamount to all of Chile’s territory.

Foreign Trade Secretary José Buainain Sarquis said “the G20 summit coincides with the start of COP26 in Glasgow, UK. So, obviously, due to the relevance of the issue, it will be on the leaders’ agenda. Brazil supports a very strong consensus in favour of emission reduction targets that will allow the planet to control global warming.”

In the meantime, the environmental situation in Brazil is the drought in the world’s largest wetland, which lost 29% of its water surface between 1988 and 2018, at a pace of almost 1% yearly. At this rate, the wetland will be dry in seven decades.

In addition to that, and although the Government of Brazil is committed by law to the preservation of 80% of its Amazon, it cannot give up road construction and mining in the world’s largest rainforest, Mourão said. We cannot abandon the possibility of exploiting the great mining wealth of the Amazon. This exploitation will be carried out with the parameters of the 21st century and respecting environmental legislation, but it is necessary, the Vice President explained.

Mourão, who presides over the Council of the Amazon, insisted that the State has an obligation to preserve the plant lung, but also to improve the living conditions of those in the region. He also mentioned the possibility that the BRICS bank (the forum made up of Brazil, Russia, India, China and South Africa) might finance a project to exploit potassium in the state of Amazonas. When we have the environmental license and the authorization of the indigenous communities that may be affected, although the deposits are not located in any reserve, we will launch a project that will allow Brazil to be self-sufficient in the production of potassium, a source of very important fertilizers for one of the largest agricultural producers in the world.

Mourão also pointed out the forest code establishes that Brazil has to preserve 80% of the Amazon, a region that spans more than half of the country’s 8.5 million square kilometres, but the other 20% can be used for other activities, such as agriculture or mining, he said.

He also maintained it was essential to finish the reconstruction of federal highway BR319, which links Porto Velho with Manaus. It is a road with strategic importance because it allows access to the Amazon not only by plane or boat to serve the population. It makes logistics easier.”

Despite deforestation and forest fire rates in the Amazon reaching alarming levels since far-right leader Jair Bolsonaro took office as Brazil’s president in January 2019, Mourão said the situation improved in 2021. The worst year was 2019, but this year we had a reduction in deforestation, which could be better, as well as a 40% drop in fires. These are numbers that reveal that actions to combat deforestation and forest fires environmental agencies with the support of the Armed Forces are beginning to show results,” he said.

The vice president admitted the participation of the military in the fight against deforestation will not be renewed next November but the Armed Forces will continue to support environmental agencies. According to official data, deforestation in the Amazon fell from 7,869.7 square kilometres between January and September 2019 to 7,063.1 kilometres in the same period in 2020 and to 7,010.5 kilometres in the first nine months of this year.