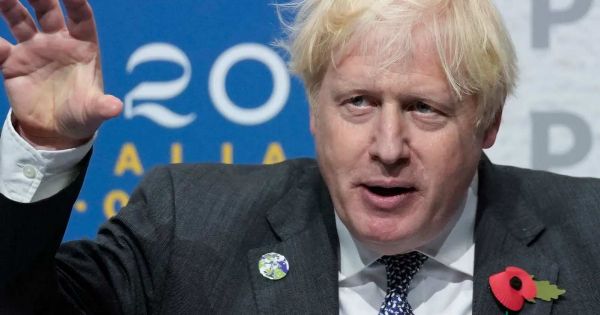 British Prime Minister Boris Johnson Monday insisted on the responsibilities world leaders are facing, during his opening speech at the Conference of the Parties to the United Nations Framework Convention on Climate Change (COP26).

“The global outrage will be irrepressible if the leaders gathered in Scotland for the great UN summit on climate change just talk and don’t act,” Johnson said. All those promises will be nothing more than blah, blah, blah, he added without ever admitting those words were like quotes from climate activist Greta Thunberg.

Johnson had spoken at the final press conference of the G20 summit Sunday in Rome, where he focused on the need for urgent action on the globe’s climate emergency. The British head of government also called for an additional effort to reach more ambitious agreements to prevent global warming. We have made reasonable progress in the G20 … but it is not enough, he said.

Johnson also said Monday that the world was in roughly the same position as James Bond as he tries to deactivate a doomsday advice in his films. But the tragedy is this is not a movie and the doomsday device is real.”

The clock is ticking to the furious rhythm of hundreds of billions of pistons and furnaces and engines with which we are pumping carbon into the air faster and faster… and quilting the earth in an invisible and suffocating blanket of CO2, raising the temperature of the planet with a speed and abruptness that is entirely man made, Johnson went on.

The longer we fail to act and the worse it gets and the higher the price when we are forced by catastrophe to act, he explained as he warned future generations would not forgive them if they did not act – and would be right to do so.

Inspired by his predecessor Winston Churchill, Johnson said that: While Cop26 would not be the end of climate change, it can and it must mark the beginning of the end.

Around 120 heads of state and government are attending the world leaders’ summit at the start of the Cop26 talks, where countries are under pressure to increase action in the next decade to tackle dangerous warming.