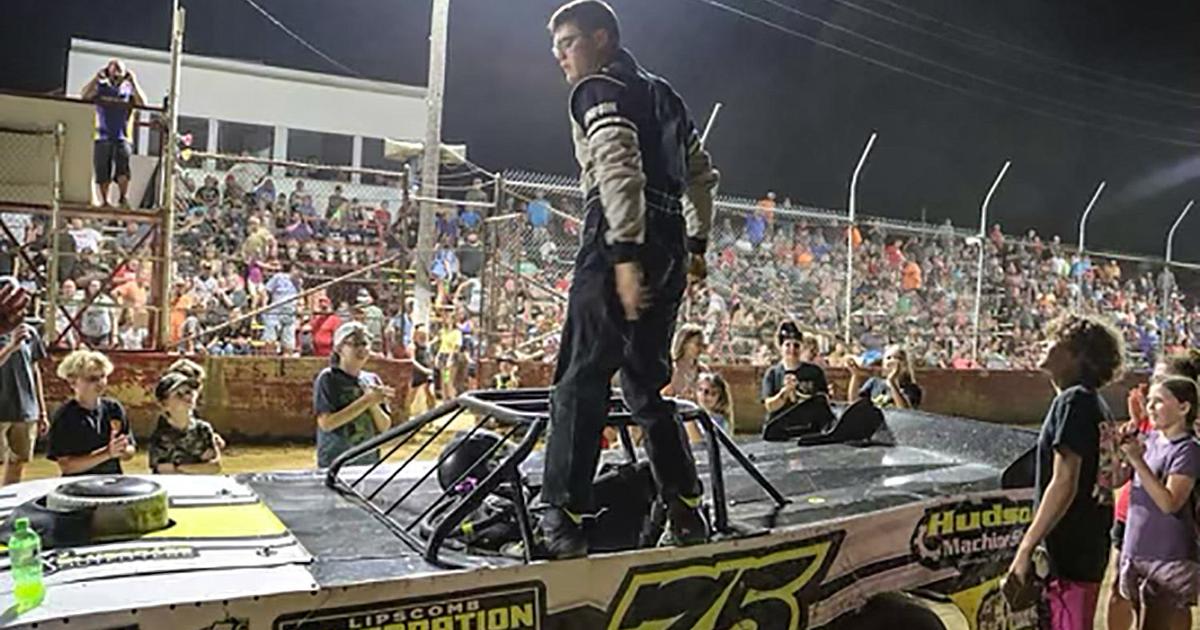 Working on a family race car in the garage in the 100-plus degree heat of the summer got the payoff last Sunday night for Carson Brooks and his racing family at Windy Hollow Speedway.

The racing community has been strong out at the western Daviess County track for decades. And that was shown in full force when Brooks’ car got caught up in a wreck during an early racing heat in the Street Stock division and looked for the most part destroyed.

“When I got out of the car I thought it was beyond repair,” Brooks said. “We were coming off a win the week before, we had high expectations for the money race. We came out for our heat race, we were mid pack, got caught up in a wreck and it demolished the sides and front of the car.”

Brooks has a crew of five, including his dad, Eric, who help with the Street Stock car that they have built themselves. They didn’t have a lot of time to try and get the car back together for the feature race.

“We had the body off that car,” Eric said.

And they had way too much repair work to do in the time they had to try and get the car ready.

“The next thing we knew we had friends and family come down from the stands, there were about 20 people come down and help,” Eric said. “Without them we would’ve been close to not making it. We took it totally apart and put it back together. They gave us some laps at intermission to let us check it out.”

“I started 13th, I was pretty far back in the field and ended up making our way to the front,” Carson said. “The car was perfect for the feature race. I was so amazed with all the people who got out of the stands and helped us get the car together. My dad thought about putting it on the trailer and leaving.”

Carson thought if they could get the body back together the car would be fine running.

“My dad has final say so, he’s always going to put me in a good situation,” Carson said.

The 22-year-old has been racing at Windy Hollow for five years, and his family has been racing in Daviess County for a long time. Eric raced at Kentucky Motor Speedway and at Salem, Indiana for more than two decades.

“He’s known it since he was a little kid, it’s in his blood,” Eric said. “I thought I was getting out of it, and he decided to get in go karts, we did that for about two years.”

Carson decided to start learning the driving skills to be a winner with big body cars, and he has been doing some traveling like to Western Kentucky Speedway at Madisonville.

“He’s wanting to spread out some, but he needs more seat time before we do that,” Eric said.

Carson was involved in the Top Dog racing series weekend at WK Speedway and Windy Hollow a few weeks ago.

“At Windy Hollow I’m very confident driving there,” Carson said. “We’ve had a lot of things gone right this year, our luck kind of changed. The past year we had some ups and downs, the car wasn’t where it is now. We’ve made leaps in chassis adjustments, and with my driveability and experience. I’ve gained a lot of confidence where we’ve raced bigger events, I’ve learned a lot about making adjustments in the driver’s seat. I learned a lot from those very experienced guys, some have been racing 40-plus years.”

Windy Hollow Speedway will take this Sunday off to give drivers, crews and management a break. Racing will resume at the Speedway on July 17. There was a full house last Sunday at WH Speedway for its Fourth of July weekend celebration.

“We’re having 80-90 cars for racing, and it brings the crowd in when they’re watching 15-20 cars in the feature,” Carson said. “When we get to race big crowds (car numbers), it sorts the drivers and the experience shows through. You’re saving equipment early, you want to keep the fenders on.”

Carson said he bided his time in the Street Stock feature, then he started working his way to the front in a good groove on the track.

“We’re now running for the points championship,” Carson said. “It’s a pretty competitive family sport, we have a really good time with it. Our fan base has grown, social media has taken off, it just makes it fun for us. It makes it worth it when you’re out in the garage and it’s 110 degrees and you’re working on your car.”