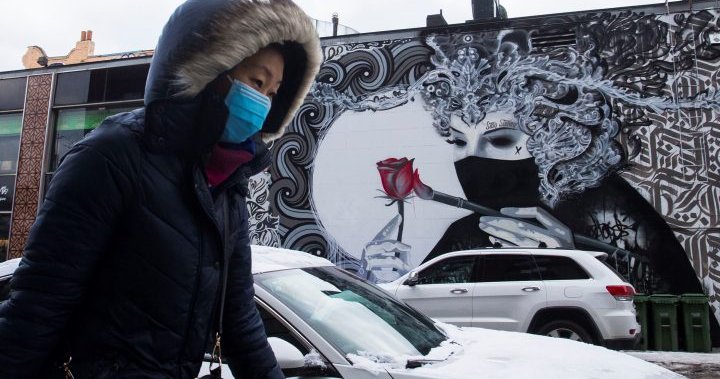 Canada added a record 14,456 new cases of COVID-19 on Wednesday as the federal government revealed expanded aid benefits to help those impacted by the rapid spread of Omicron.

Canadians should ‘hunker down’ to slow Omicron spread, Trudeau says

So far, more than 1.8 million patients have recovered after being diagnosed with COVID-19, and 65,807,168 vaccinations have been administered to date.

The new daily infections tallied on Wednesday represent the highest ever new infections recorded in a single day so far since the pandemic, according to Global News data.

Currently, the data also points to Canada registering another pandemic high: a seven-day average of 8,930 cases as of Dec. 21.

Wednesday’s figures come amid growing concerns from government and public health officials over the spread of the new, highly-contagious Omicron COVID-19 variant.

In a press briefing Wednesday, Canada’s chief public health officer Dr. Theresa Tam said that there were at least 2,360 confirmed cases of the variant identified in the country to date.

Since the variant was first identified in Canada, provinces like Ontario, B.C. and Quebec have re-enacted strict public health restrictions in the last several weeks to curb a rapid rise in COVID-19 cases.

In response to the public health measures — which include limiting the capacities of restaurants and stores by 50 per cent — the federal government on Wednesday introduced an expansion to the eligibility of its new Canada Worker Lockdown Benefit (CWLB).

The expansion now allows for any worker to apply for the $300-per-week program if their workplace has been hit with the capacity-limiting restriction of 50 per cent or more.

You would also need to have lost 50 per cent or more of your income as a result of capacity limits in order to apply for the benefit, according to the government.

“Here’s the bottom line: we need, all of us, (to) do what it takes so Canadians are protected and to have what you need to weather the storm.”

Last Thursday, there were more than 43,000 active COVID-19 cases across Canada — a number that has nearly doubled in less than a week, standing now at just over 82,000.

“In less than a week, we’ve seen a rapid acceleration of epidemic activity in locations across Canada,” said Tam.

“While Delta is still spreading in many areas, Omicron is increasingly responsible for a rapid rise in case counts.”

Tam warned that infections in Canada could be higher by the beginning of the new year unless the spread is slowed.

Trudeau, meanwhile, urged Canadians to “hunker down in the coming weeks.”

Ontario reported its highest single-day count since late April with over 4,380 new COVID cases on Wednesday, pushing their provincial total to more than 661,500.

In Quebec, cases of COVID-19 are rising “exponentially” according to Premier Francois Legault Wednesday.

About 6,361 new cases of COVID-19 were officially recorded on Wednesday, though Legault said that the province had recorded about 9,000 new cases, some of which would be added to Thursday’s official total.

“In the past week, the number of COVID cases has tripled. We have today about 9,000 new cases, and we expect hospitalizations to continue to increase,” said Legault in a press conference.

“Our goal remains the same: to protect our hospitals so that we can continue to treat all those who need it.”

In the Prairies, case counts have also drastically increased.

Alberta confirmed over 1,300 new cases of COVID-19, of which 522 were confirmed to be the Omicron variant.

Officials in Saskatchewan added 105 more cases of COVID-19 on Wednesday, as well as one more death.

Provinces in Atlantic Canada have also seen a record-shattering week for their case counts.

Nova Scotia broke its daily case count record for the seventh day in a row on Wednesday with 537 new cases. New Brunswick added a record 237 new cases on Wednesday — the highest since the pandemic began.

Newfoundland and Labrador added another 60 cases on Wednesday, while P.E.I. posted its highest single-day increase with 33 new cases.