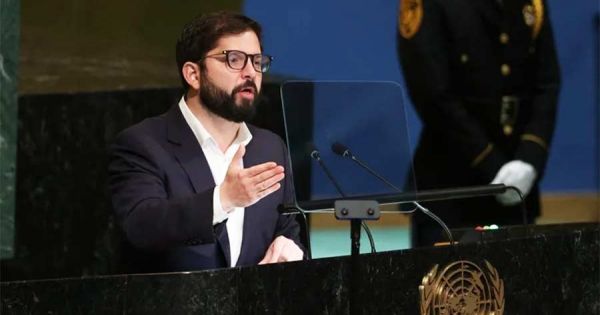 Chilean President Gabriel Boric Font Tuesday told the United Nations General Assembly (UNGA) in New York that his country would have a new Constitution “shortly” after the Sept. 7 attempt to get a progressive text approved through a referendum failed to get past the vote of the citizenry.

Boric told dignitaries from the world over that he was taking with his eyes and heart wide open the message of the people, but added that he was confident that a new Magna Carta guaranteeing change with stability would be approved soon.

The South American leader insisted that no country was exempt from mobilizations such as those that occurred during the social outburst of 2019. Those mobilizations, where serious episodes of violence and uncontrolled repression by security forces also occurred, were the beginning of an intense political process that continues to this day, an example of a malaise and a weariness that has perplexed many observers.

From that angle, Boric urged other governments to anticipate discontent and seek greater social justice in their own countries. As a result of that conflict, Chilean politicians came up with a commitment to lay the foundations of a new social contract and the people overwhelmingly supported the creation of a Constitutional Convention, which produced a document too progressive for its own good.

Boric admitted voters rejected the draft in a clear way and has pointed out that, although he was in favor of approval he does not take defeat at the referendum as his own failure. A government can never feel defeated when the people pronounce themselves, he said. It is time to look for new formulas to build new common ground, Boric offered other political forces in his country.

The president also reckoned the referendum’s outcome had taught him to be more humble.

He also addressed current world events saying from the climate emergency to the unjust war in Ukraine, which is a cause of global destabilization, as much as the trade war between the United States and Russia or the COVID-19 pandemic.

Boric also underlined the crisis of Venezuelan migrants in South America and called for the release of Nicaragua’s political prisoners. The South American leader, who earlier this week refused to receive the credentials of Israel’s new Ambassador to Santiago, called the international community not to naturalize the permanent violations of human rights of the Palestinian people while admitting Israel’s legitimate right to live within secure borders.