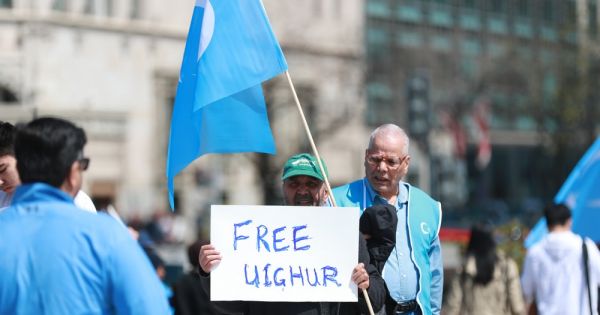 While the Winter Olympic Games are set to commence Friday in Beijing, the Government of China has reportedly reached an unwritten understanding with the Office of the United Nation’s High Commissioner for Human Rights to postpone the release of a document detailing the findings regarding abuses against the Uyghur Muslim minority in the northwest region of Xinjiang.

The UN Office headed by former Chilean President Michelle Bachelet reportedly agreed to a request from Chinese President Xi Jinping in that regard, the South China Morning Post (SCMP) said.

Despite a diplomatic boycott from the United States and various Western allies citing human rights violations, Xi Jinping is determined to present to the world the best possible image of his country.

The SCMP newspaper spoke of an agreement to delay the publication of the long-awaited report, which required almost three years of preparation and had toi work through numerous hindrances from Chinese authorities.

Liz Throssell, a spokeswoman for Bachelet’s Office, has said there was no date for the report’s release, but confirmed that it will not be ready before the start of the Winter Olympics, despite versions that it is already finished and ready for release. The Games end Feb. 20. However, Throssell confirmed there were ongoing talks for Bachelet to visit northwestern China possibly in the first half of 2022.

Reinhard Bütikofer, head of the European Parliament’s delegation to China, said that now that the world’s attention is focused on Beijing for the Winter Games, we cannot allow the Chinese government to whitewash its reputation in the face of the atrocities taking place in Xinjiang.

Last December, a bipartisan group of US lawmakers reminded Bachelet that her office had promised in September that the publication of the report would be imminent.

The Chinese Government has reportedly insisted that Bachelet’s visit to Xinjiang should be of a friendly nature and not as a part of an investigation, to which the former Chilean leader replied that the conditions for such a trip should be set by the visiting delegation and not by the host country and insisted freedom of movement throughout the country should be guaranteed, as well as freedom of investigation, including access to all prisons, detention centers and places of interrogation, and the confidential and unsupervised contact with witnesses and other private persons.

European Union leaders have also rejected Beijing’s invitation to tour Xinjiang under the same conditions. Nabila Massrali, a spokeswoman for the European Union, said the bloc is seeking an independent, objective, impartial and transparent assessment. She also assured that the UN report would add to the existing information on widespread violations and abuses of human rights that occur in Xinjiang.

The Uyghurs live in the northwestern regions of the country, making up one of the 56 ethnic groups officially recognized by the Beijing government. They present their own language, with different dialects that are differentiated by geographical sections. They have suffered from extensive controls and restrictions on their religious, cultural and social life and the Xi Jinping regime extended its surveillance to control both their beliefs and their religion.

More than 120,000 Uyghurs are said to be confined in detention camps throughout China, with the idea of changing their political thinking and religious beliefs using physical and verbal abuse, as well as forcing them to write self-critical essays and sing the anthem of the Chinese Communist Party.