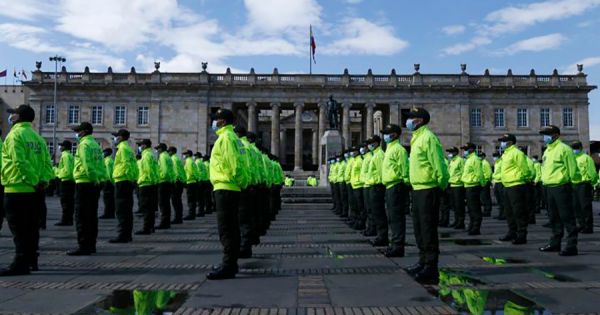 Opposition parties in Colombia have raised their voices Wednesday against the Security bill passed Tuesday by the Senate because while it claims to guarantee citizen security, it violates the Constitution, criminalizes social protest, and hands out licenses to kill. The bill is now up to President Iván Duque for enactment.

Senator Aída Avella said the rule was unconstitutional and against the principle that Colombia is a social state of law, while it also redefines the concept of proportionality for the sake of licensing to kill, thereby placing private property above human life.

Avella also denounced that the new norm would modify the current legislation so that the presumption of innocence and legitimate defense exists in advance in any circumstance involving a member of the public force.

The lawmaker told the Senate’s plenum that the bill was an insult against social mobilization, against young people, against human rights, and life.

The bill was proposed by the Ministers of Justice, Interior, and Defense, citing the need for strengthening citizen security

Senator Iván Cepeda of the Democratic Pole said that what was approved was a compendium of provisions that legalize official, paramilitary and private criminal practices … It is a license to kill, a new aberration of the government’s fascist court.

About twenty lawmakers have sent a letter to the Inter-American Commission on Human Rights (IACHR) to verify the failure of the Government to comply with its recommendations regarding respect for social protest.

The Colombian legislators also sent a separate note to US Representatives Patrick Leahy, Jim McGovern, and Alexandria Ocasio-Cortez, so that this law is taken into account when approving funds for Colombia.

Cepeda also announced Wednesday in an interview that he would take the case with other lawmakers to the Constitutional Court because they believe this citizen security law creates conditions to violate human rights. Cepeda also claims this bill deteriorates certain public liberties.

According to the Minister of the Interior, Daniel Palacios, the regulation seeks to give greater tools to judges to punish violent people. The bill also increases penalties from 50 to 58 years and three months in jail for aggravated homicide by a public servant regardless of whether active or retired, a journalist, a judge, a human rights defender, or a member of a political or religious organization.

Penalties for damages against public infrastructure or transport units range between 4 and 12 years in prison while wearing masks or elements to hide their faces constitutes grounds for the penalties to be increased.

In the case of legitimate defense, criminal responsibility would be removed from anyone who assaults another with the supposed purpose of protecting his integrity. This would even apply to protect private property against violent entry to it, including cars.

Last week, the office of the UN High Commissioner for Human Rights announced it had verified 46 deaths during the National Strike, in 28 of which the perpetrators were members of the public force, and in at least ten of them they were members of the infamous Mobile Anti-Riot Squad (Esmad).