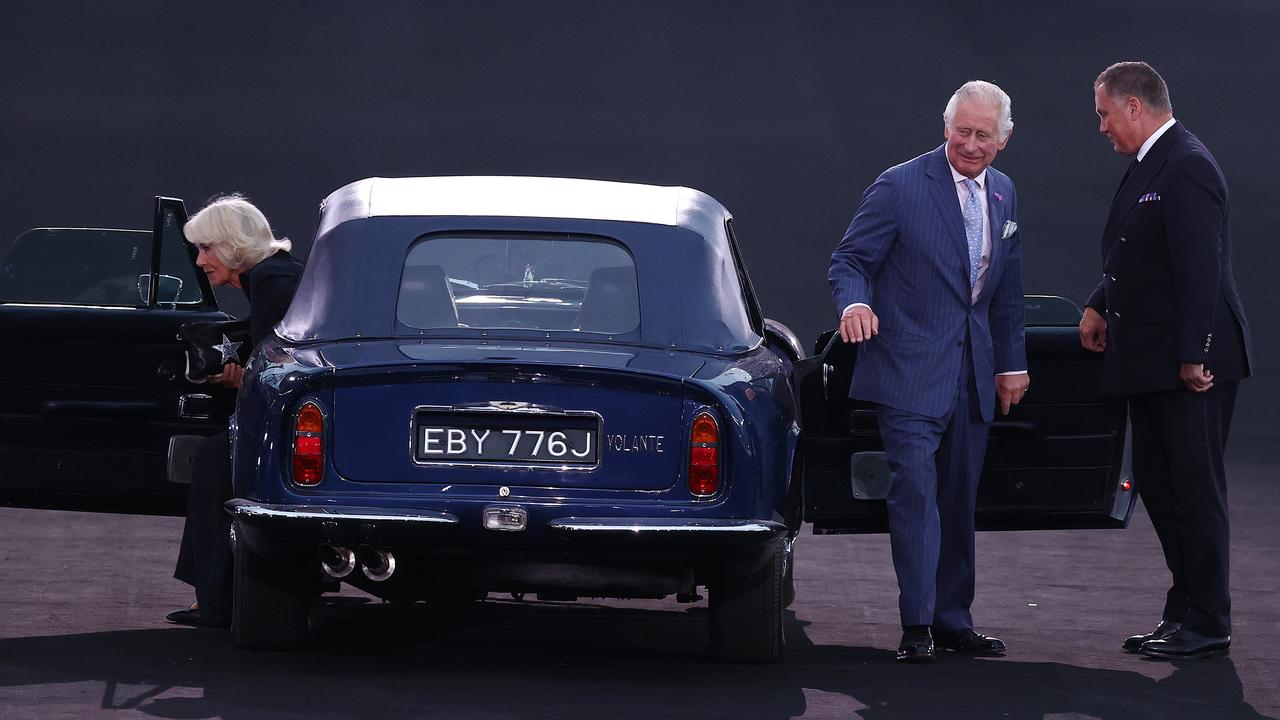 The Commonwealth Games are officially underway.

The sporting extravaganza is kicking off with an elaborate opening ceremony this morning, captivating locals and attracting interest from TV viewers around the world as Birmingham puts on a show.

Prince Charles arrived in style at the opening ceremony, driving the same Aston Martin the Duke and Duchess of Cambridge famously left Buckingham Palace in on their wedding day.

Charles and Camilla Parker Bowles, Duchess of Cornwall, arrived together at the Alexander Stadium — drawing comparisons to James Bond and his famous Aston Martin.

The Prince of Wales drove his luxury, vintage car out onto the arena before a display where several motor vehicles combined to form a perfect Union Jack on the arena surface.

Daily Mail royal editor Rebecca English tweeted: “The Prince of Wales has driven into the Opening Ceremony of @birminghamcg22 with The Duchess of Cornwall in his Aston Martin DB6 Volante. Bought in 1970, it runs on E85 bioethanol which uses a by-product from wine manufacture and the fermentation of whey from making cheese.”

Yousafzai was shot by the Taliban as a teenager and delivered an inspiring speech about how the city helped her and welcomed her family.

“Birmingham, when I first came to this city I had never heard its name. But I would come to understand it through the doctors and nurses at the Queen Elizabeth Hospital. Through the teachers who inspired me at school, helped my mother to learn English, and taught my little brothers to drive,” she said.

“Through the beautiful library of Birmingham, through the friends I have made, from my best friend Ellen, a lifelong Brummie, to the families who have come here from Zimbabwe, Hong Kong, Pakistan, and beyond.

“Tonight teams from 72 countries and territories join the people of Birmingham to celebrate friendship across borders. The young athletes who will compete over the next two weeks represent millions of girls and boys across the Commonwealth.

“Our shared hope for the future. A future where every child can go to school. Where women can fully participate in society. Where families can live in peace and indeed in dignity.

“Over the next weeks as we watching credible athletes of the Commonwealth Games remember that every child deserves the chance to reach their full potential and pursue their wildest dreams. And now it is my honour to say, welcome to Birmingham! Thank you.”

The ceremony celebrated aspects of Birmingham’s history and culture — which explains why a giant bull waltzed into the stadium at one point. The Bull Ring is a major shopping district in the city, which also features a sculpture of a bull, while the mascot for these Commonwealth Games is Perry the Bull.

When the teams started making their entrance into the arena, Australia was first out of the gates, led by history-making flag bearers Eddie Ockenden and Rachael Grinham.

More than 5000 athletes are primed for action in Birmingham at a Commonwealth Games lacking several track and field stars but still boasting elite performers.

Competitors from 72 nations and territories will be vying for medals in 19 sports over a jam-packed 11 days in the Midlands.

Away from the marquee athletics and swimming events, women’s Twenty20 cricket makes its debut and 3×3 basketball will feature for the first time while sedate lawn bowls is a fixture.

There is also an integrated para sports program in some events.

The Games, held every four years, are often criticised as a quirky sporting relic but launched in style at the opening ceremony, headlined by 1980s pop band Duran Duran, formed in Birmingham.

Australia have topped the medals table at every Games since 1990 except in 2014, when England finished top in Glasgow — the last time the event was held on British soil.

In the pool, Emma McKeon, Ariarne Titmus, Kaylee McKeown and teenage sensation Mollie O’Callaghan will lead the charge for a star-studded Australian team.

Double Olympic champion Titmus, 21, opted out of the recent world championships in Budapest to keep herself fresh for Birmingham.

“I am so excited and I think we’ve got a great team going in. It’s insane the depth we have,” said the Commonwealth Games 400 metres and 800m freestyle champion.

Headlining for England will be breaststroke superstar Adam Peaty, who missed the recent world championships with a foot injury.

The Commonwealth Games comes hot on the heels of the world athletics championships in Eugene, Oregon, which only finished earlier this week.

The worlds were rescheduled from last year after the coronavirus pandemic forced a delay to the Tokyo 2020 Olympics but that has created a headache for athletes in a crowded schedule.

Chopra, who won javelin gold for India in Tokyo last year, said he was “hurt” at not being able to defend his Commonwealth title after suffering a groin strain during the world championships, where he won silver.

There are major doubts over the participation of Jamaican sprint trio Shelly-Ann Fraser-Pryce, Shericka Jackson and Elaine Thompson-Herah, who swept the 100m podium in Oregon.

Jackson, who previously suggested she would be competing in Birmingham, followed up her 100m silver at the worlds by running the second-fastest time in history in the 200m.

In another blow, British sprinter Dina Asher-Smith announced on Wednesday she had withdrawn from the England team due to a hamstring injury she sustained in Oregon “due to the short turnaround”.

But there will still be star power at the Alexander Stadium, with Australian high jumper Eleanor Patterson and javelin thrower Kelsey-Lee Barber arriving as newly minted world champions.

Jake Wightman, who shocked Norway’s Jakob Ingebrigtsen to win 1500m gold in the United States, will be one of big draws for home fans in the absence of Asher-Smith, with Scottish Olympic silver medallist Laura Muir another major name.

Cricket last featured at the Commonwealth Games in 1998 but the women will take part for the first time in Birmingham, with Meg Lanning’s Australia hot favourites to win the T20 competition.