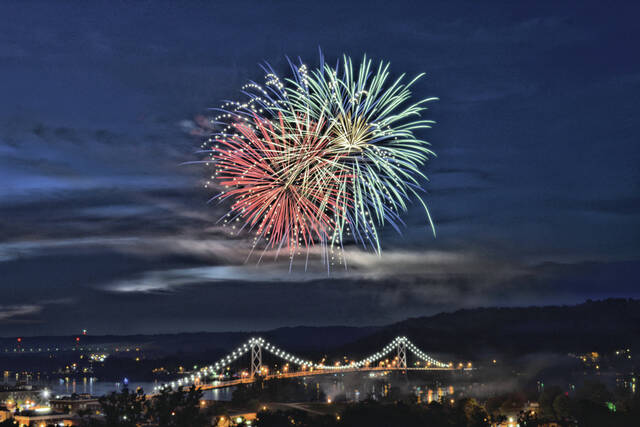 Independence Day is just around the corner and communities in the area are gearing up to celebrate the day with many events.

All across the U.S. people commemorate the Fourth of July each year to mark the passage of the Declaration of Independence by the Continental Congress on July 4, 1776.

In Maysville, there is a full day of fun scheduled to begin at 8 a.m. on Monday, July 4, and ending with a fireworks show at 10 p.m.

First, there will be a 5k run/two mile walk at 8 a.m. beginning at Limestone Landing; with check-in starting at 6:30 a.m. Then on the Second Street Mall at 3 p.m. there will be the Little Miss and Mister Firecracker followed by the Green Dot Pet Pageant at 4 p.m.

In Rotary Park, beginning at 4 p.m there will be inflatables, hot dogs and other treats provided by the VFW then food, music and vendors at Limestone Park with a live rhythm and soul band at 5 p.m.

There will be a bicycle decorating contest at 6 p.m in Rotary Park with the top two winners each receiving a free bike provided by McRoberts Furniture store.

Line-up for the Fourth of July parade is at 6:30 p.m. under the train trestle; then after the parade, there will be a concert with music by the Chuck Taylors in Limestone Park at 8 p.m. The day will end with the fireworks show at 10 p.m.

In Augusta, there are two days of celebrating planned on Friday, July 1 and Saturday, July 2.

On July 1 from 4-7 p.m. in Campbell Park there will be a farmers market; at the Augusta Boat Dock beginning at 5 p.m. both days, there will be a fish fry, inflatables, bingo and Massey’s Concessions with fireworks at 10 p.m. on Saturday.

There will be music and vendors at West Riverside Drive and Caboose from 10 a.m. to 5 p.m. on July 2; at 11 a.m. on Main Street there will be the Patriotic Bicycle and Golf Cart parade;

In Vanceburg, there are also two days of celebrating planned with several big events on July 1 and July 2.

On July 1, the celebration begins at 6 p.m. with a parade line-up at L.C. Central School, the parade begins at 7 p.m.; there will be a $1,500 cash prize at the Cruise In this year which begins at 6 p.m.; live music at 7 p.m. at Veterans Memorial Park as well as Darrell Armstrong in the Baptist Church Parking lot at 7 p.m.who will be followed by Hunter Jordan closing out the music at 10 p.m.

Saturday, July 2, will have events such as the 5k Red, White and Blue Color Run beginning at 8 a.m. at the Trace Creek parking lot; registration is at 7 a.m.

Throughout the day there will be basketball tournaments and baby shows as well as music, games, talent shows, bicycle and power wheels races and fireworks and more music to finish the day at 10:30 p.m.

A long-time tradition will carry on in Ripley July 2-3, as the Ripley Lions Club will once again host its annual Fourth of July festival and fireworks show.

The official festival kicks off at 8 a.m. on Saturday, July 2 at the Ripley Lions Club shelter on lower Front Street with the Youth Fishing Tournament for kids 15 and under.

The baby show contest will be held at 9 a.m. and there will be a chili cook-off, registration and competition beginning at noon.

A decorated bike contest (most patriotic) and Bike Parade will be held at 1 p.m.

The youth corn-hole tournament for those 18 and under begins at 2 p.m. followed by the pie-cake registration and competition at 3 p.m. and the pie-cake auction at 3:30 p.m.

There will be an open/adult corn-hole competition at 4 p.m.

The band Misunderstood will perform at 7 p.m. with the fireworks show scheduled for 10 p.m. and the festival closes at 11 p.m.

There will be a talent show competition held at 3:30 p.m. and a duck race takes place at 6 p.m., then Harry Pedigo Band will perform at 7 p.m.

All attendees are encouraged to check their counties specific rain dates for firework events.