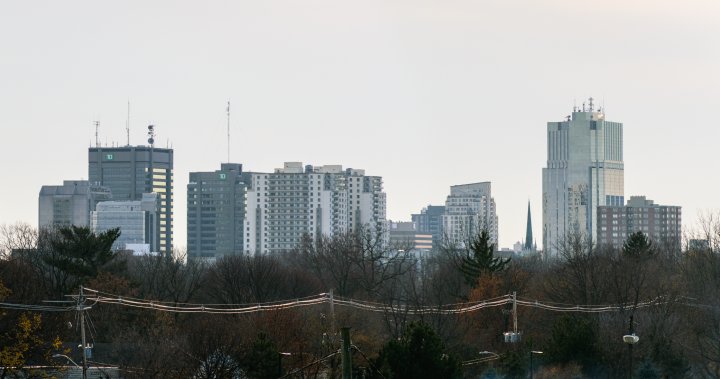 Officials with the Middlesex-London Health Unit have confirmed the presence of the new Omicron variant in the region, detected in a large cluster of COVID-19 cases.

The health unit reported the large cluster of COVID-19 cases on Monday, linked to two individuals who had arrived in London, Ont., from Nigeria in late November.

On Tuesday, the health unit announced that genomic sequencing conducted on one of the cluster cases had confirmed the presence of the Omicron variant.

As of Tuesday afternoon, the health unit says the number of cases associated with the COVID-19 cluster is at least 40, with 171 high-risk close contacts.

Omicron likely involved in cluster of at least 30 COVID-19 cases in London: MLHU

It remains to be seen whether all 40 cases are confirmed to involve the Omicron variant, however, the health unit said on Monday that the likelihood of it being an Omicron cluster was “very high.”

“I can’t really comment on the size of the other clusters that may be happening outside of my jurisdiction, but as far as I know this is certainly one of the largest that I’ve heard reported,” said Acting Medical Officer of Health Dr. Alex Summers.

Although genome sequencing is underway on the other cases associated with the cluster, Summers noted that “the single confirmed result that we have received is enough for us to move forward like we have been.”

“Any additional whole genome sequencing results isn’t going to change our actions with this cluster… Now that we have that one result, we can be confident we’re dealing with an Omicron situation,” he said.

Health officials said previously that many of the individuals associated with the cluster were fully vaccinated, including the travellers, who also followed federal guidelines around testing.

The Omicron variant was first identified in South Africa and declared “of concern” by the World Health Organization, but study is ongoing to determine whether it is actually more transmissible or more resistant to vaccines. Questions also remain about whether it causes milder or harsher symptoms.

Summers said that, to the health unit’s knowledge, none of those linked to the cluster had been hospitalized to date.

“Obviously, this is still a very early and evolving situation. We hope to provide more comprehensive information at Thursday’s media briefing,” he said.

The health unit believes that the number of cases linked with the cluster will grow, and Summers notes that it comes amid an increase COVID-19 cases locally over the last two weeks, driven by the Delta variant.

The region’s rolling seven-day case average stood at 34.3 as of Monday, up from 17.4 a week earlier and 15.3 two weeks earlier. The health unit reported 40 cases each on Dec. 2 and 3, the highest single-day increase since August.

On Monday, the LDCSB announced that the three schools would be closing effective immediately “due to the number of students and staff quarantining” in connection with the cluster.

The health unit’s COVID-19 dashboard on Tuesday showed five active COVID-19 cases at St. Marguerite, three at St. Nicholas, and two at St. Mary Choir & Orchestra, however its not known if the cases are associated with the cluster.

The dashboard does not list variant data for school cases. Outbreak declarations are currently active at St. Marguerite and St. Mary Choir & Orchestra.

The Thames Valley District School Board (TVDSB) said on Monday that Princess Elizabeth Public School in London and Delaware Public School in Delaware had “identified close contact cases,” but would remain open.

“All individuals affected are isolating, and all appropriate public health follow-up is underway,” read a statement from TVDSB.

The cluster has also been linked to local child-care centres, and to an outbreak at God’s Favourite House, a church on Dearness Drive in south London.

Health officials have not released information about the child-care centres that have been linked to the potential Omicron cluster.

On Wednesday, two local child-care centres were listed on the health unit’s dashboard as having active COVID-19 cases, however Summers could not say whether they were the centres connected with the cluster.

“We’re just confirming and communicating with some of those child-care centres, so I can’t confirm those locations yet today,” Summers said, adding confirmation may come Wednesday.

Health officials say any COVID-19 cases or high-risk close contacts associated with the cluster are considered persons under investigation, or PUIs, for Omicron.

The health unit notes it is continuing to follow up with PUIs as well as close contacts, and says anyone contacted by case investigators with the health unit should follow their direction and guidance.

Members of the community are asked to monitor themselves for signs and symptoms of COVID-19 and to seek testing immediately if any develop.

Ontario’s pandemic advisers released modelling Tuesday showing that the province could see close to 400 COVID-19 patients in intensive care and possibly 3,000 new infections reported daily by mid-January, even without accounting for the new Omicron variant, which they warn could have a “substantial” impact.

The group called for increased vaccination and public health measures to reduce transmission, while Ontario’s top doctor maintained that more data is needed before deciding whether to bring in province-wide measures to contain spread.

On Monday, provincial health officials said it could take months to assess the Omicron variant’s impact on the province’s plan to ease pandemic restrictions. The province had planned to loosen rules on vaccine certificates in some settings as early as Jan. 17.

“We’re planning to start lifting things but if this Omicron variant circulates widely, and if it’s a virulent as it has been in other jurisdictions, we are going to need to take a look at that,” said Health Minister Christine Elliott.”

“But right now, we don’t have the pertinent information that we need in order to make a decision. I anticipate that will become evident over the next several months as we see what happens in South Africa and other jurisdictions.”

— with files from Jacquelyn LeBel and The Canadian Press