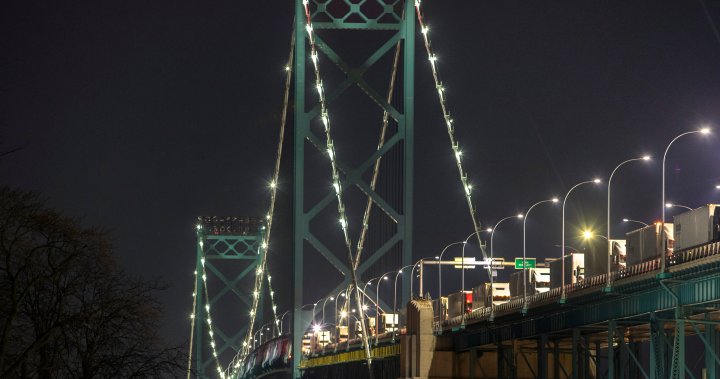 Requiring COVID-19 vaccines for truck drivers crossing the border into Canada is the “right thing to do,” says Health Minister Jean-Yves Duclos as a new vaccine mandate kicks into effect.

Unvaccinated foreign national truck drivers are not allowed to cross the border into Canada as of midnight Saturday, while unvaccinated Canadian truck drivers still have a right of return, but must test and isolate for 14 days. The U.S. will also tighten its border restrictions a week later on Jan. 22.

At that point, Canadian truckers will be denied entry to the States unless they’re fully vaccinated.

“That has been known for many months, and truckers in very large numbers have chosen to be vaccinated. That’s the right thing to do, not only to protect themselves, obviously, but also to protect their businesses and the industry,” said Duclos in an interview with The West Block‘s Mercedes Stephenson.

“We know that protecting against COVID-19 is not only the best health measure, but the best economic policy measure to apply to go through this crisis and to end it.”

Duclos’ comments followed a week that saw federal officials forced to clarify intentions around the policy after an official at the Canada Border Services Agency told reporters that the vaccine mandate set to kick in for truck drivers was being reversed.

A joint statement from federal ministers including Duclos on Thursday said the CBSA’s information had been sent “in error,” which Duclos acknowledged was “confusing.”

“The federal government has a responsibility to look after borders. We need to secure our borders in this emergency context, where there is a lot of Omicron traveling not only inside Canada, but outside of Canada,” he told Stephenson.

Federal health officials warned on Friday the country is facing an “intense” several weeks as the highly-contagious Omicron variant continues to surge across Canada, spiking case counts to record highs in many regions and prompting leaders to weigh further lockdowns.

“While Canada could see a sharp peak and decline in cases in the coming weeks, given disease activity far exceeding previous peaks, even the downside of this curve will be considerable,” Tam said.

“With several weeks of very intense activity expected to come, we need to do our best now to limit the size and impact of the Omicron surge in order to maintain the health system and critical functions of society.”

The variant was first identified by South African scientists in November, and the World Health Organization has warned that although some studies have suggested it may be less severe than the Delta variant, it is not accurate to call the Omicron variant “mild.”

Will the next COVID-19 variant be worse?

Dr. Peter Singer is a special adviser to the director-general of the WHO, and joined Stephenson to talk about the progression of the Omicron variant around the world.

“Omicron is a wake-up call — as though we needed another wake-up call — that we have to vaccinate the world. It’s really one of the best ways to keep Canadians safe,” Singer said.

Wealthy countries including Canada have repeatedly been accused of not sharing enough COVID-19 vaccines with less-wealthy countries, many of which have struggled to vaccinate their most vulnerable and their health-care workers even as wealthier countries roll out booster doses.

Singer stressed that until more countries are able to vaccinate larger portions of their populations, the world will continue to see the emergence of new — and potentially more dangerous — variants.

“If we keep doing what we’re doing, unfortunately, it is possible — even likely — that there will be another variant and we won’t be ending the pandemic,” he said

“In terms of what those future variants will be like, it’s very hard to know that in terms of transmissibility, in terms of virulence. But it’s certainly possible that the next one — the next letter in the Greek alphabet, by the way, is Pi —  that Pi could be worse than Omicron.

“That’s why it’s so important for us to act.”