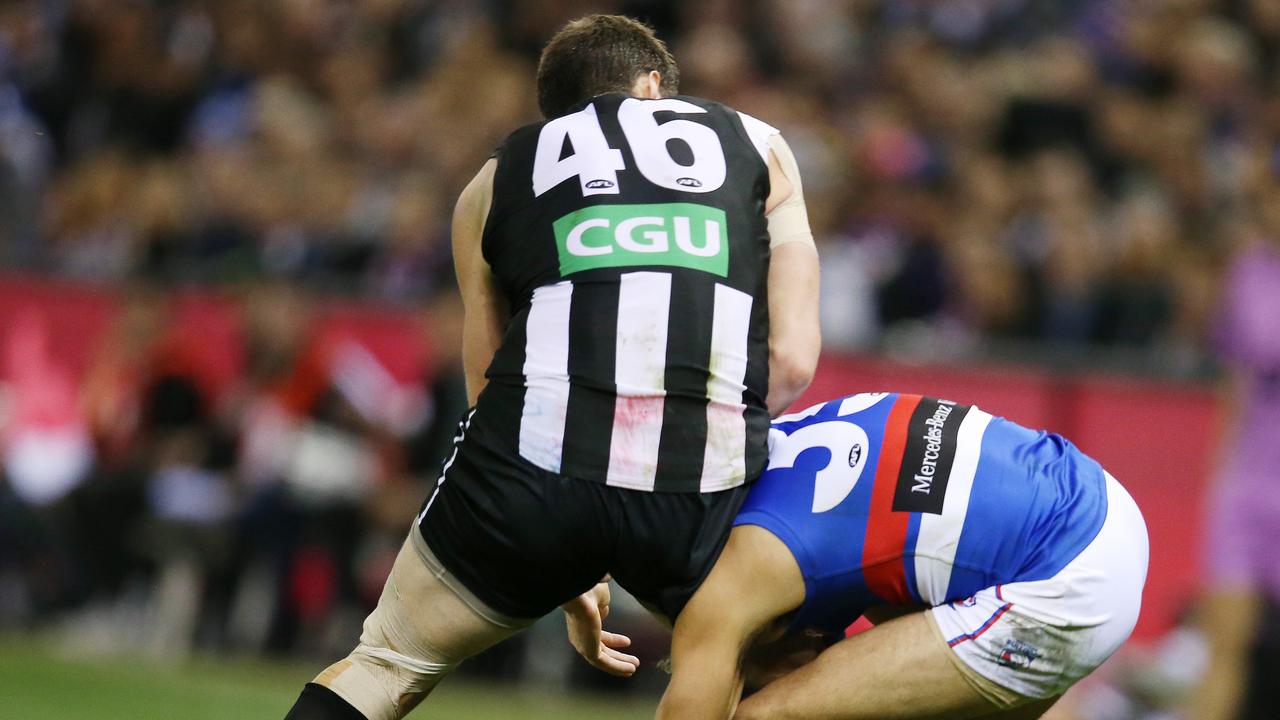 Players who choose to bump are almost certain to be suspended if they make contact with the head as the AFL tightens its rules amid heightened concussion scrutiny.

The AFL has followed through on its pledge to crackdown on head-high hits as it moves to also further protect umpires in the wake of Toby Greene’s bump on Matt Stevic.

With concussion becoming an increasing problem in the game, the league has written into the rules that the potential to cause injury must be used to determine the level of impact of any head-high hit.

It means players will almost certainly be suspended more often for dangerous high bumps, with the impact grading usually starting at medium or higher rather than low.

The lack of injury to an opponent will no longer spare the player from a tougher grading, bringing the rule in line with how striking charges are treated.

Speaking outside AFL House in November, the league’s new football boss Brad Scott warned stricter rules were on the way.

“In most instances, there is a player who is late to that contest,” Scott said.

“If you’re late and you hit the player in the head, you’re going to be in trouble. There’s broad acceptance of that among the clubs.”

Giants superstar Greene’s infamous shoulder bump on Stevic in his club’s narrow finals victory over Sydney in August cost him a six-match ban after the AFL appealed a softer penalty.

But the ramifications have extended to new match review rules around intentional umpire contact.

The AFL now requires tribunal members to note all elements of an offence, whether aggressive, forceful, demonstrative and/or disrespectful.

In simple terms: the more elements present in an incident, the stronger likelihood there will be of a harsher sanction.

Previously, if umpire contact was found to be aggressive, forceful, demonstrative or disrespectful, the act was deemed intentional and sent directly to the tribunal without guidance on a penalty.

Players may also be fined for careless contact with an umpire if they push or hold – the latter in addition to pushing – an opponent into an umpire or their direct path.

The tribunal structure has also been changed, so that a chairperson and two tribunal jury members will determine a decision.

Jeff Gleeson QC is the new tribunal chairperson, with Renee Enbom his deputy. Enbom will chair AFLW tribunal hearings for the upcoming season.

The AFL tribunal previously comprised a chairperson and a three-member jury of former players.

AFL and AFLW Tribunal amendments for 2022

Successful Tribunal: $5000 will be refunded

Successful Tribunal: $10,000 will be refunded