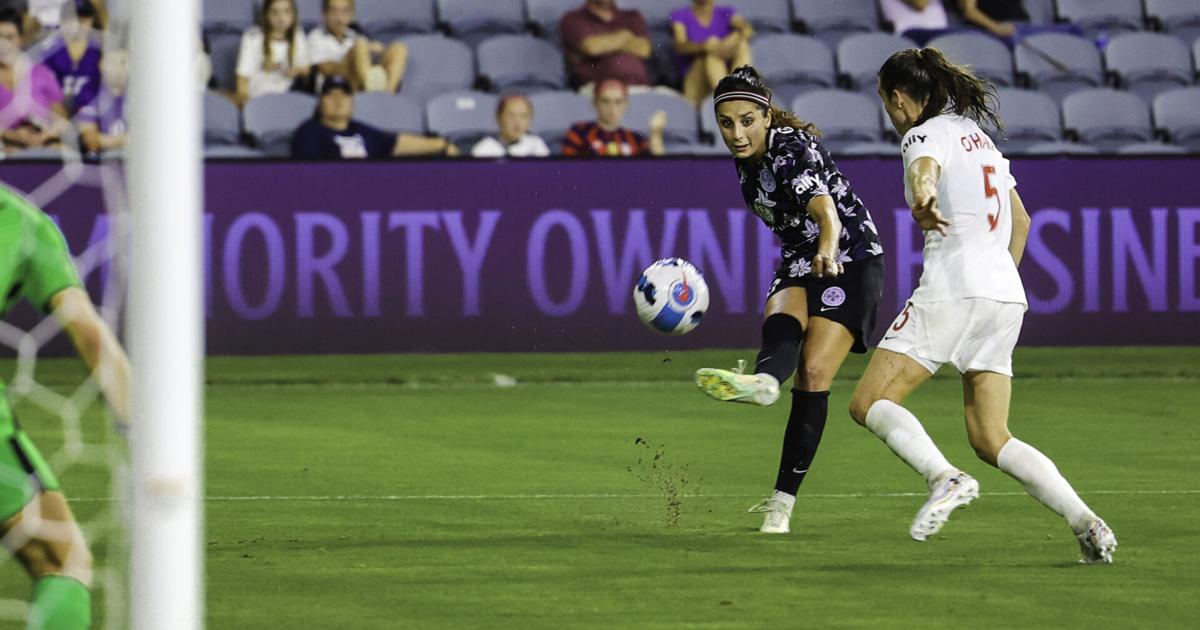 LOUISVILLE, Ky. (WDRB) – Covering sports in Louisville used to be a simple matter. You had Louisville men’s basketball, some football, and everything else. Sprinkle in some minor league baseball in the summer, some high school sports, and you were good.

Today, that is not the case. I find myself feeling as if I need to apologize to certain teams or fan bases, because they deserve more than I can provide. Either I’m slower, or the world got faster. I should’ve covered Louisville’s volleyball team more last season. Louisville baseball is a national program. Women’s basketball too. I could easily cover one or both of the pro soccer teams in Louisville full-time and have no shortage of stories.

Racing Louisville FC is at the top of the list of teams that deserve more. That might sound strange for a franchise that has drawn 5 of its past 7 games and hasn’t won since May 22. But sometimes the results don’t tell the whole story.

Friday night in Lynn Family Stadium, the home team to fought to another draw, 1-1, against the Washington Spirit. It was a meeting of two teams sitting at ninth and tenth, respectively, in the NWSL table looking to keep their playoff hopes alive. Only the top 6 make it, and the tie helped neither team toward that effort.

Racing can’t catch a break – and that often happens with expansion teams. Even when they sign a top international talent like Thembi Kgatlana of South Africa, she ruptures an Achilles’ within days and is lost for the season.

“I think we deserved 3 points today,” Racing coach Kim Björkegren said after Friday’s draw. “We created enough chances (10 shots in the box to Washington’s 5) and I think we were a little bit unlucky on their goal.”

Racing took its first lead since July 2 when Nadia Nadim took a pass from Kirsten Davis – off a pass ahead from Julia Lester. Nadim took two touches to her left then fired a low left-footed shot past the keeper just inside the post.

But Washington drew even 12 minutes later when Jordan Baggett appeared to slap a ball down in a duel, but somehow didn’t get whistled. She passed to Ashley Hatch, who sent a low shot through 4 Racing defenders – glancing off the foot of one of them in the process – before finding its way into the back of the net past Louisville keeper Katie Lund.

“It’s a little bit similar, more or less, to the whole season, that we deserve a little bit more than we get right now,” Björkegren said. “But today we had a better performance than we did in the previous game against Seattle.”

Racing created multiple opportunities late. A Gemma Bonner score off a corner was flagged offsides. Nadim had a shot saved in the 82nd minute and a Jess McDonald cross into the box was headed just high by Nadim minutes later.

“Honestly, I think it’s nice finally to hold 90 minutes, even though I was dying at the end,” Nadim said. “But unfortunately not good enough. I think 1-1 was very disappointing. Especially the first half we played a good game. We had some good chances. Second half we get the goal, and yeah. I don’t know. I don’t know what to say. I’m just very disappointed right now. . . . That’s kind of the story of our season. We’re getting very close, but just the last thing, we lost concentration in both boxes. . . . I think the 2 last games we’ve been under enormous pressure and I think we’ve defended very well. I know it’s been a very tough week with 3 games in 8 days, but the positive is we can play up to the best teams in the league and be very close. Unfortunately, we’re not 100 percent there yet, because that’s what the results show. That’s what counts.”

“We can expect world quality from her,” Björkegren said of Nadim. “Even if she scored one goal I know she’s disappointed because she wants to help us to win games. But that’s life. And we have to be fair to her, she was playing her second 90-minute game in one year, something like that. We need to have that in our mind. She did good. She was, of course, tired in the end. But as a coach, when you have a quality player like that, you want to keep her on the pitch still.”

Björkegren subbed late, including inserting McDonald, to try to grab the win in the closing minutes. That much was at stake. He even made a tactical change, going from a 4-back formation to 3.

“I think that was a good move,” Nadim said. “The previous games I’ve been kind of alone on top and it’s hard to, even though when you win the headers or the ball you’re so far away. Now having someone like Kirsten who runs deep and does amazing runs, it helped a lot and that’s how we scored the goal. I’m very happy for her she had an amazing game, 2 games. Love to see her development. I think she’s going to be a great asset for us.”

What’s easy to lose about this team, as it works its way through a myriad of issues, are a couple of things.

While the players are highly frustrated, they are not negative. They are realistic about their performances, but not discouraged. And that’s a pretty unusual thing. They are keeping it together. Their effort and attitude don’t appear to waver.

The second thing that shouldn’t be lost is what happens after these home games. It’s a staple of professional sports, of course. Fans wait around for autographs. But after Racing games, the anticipation has a different feel. Fans will wait for a glimpse or an autograph even from visiting players – some of the best in the world – or from Racing’s players, whose stories they know, whose international experience they are familiar with.

The number of boys waiting for autographs after games is a neat thing. Last weekend, Racing drew its largest attendance of the season, 7,089, in a 2-1 loss to Portland. On Friday night, it drew 5,364.

No doubt, the attendance likely would be higher with a few more victories. But it still isn’t insignificant. Those moments matter, small though they may seem, in this city.

Björkegren is frank when assessing the playoff picture.

“If I think it’s going to be difficult to be top 6, I need to be honest and say, ‘Yes, it’s going to be difficult,’” he said. “It’s 7 games left and I think we need to win 6 of them. You never know. We talked about it. Kansas City (Current), for example, we think are a good team but we don’t think they are much better than us, and they have been unbeaten in 8 games. So that’s something we talked about. If we can just get over the hill and start to win, there could be another one and another one and another one. But, of course, in this league to win 6 of 7, it’s tough.”

In the meantime, the franchise presses on for a breakthrough it believes is coming.