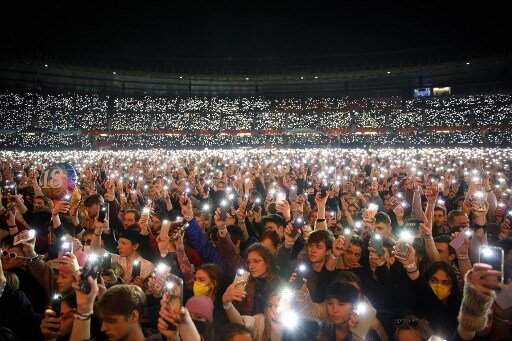 Countries big and small across Europe have been taking in millions of refugees from Ukraine fleeing from the ongoing Russian invasion. One of those is Croatia, with a population of more than four million, which according to local news reports, has seen thousands cross its border.

Croatian Minister of Foreign and European Affairs Gordan Grlić Radman said: “Croatia has taken in more than 600 Ukrainian refugees, and it would not have trouble accepting even hundreds of thousands of refugees.”

To cope with expected bigger numbers, the country’s Civil Protection Directorate, has issued a leaflet in Croatian and Ukrainian, to be handed at border crossings to refugees.

Under normal circumstances Ukrainian nationals entering the country would need a biometric or non-biometric passport and visa, but the Croatian government has waived these restrictions.

Vesna Fricki, who works in the justice department in Zagreb, said: “Ukrainians have always been welcomed in Croatia, whether they came to work or visited us as tourists. A few days after the aggression, the first refugees arrived.

“As of March 10, 4,000 people, mostly mothers and children, have come here. Croatia is ready to provide them not only with accommodation, but also health care, and to offer jobs for them, and education for children. Last week the first pupils jointed the Croatian schools, and a father of five got a job.”

Croatian National Television was saying the figure by Thursday, March 17, for Ukrainian refugees had grown to 7,200. Meanwhile, Slavonsiki Brod, an online newspaper, reported that the government is planning to take up to 17,000 refugees, who will be housed in hotels, hostels and dormitories across the country.

Prime Minister Andrej Plenković said in the Croatian parliament earlier this month that this was “a war between David and Goliath in which Russia is attacking the 28 times smaller Ukraine,” adding that Russia is the aggressor and Ukraine the victim.

Mr Plenković said the war in Ukraine brought back memories of Croatia’s Homeland War. “All those images revive in Croatia painful memories of the Milošević regime’s Great Serbian aggression and the horrors of war that we went through.”

He congratulated Croatian MPs on the unanimous condemnation of Russia and solidarity with Ukraine, saying he was pleased that the parliamentary majority and the opposition are “on the right side of justice and freedom.”

Present at the parliamentary debate were Ukrainian Ambassador Vasyl Kyrylych and members of the Ukrainian community. The Ukrainian flag was also displayed. Mr Plenković said the future of Europe depended on the fate of Kyiv, condemning Russia’s aggression in the strongest terms and commending the Ukrainian army and people for their heroic resistance.

Ms Fricki said her sympathy for refugees was also rooted in the experiences of her own family. Her father’s grandfather came to the Slavonia region of Croatia in 1904 when Ukraine  was part of the Austro-Hungarian Empire. At the time due to agricultural reforms, many lost their fields or were encouraged to migrate to less populated areas in the south of the monarchy.

Ms Fricki first heard about Russia’s invasion by text from a friend from Western Ukraine. It brought back bad memories when the war cost Croatia an estimated 22,000 lives.

“All the time I was trying to repress these memories, thinking that nothing like this would ever happen again,” she said.

There are 23 Croatian nationals left in Ukraine, of whom 10 are married to Ukrainians and do not want to leave the country. Croatian Ambassador Anica Djamić has left Kyiv and will continue her duties in Lviv, Croatian Minister of Foreign and European Affairs, Grlić Radman said.