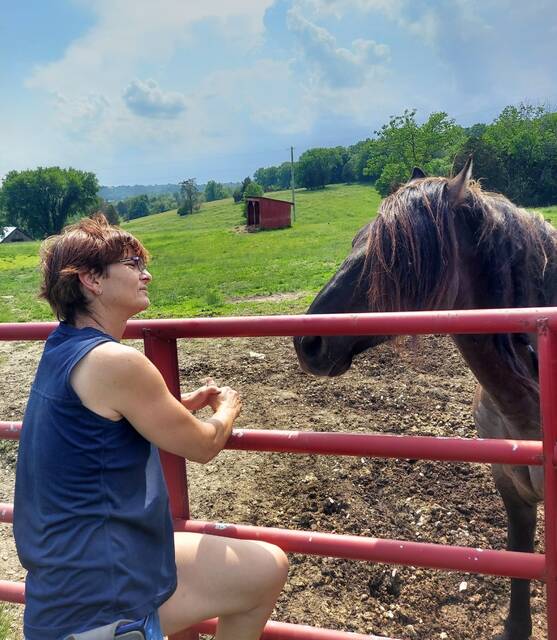 EWING — Prague’s rich history, Gothic cathedrals and medieval squares are a far cry from Kentucky’s rolling, wooded hills and small-town living, but after 22 years in the U.S., Ewing is where Noemi LaBlanc has put down roots.

“It’s beautiful here and the people are friendly,” LaBlanc said.

LeBlanc, who studied agricultural engineering at the Czech University of Agriculture in Prague, accepted an internship at Ohio State in 2000 to work with horses abroad. For the next few years, LeBlanc’s equestrian aspirations kept her involved in the thoroughbred industry and eventually took her to Lexington where she met her first Rocky Mountain saddle horse.

Despite its name, the breed was developed in the Appalachian Mountains of Kentucky and not the Rocky Mountains. Old Tobe arrived in Kentucky from the western states around 1890 and became known as the foundation stallion for the breed, although the Rocky Mountain Horse Association wasn’t officially formed until 2002. These horses can be any solid color but are known for their gorgeous chocolate brown coat color and flaxen mane and tail. They’re multi-purpose horses, used mainly for driving, trail riding and working cattle.

The Rocky Mountain horse, which is gaining popularity in the U.S., is extremely rare in Europe, and that’s how a hobby turned into a profitable business for LaBlanc.

Leblanc didn’t have any experience with Rocky Mountain horses until a friend invited her to take one for a spin.

“I knew nothing about the breed and didn’t understand a gaited horse, but a friend let me ride and I fell in love.”

Leblanc and her husband, Larry LaBlanc — a native of Louisianna — quickly purchased several Rocky Mountain horses that were shipped back to the Czech Republic to begin a breeding farm. But the couple were spending much of their time in the U.S., so they eventually decided to sell their Czech farm and settle permanently in Kentucky.

The LeBlancs knew they’d made the right choice when they found the perfect 150-acre property in Ewing to raise their top-quality horses and a herd of cattle. They named the farm Acadiana Stables.

Their Rocky Mountain herd is up to 25 horses with two stallions. The rest are an assortment of breeding mares, foals and riding horses.

“The market is so hot right now, I am raising more foals,” LeBlanc said.

LaBlanc explained that she sells most of her stock inside the U.S., but she also ships them overseas to customers in Europe. “It’s expensive but there aren’t many Rocky Mountain horses over there, so they sell well.”

When LaBlanc isn’t wrangling her horses, she’s a fromager.

“I started a business — Noni’s Garlic Dip and Spread — to make cheese when I couldn’t find something similar here.”

Garlic cheese spread is very popular in the Czech Republic and LeBlanc’s product is a special recipe from her homeland. She rents a commercial kitchen in Lexington where she produces and packages her cheese products. The spread is available at a variety of regional locations including, Truly Local in Morehead, Local 68 in Maysville, the Paris Farmer’s Market and Jungle Jim’s stores.

When asked about the differences between living in an ancient European city or rural Kentucky, she laughed. “America has a very different culture than Europe. I have learned to ask before going on other people’s property. Don’t trespass because people have guns here and they don’t in Europe.”

LeBlanc also compared the Cincinnati landscape to her homeland. “It is similar because of the hills around a river, like Prague. I like Cincinnati. If I were to move to an American city, I think it would be the place for me.”

But LeBlanc said that out of a family of intellectuals, where her father is a lawyer and her mother a doctor, she finds pleasure living in the country. “I’m not a city chick.”

LeBlanc said Kentucky is the perfect place to raise her smooth-going horses. And because of her cheese-making business, she gets a little taste of home on a daily basis.

If you’re interested in purchasing a Rocky Mountain horse or learning more about the breed, contact LeBlanc on Facebook at Acadiana Stables. You can also reach LeBlanc at [email protected] For cheese inquiries, you’ll find Noni’s Garlic Dip and Spread on Facebook.