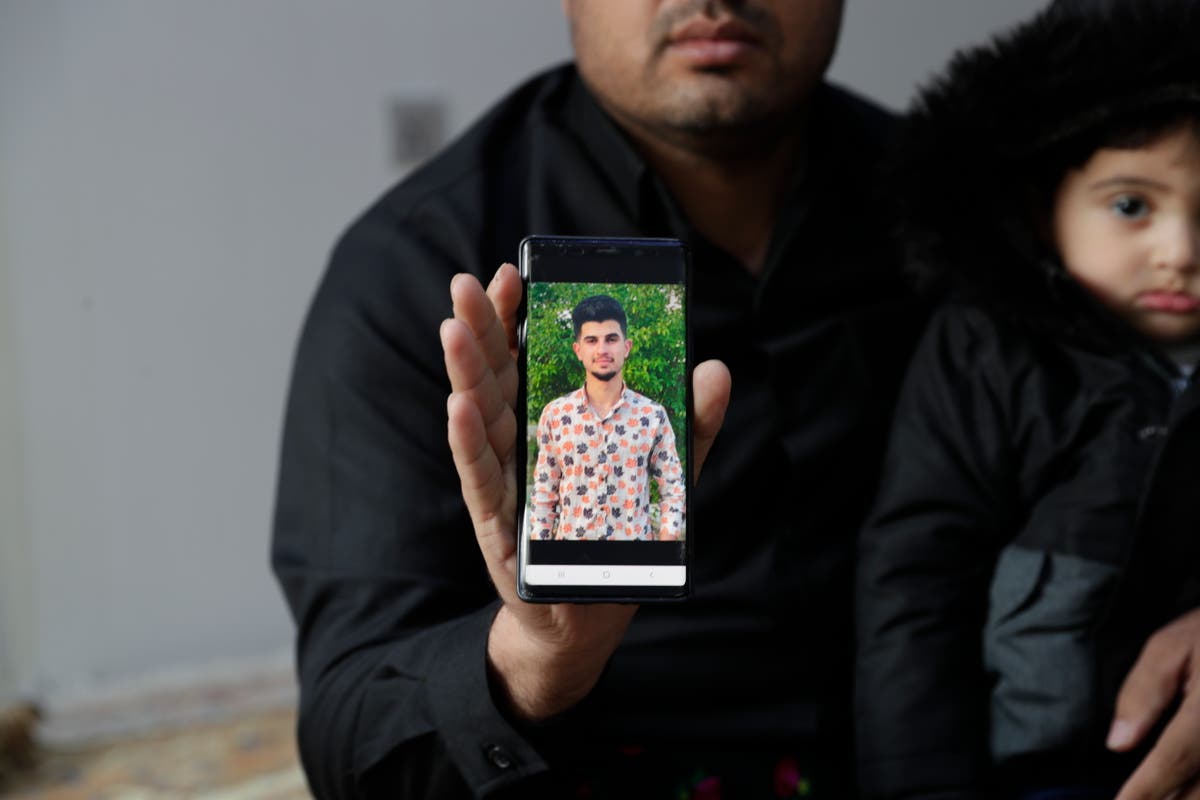 Shoes pile up outside the Mamand home in northern Iraq from relatives and friends who have streamed inside to offer solace as they anxiously await news of the family’s young son, who was lost at sea somewhere between France and Britain

Most are afraid to articulate their fear that 18-year old Twana Mamand may have drowned along with at least 26 others when their flimsy boat sank near the French coast last week. They had been bound for Britain with hopes of starting new lives.

Zana Mamand, 33, wiped away tears and vowed to take revenge against the family of the smuggler who arranged for his brother’s journey. “I know him, I know his family here, I have all their phone numbers,” he said.

In Ranya, a town of about 400,000 in Iraq’s Kurdish-run region, the plight of the migrants seems to be a topic that everyone knows something about.

Those who want to get out ask local travel agents to connect them with smugglers in Turkey and elsewhere. Those who have returned from failed attempts hang around the main park, eager to try again. At the police station, officers say they can’t stop the smugglers.

Many victims of the English Channel tragedy are believed to be Iraqi Kurds, who seem to make up the majority of Middle Eastern migrants seeking to move to the West. Although northern Iraq is more prosperous than the rest of the conflict-scarred country, growing unemployment and frustration over corruption is forcing many to consider the risky journey to Europe

About 28,000 Iraqis left for Europe in 2021, with about 7,000 from the Raparin district that includes Ranya and the nearby town of Qaladze, said Baker Ali, head of a local association of refugees returning from Europe.

Twana had tried and failed five times to cross the English Channel from Calais before he boarded a small boat on the evening of Nov. 23.

The routine was the same: Ahead of each attempted crossing, smugglers would select a travel office in Ranya where Zana would deposit money.

That night, Zana spoke to his brother by phone just before midnight. He asked about the weather, the boat and the others with him.

“The boat is not good,” he recalls that Twana replied, explaining it was too small, and there were 33 people waiting to cross — too many for the vessel.

They spoke again at 2:05 a.m. on Nov. 24. In a four minute call, Twana laughed and joked, telling his older brother they would be docking in an hour’s time. Zana was tired, and asked his sister, Kala, who lives in the U.K., to stay online.

In his last message, Twana said the engine wasn’t working.

A STRUGGLE TO FIND WORK

Twana was athletic and particularly adept at soccer. Zana proudly showed photos of him charging down the pitch with the ball, a look of steely determination on his face.

He didn’t care much for school, doubting it would ever land him a job. But almost everyone in the family struggled to find work. Zana, a firefighter, seldom received his wages on time or in full. Sometimes, Twana would work as a laborer for 12 hours a day, earning 15,000 Iraqi dinars — about $10.

When he turned 18, Twana said nothing would stop him from going to Europe. The trip would be costly: $13,000 to cross from Turkey to Italy. From there, Twana would have to find his way to Calais, France. Then, it would cost another $3,000 to cross the channel to the U.K.

With a Turkish visa, he traveled to Istanbul in September and found that there were plenty of smugglers from his home region, including Ranya and Qaladze.

Twana tried and failed three times to cross from Turkey to Italy, each with a different smuggler. The money, obtained by borrowing and putting their father’s home up for sale, was deposited with a designated travel agent who pulled it back each time the ventures failed, Zana said.

When Twana finally reached Italy in late October, the travel agent sent the money, he said. The same procedure was used when Twana made it to Calais.

FINDING ‘THE BEST SMUGGLERS’ FOR CLIENTS

Here, the 35 year-old travel agent summed up his business: “I help people find the best smugglers to take them to Europe.”

He has high standards, he said, working only with those who have helped people reach their destination with the fewest complaints. The smugglers are his relatives, including a brother in Turkey.

He helped over 500 people this year, a number that has risen steadily, he said. Most want to go to the U.K. where they have relatives who sought asylum years earlier. Smugglers tell would-be migrants to leave a deposit with Omar once they have a visa for Turkey.

From Turkey, most are smuggled to Italy via risky sea routes. Others try for Greece or Bulgaria.

Omar acts as an intermediary between the smugglers and the migrants and their relatives in Iraq, using the so-called hawala network in Muslim countries in which individuals rather than banks act as brokers for money transfers. He only releases funds via hawala once all sides give approval.

He sometimes sends funds directly to migrants who “run out of money and sleep in train stations in Italy, or become sick,” Omar said.

One smuggler from Iraq’s Qaladze area said he began sneaking people into Poland from Belarus in July. It was easier than other routes, he told The Associated Press by phone, because Belarus had loosened visa restrictions, and he had a friend in Poland who drove migrants to Germany for a fee.

But after tensions mounted along the Belarus-Poland border in November, business stopped, said Shwan, who didn’t give his full name because he feared getting into trouble with authorities.

When word reached Zana that his brother might have died, he went to the office of the agent with whom he left his deposit, and threatened him in a fit of rage. The agent told him how to reach the smuggler, who calls himself “Bashdar Ranya,” a pseudonym.

Since Ranya is relatively small, Zana soon found the smuggler’s family. He threatened to send information about the smuggler to his sister in the U.K. to report them to the authorities.

Zana later was contacted by the elusive smuggler via Facebook’s messenger app, in which he said in a voice message that he was on the run in Germany.

Zana played the message for an AP reporter, the recording breaking the mournful silence in the Mamand household.

“I am sorry. It was a surprise to me too,” the voice said of the sinking. “I will compensate you.”

Attempts by AP to reach the smuggler through a contact in France provided by Zana were unsuccessful.

Authorities can do little about the smugglers, said Hazhar Azawi, director of Kurdish security in Ranya. “The smugglers are in Turkey. They (Iraqis) get a visa to go there, so what can we do?”

Lt. Shorsh Ismail, a spokesman for Ranya’s police, said authorities are aware of the travel agencies’ activities but can do nothing without an order from Kurdistan’s presidency.

Omar, the travel agent, said he does not believe he is doing anything wrong, insisting: “I am helping people.”

In the town’s nearby park, 24-year-old Alan Aziz recalled his own failed attempt to reach Italy. He was on a boat in the Mediterranean when the currents took him to Libya instead. He spent nearly a month there before being repatriated.

“I need his help,” he said of seeing a travel agent. “I want to try again for Europe.”